God Doesn't Like the Sick, the Hungry, the Poor, the Homeless? 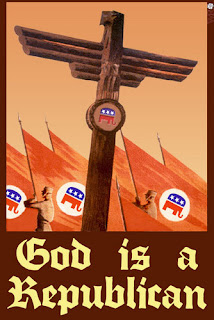 An interesting thing happened on the Sean Hannity radio show Friday. The right-wing talking-head, while discussing health-care reform and U.S. aid overseas, accused liberals of playing the religion card to impose their belief that it's Americans' moral obligation, and the work of God, to help those less fortunate. He mocked the liberal ideal that it's wrong for one nation to be so wealthy while children the world over go hungry. Feigning righteous indignation, Hannity preached to his 'great-American,' God-fearing listeners how wrong it is to hide behind the cloak of religion for political purposes.

Funny how we never hear any self-righteous criticisms from Hannity when the Republican Party exploits God and religion ad nauseam in order to indoctrinate Americans on its anti-abortion, school prayer, assisted suicide, life support, Christmas celebration and anti-gay propaganda. But those pesky poor folk? The hungry? The Sick? The homeless? Well, according to Hannity's logic, God doesn't care about these people...unless of course they're trying to get an abortion, marry their same-sex partner or committing some other blasphemous act. But use religion to feed, house and care for people less-fortunate? Shame on liberals.
Posted by The Ostroy Report at 8:14 PM

Amen, Andy! That's why politics and religion can't and shouldn't mix. There will be, if you'll pardon the pun, hell to pay by Hannity and his ilk one day for invoking God's name for their own political ends--invoking it always in vain.

These days I am reading the book "Christ is recrucified" by Nikos Kazantzakis and your article hit home for me.

So many of these church-goers believe that if you are poor, you deserve it. More than that, you represent what they are not, and they want you to stay that way in order to preserve their share of the pie and thei elevated self-esteem. Try talking about the causes of poverty and they treat it as black and white issue, yes or no question. They are the types that want or give answers in less than 20 seconds. No greater picture, no multiple dimensions, no structural obstacles to development, no nothing.
It pains me to see how religion has been abused by people. It pains me even more to see organized religion not taking a stand against this hijacking of Christianity. The Pope sure became pretty vocal when it comes to the use of condoms in Africa,showing that religious dogma is more important than saving lives. Or when he threatend with excommunication women who decide on abortion.

Oh Andy you do so tell it like it is!! Best wishes to you and yours.

We are told to render under Caesar that which is Caesar's and unto God that which is God's. THe governmnet has it's civic duty and each of us, as Christians, has our spiritual duty.

It is not up to the government to decide spiritual issues. However, since our government was founded on the tenets of Christianity, we don't allow murder, rape, theft. If we start accomodating all relgious beliefs (their interpretation of God's will) we will appease those who demean women (there's still a little trouble with Paul/Christianity in some churches), allow legal rape, sacrifice animals, and on and on.

Chrisitans are told that when we do unto the least of them we do unto Christ. Feed the poor. Visit the sick. It says each of us must do that as our spiritual duty.

It is the duty of each of us to help/feed/do good unto our fellow human beings. It is not the job of the government. It's too easy for an individual to "let the govrnment do it" than take God's direction as a personal command of God.

The government can pass civil/Caesar's laws.

Our government is about to say old people have little value so let them die. Whose interpretation of God are they following in that idea? I don't think it's just a "civic" matter.

There's is a vengeful god

anon @ 10:50,
You are wrong when you say: "However, since our government was founded on the tenets of Christianity, we don't allow murder, rape, theft."
Our country was founded on Common Law. The founders could all only agree they were "deists" who believed a supreme being created the universe and that logic, reason and observation of the natural world (basically the scientific method) was all that was needed to prove it.
Remember this was close to the end of the age of Enlightenment and "theism", with it's relience on miricles, revelations and faith, was not in favor. Reason was, and is seen at every phrase in the founder's documents.
Reason is diametrically opposed to faith, miricles and revelations.

A comment on the attempts to inject religion in to politics:
I was reminded today by Senator Coburn of how dumb our our reps are, or perhaps how dumb they think we are. Cobern use a Thomas Jefferson quote from the Virginia Statute for Religious Freedom (a source for the Bill of Rights) on the Senate floor:
"Compelng [sic] a man to furnish contributions of money for the propagation of opinions which he disbelieves is sinful and tyrannical".
As out of context and gramatically adjusted to fit his edit, anyone who knows it's real context (or looked it up) would know how it totally undermined his argument.
Some more context:
"[...] that the impious presumption of legislators and rulers, civil as well as ecclesiastical, who, being themselves but fallible and uninspired men have assumed dominion over the faith of others, setting up their own opinions and modes of thinking as the only true and infallible, and as such endeavouring to impose them on others, hath established and maintained false religions over the greatest part of the world and through all time; that to compel a man to furnish contributions of money for the propagation of opinions which he disbelieves is sinful and tyrannical;[...]that our civil rights have no dependence on our religious opinions any more than our opinions in physics or geometry, that therefore the proscribing any citizen as unworthy the public confidence, by laying upon him an incapacity of being called to offices of trust and emolument, unless he profess or renounce this or that religious opinion, is depriving him injuriously of those privileges and advantages, to which, in common with his fellow citizens, he has a natural right,[...]" T. Jefferson
Read it in full here:
http://www.lva.virginia.gov/lib-edu/education/bor/vsrftext.htm

Thomas Jefferson, whether deist or atheist wrote THE JEFFERSON BIBLE, in which he compiled the teachings of Jesus, claiming they were the most ethical concepts the world had known. They were the basis of Jefferson's thinking.

Some of our Founders were deists and some were not. They all finally agreed on the principles on which our country was founded.

Let's leave tne Constituion as it is.