The Nattering Naboblicans of Negativism 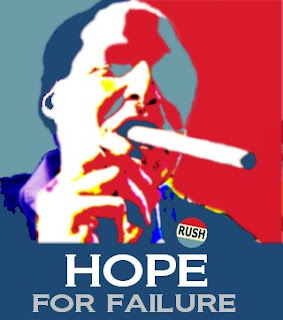 I have this friend out in LA. We'll call him Brad. Brad's a 100% narrow-minded, lock-steppin', self-serving, gated-community livin' Republican business owner (started by his dad) without an ounce of compassion for those less fortunate. All of which I can easily accept. I'm all for capitalism, political diversity and nepotism. I can even accept the wanton disregard for those in need. But what I can't accept about Brad is his shameful anti-Americanism. And there are plenty more Republicans just like Brad, lemmingly led by Rush "I want Obama to fail" Limbaugh.

Accusing someone of being anti-American is a serious charge, and I don't take it lightly, whether I am referring to Brad or whether the charge is hurled at politicians by the opposition simply over policy differences. So what makes Brad anti-American? It's simple. Brad is rooting for our president to fail. He is rooting for the economy to fail. He is rooting for the stock markets to fail. All because, to Brad, this failure translates to partisan victory in November. Brad, like so many Republicans, cheers with celebratory glee whenever there's bad news on Main Street or Wall Street. And there's nothing more unpatriotic than to want your government and financial system to fail, particularly for political reasons.

Brad's America-hating takes the form of gloating, sinister, "See! I told ya so!" emails every time there's a big drop in the Dow. Never mind that preceding this drop could've been a six-month rally where the Dow climbed 60%. He'll also email when the monthly jobs report comes out, but only if it's bad. Back in April, when 290,000 jobs were created, not a peep from Brad. Rather, he just sits and waits for the negative news, and then pounces. And quite happily, in some perverse, disingenuous manner. "Yay, the market tanked!....Yay, there are no jobs being created!.....Yay, things are bad and are getting worse!"

What I don't get though is that Brad owns a successful business, a beautiful home and has a fat retirement account and two great kids. But you'd never know this judging from his sheer delight at even the slightest prospect of economic weakness. It's as if he'd rather be destitute, so long as Republicans regain power in November. And that's un-American, let alone just plain moronic.

But Brad is merely a symbol. He personifies today's highly charged, vitriolic partisan landscape, where one's misguided political passions often dwarf his own self-interests and those of his family. Is it possible that we can just be American on some issues? We all have a vested interest in seeing the economy recover. We all want to protect American's interests, both here and abroad. We all need improved health care coverage. We all breathe the same air and drink the same water. Does everything have to go through some convoluted partisan lens that turns bright, otherwise rational people into rhetoric-spewing automatons who root for failure?
Posted by The Ostroy Report at 7:26 AM

Never mind that most of what Obama is dealing with was dumped in his lap by W and the repubs.

Nothing Obama does or will do will satisfy the righties. They are so blinded by hate that they can't think straight. If Obama and Jesus Christ himself put on wet suits and went down and plugged the leaking oil spill, the righties would say Obama was using Jesus and plugging the spill as a political moment.
They are beyond disgusting. I can't wait until angry white males are in the minority. They are the ones who destroyed our country. I hope the Dems can hold on for the midterms.

I'm sure that Brad had doppelgangers in Weimar who insisted that their accommodations for travel to that new resort in Poland were just a screw up by the untermenschen. One just can't get competent slaves anymore!

Brad just might, if he were a sentient being, learn something from my word verification: "carma".