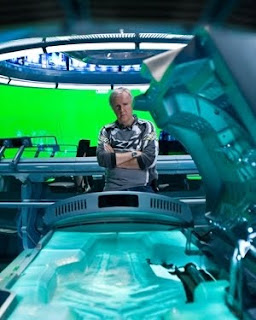 An astonishing thing happened this week. The U.S. government brought in Messianic movie producer James Cameron to help figure out how to stop the oil from gushing from BP's catastrophic well a mile deep in the Gulf of Mexico. And why Cameron? Because he made a monster hit movie where he used some nifty equipment and technology to film the sunken Titanic. Apparently that makes him an expert in fixing the worst environmental disaster in our nation's history. Within 24 hours of Cameron's 'investigation,' the megalomaniac self-proclaimed "king of the world" was already calling everyone "morons." Only in Hollywood, folks.

But this got me thinking. Why stop at Cameron? If his movie -making experience makes him infinitely qualified to tackle extraordinary environmental clusterfucks like the Gulf spill, there's certainly other entertainment icons with the oceanic expertise to perhaps find a solution as well.

How about Ouji-boarding Richard Basehart, star of the 1960's hit show "Voyage to the Bottom of the Sea?" I'm sure 'Admiral Harriman Nelson' would know a thing or two about well-kills, no? Or "Waterworld's" Kevin Costner? He battled the evil forces that engulfed the Earth in water. Can't he plug up a little ole oil well with his various rusty junk and grimy debris? And then there's SpongeBob. Can't he just gather his entire species and simply soak up the oil? Or how how about the Little Mermaid's King Triton? For Pete's sake, he's the boss of the entire ocean. If he can't fix this mess no one can.

In the meantime we have the utterly inept BP, the impotent Obama administration, and Cameron. Somewhere Bush and Cheney are smiling.....
Posted by The Ostroy Report at 9:15 PM

This writer needs to do a bit more research before dissing James Cameron. James not only used a lot of nifty underwater technology, he paid to develop it. James Cameron's brother Michael is a well known oceanographer who has designed and built some of the most advanced remotely operated vehicles used in deep water exploration today, funded by the commercial success of James Cameron's movies.

James may be a bit caustic with his "Moron" comments, but nobody can say he is wrong, and he could hardly do any worse than the BP experts or US Government have done so far.

I love this blog - your bittersweet sarcastic assessment of the vapid hollywood airheads, living on their make believe scripted planet, money where their brains should be, is brilliant and were it not such a devastatingly sad subject, would be hilariously funny.
I have an idea: - why not bring in all the plumbers of the world. Arent they the ones who plug up all the leaks & stopped pipes? Joe the plumber, where are you when we need you -
Stay on it Andy -

Your article is kinda lame, He knows more about underwater diving and deep water ROV technology t osee through BP's lame efforts to NOT stop the spill. Try and read between the lines a little.

James Cameron is considered to be an expert on underwater filming and remote vehicle technologies.

But not to worry, the US government has decided that he can't help after all.

Sorry, Andy. While I know that this seems ridiculous on the face of it, Cameron has been involved in deep water projects for years. He's well-connected in these circles, and he knows who to pull into this sort of thing.

Cameron may very well be an egomaniac and an asshole, but if he has resources that can help, where's the problem?

Russians already offered help with their new technology and ready to plug the gash with newly patented "spring."

They offered to fix this problem for FREE...

Sorry folks. I stand by my blog. The suggestion that what Cameron's achieved in filming Titanic somehow gives him the tools/expertise to suggest how to plug an exploded well that's gushing about 30,000 barrels of oil a day is just preposterous. I give him all the props in the world for making billion dollar-grossing movies and for perhaps becoming an expert in diving and related technology/equipment. But that's where it stops...which is why Obama's sent him packing back to La la Land with a 'thanks but no thanks.' Jeez, should we bring Keifer Sutherland to DC to help fight Al Qaeda because he battles terrorists on TV?

Obama needs "the Thunderbirds"... Put in a call to "International Rescue" Those puppets will save the day... US Govt has lost it.

I suggested Harry Stamper (Bruce Willis) of Armageddon fame - he was an oil rig driller who saved the world by dropping a nuke into a comet. Seems like a good choice!

You actually believe in Al Qaeda?

And your mission is to "support our new President."

I've seen all I need to see here.

my way was actually better at fixing it, and it wont cost a dime. just take all BP owner and executives and anyone that works for BP, take their bodies and throw it down and try to jam it that way. What BP has done is too much. the only way to stop this is to execute all those involved in it. i got a gun we can use for their heads. i would love to kill them for free if society permits it or not.

These comments all ignore the 800-pound donkey in the room: Obama is tapped out, demonstrating the totality of his leadership ability in floundering about for anyone to take the Gulf Oil Disaster off his hands. Gov. Bobby Jindal, for all his flummery, is acting more like a leader than Obama currently is, even if Jindal's sand berm idea isn't going to work, and is already too late to do much even if it were to protect against the onrush of oil.

In a nation Cameron helped to create with his imagery-over-substance art form, that he could even be considered as having a solution to the problem demonstrates how far this nation has sunk. That after the last year we can still have a hope that Obama will rise to the challenge and be the leader he was elected to be shouts volumes about the lack of intellectual ability of the average American.

Obama is about finished as a leader, and so is the US. We have amply demonstrated only the ability to kill and destroy, and who in the world wants that for their offspring?

Carbonara: Yes, my mission is to support Obama (shouldn't that be the mission of every patriotic American?), but as you can see from this very blog post I am can readily criticism him and his administration...something you lock-stepping Republicans just can't seem to do with your own leadership. And...don't go away mad. Just go away. And don't let the door hit ya on the ass. For future reading, may I suggest EverythingLeftBadEverythingRightGood.com. Sounds like that's all you can handle....

Realist: Bobby Jindal? Seriously? Besides scream and yell like my 6 year old, what exactly has he done to demonstrate more leadership than Obama? Just because Obama doesn't throw dramatic public hissyfits doesn't mean he hasn't been on this thing from day-1. My goodness, the worst environmental disaster in America's history--one that BP and all the experts/consultants can't figure out how to fix....yet Obama's supposed to have the magical cure.

Carbonara: Yes, my mission is to support Obama (shouldn't that be the mission of every patriotic American?), but as you can see from this very blog post I am can readily criticism him and his administration...something you lock-stepping Republicans just can't seem to do with your own leadership. And...don't go away mad. Just go away. And don't let the door hit ya on the ass. For future reading, may I suggest EverythingLeftBadEverythingRightGood.com. Sounds like that's all you can handle....

Realist: Bobby Jindal? Seriously? Besides scream and yell like my 6 year old, what exactly has he done to demonstrate more leadership than Obama? Just because Obama doesn't throw dramatic public hissyfits doesn't mean he hasn't been on this thing from day-1. My goodness, the worst environmental disaster in America's history--one that BP and all the experts/consultants can't figure out how to fix....yet Obama's supposed to have the magical cure.

Yes, Bobby Jindal. Despite the fact that I despise the putz, he's out there attempting to deal with the effects of the oil spill while Obama's pet Coast Guard Admiral is having dinner with Tony Hayward in a toney New Orleans restaurant.

While piling sand berms along the beach isn't going to help much, where is Obama marshaling the world's supertankers to suck up as much oil as possible BEFORE it hits the beaches? Instead, he stands before the cameras, posturing like an eight-year-old loudly pointing fingers at the baby so as not to get blamed for the broken cookie jar lying on the floor. His actions scream of cover-up and distraction so that one of his largest benefactors can get away with huge corporate crime. And if you doubt this can work, check out the Bhopal verdict against Union Carbide. Up to 25,000 dead Indian citizens denied justice because corporate money is "free speech" - even in India.

Instant Karma Dept: my "word verification" as I write this is "manisrat" - and I can't find a better description of Obama than "man is rat"!

I'm sorry, friend. But your characterization of Obama's leadership in this crisis. Is WAY off base. I'd like to know from you or anyone else--besides being on TV more, besides yelling and screaming and "acting angrier"--what exactly should he and the administration be doing...and please be very specific...to "fix" this disaster. I hear all the generic anti-Obama rhetoric, but no one seems able to offer up any tangible, substantive suggestions as to what he hasn't done. Obama's leadership in this is not some reality TV show where he has to play a part. If you think behind the scenes that he and his team haven;t been on this from day one you're very naive....and falling into the Repubs' trap...