Spill, Baby, Spill! How the Left Can Win the PR War 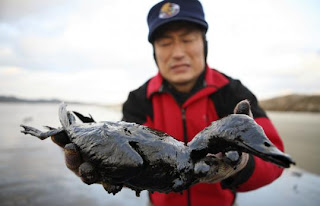 Let's face it. Republicans are pretty masterful at creating catchy, effective soundbites to define the issues, frame the debate and sway public opinion. Case in point, "Taxpayer Bailout," "Death Panels" and "Drill, Baby, Drill." And while they're making things simple for voters, Democrats bore them to death with long-winded, over-intellectualized, nuanced explanations. If the left's ever gonna take back control of the message, they'll need to start dumbing-down their rhetoric so that it's clearly understood by the little guy. Because, unfortunately, the little guy doesn't want, need or understand all the details. It is possible for Democrats to start winning the public relations war. They just have to start thinking like Republicans.

For example, the ubiquitous Sarah Palin has become even more infamous in coining the Drill, Baby, Drill mantra. While it lacks substance and sneers at the inherent dangers of unregulated offshore drilling, it sticks. It's repeated incessantly like the best propaganda, and has become part of the current political lexicon. So why can't Democrats counter this gibberish with "Spill, Baby, Spill" to drill its own powerful message into the heads of voters? You'd think the catastrophic BP oil spill would provide the perfect setting for Dems to own this debate, right? Two months into one of the worst environmental disasters in American history, there's 60,000 barrels of oil gushing into the Gulf of Mexico each day with no end in sight and months, if not years, of costly cleanup ahead. You'd think voters in the region and throughout the U.S. would be outraged to the point of being very sympathetic to a crafty little soundbite like Spill, Baby, Spill, especially as the disaster is ruining people financially, damaging marshes and killing wildlife.

We have a boneheaded New Orleans District Court judge this week overturning President Obama's 6-month moratorium on offshore drilling. And we have myriad Repubs in and around Washington like Palin, Rep. Joe Barton, Rep. Michelle Bachmann, Rand Paul and Rush Limbaugh serving as apologists and defenders of BP at every turn. Clearly, no matter how horrific the damage and despair caused by BP's spill, Repubs continue fighting for more unregulated offshore drilling as if nothing's happened. They're still ramming their extremist right-wing pro-business ideology down the throats of Americans while the left appears impotent in the PR war. Why? Why can't Democrats turn this situation into political currency? Why aren't they ramming "Spill, Baby, Spill" down these same throats? And here's a few others I thought of in less than a minute: "Protecting Big Oil," "No More Apologies," "Taxpayer Shakedown" and "Fighting for Fisherman." Where's the left's propaganda like this? Sometimes, especially in politics, less is more. Sarah Palin's teaching us that right now. Democrats would be wise to follow suit. Two or three very powerful, debate-framing, issue-defining words repeated ad nauseam go an awful long way these days...


On another note, we could use your help at The The Adrienne Shelly Foundation. We're a 501 c 3 tax-exempt, non-profit organization dedicated in my late wife's honor, and with a simple mission: supporting women filmmakers. Adrienne, who wrote, directed and starred in the hit film WAITRESS, was killed November 1, 2006. Through the Foundation, her commitment to filmmaking lives on. We've established scholarships, grants, finishing funds, screenwriting fellowships and living stipends at NYU's Tisch School of the Arts/Kanbar Institute of Film; Columbia University; American Film Institute; Women in Film; IFP; the Nantucket Film Festival; the Tribeca Film Institute; and the Sundance Institute. Your generous contribution will go a long way towards helping us achieve this very important mission. Please click here to make a donation. Thank you.
Posted by The Ostroy Report at 7:26 AM

I hate to say this, but another spill would serve those repubs right.

If the voters think the repubs have the answers to our problems (cut taxes), they are really insane.

Similarly, it's the "Bush Recession."

What we really have is a toothless Federal response to the worst environmental disaster in our history. That much can't be ignored.

And since all Federal agencies responsible for the response are controlled by Obama and the Democratic congressional majorities, it's hard to miss that the blame for the poor response lies at their feet.

You can make all the noise aimed at distracting people from that simple truth. You can even fail to report that Obama took $900K from BP interests when he got elected - more than anyone else - and has refused to give back a dime of the money. Better, he should take that money and give it to those affected by the disaster.

At the end of the day, this mess is something that Obama could have prevented by shaking up the agencies responsible for overseeing the kind of drilling that resulted in this mess. He was aware of the problems and made a commitment to do so, but it fell through the cracks as he was busy trying to turn America socialist.

And then he completely dropped the ball in mitigation.

That much can't be ignored and whatever you say about Republicans, that much is without a doubt the single biggest reason why we are in the sad shape we are in.

The Democrats have sold their souls to be a part of the elite which thinks it will survive the coming social upheaval. They are mistaken, for they can't hire enough mercenaries to protect them from our remake of the Storming of the Bastille.

Too big to fail or jail