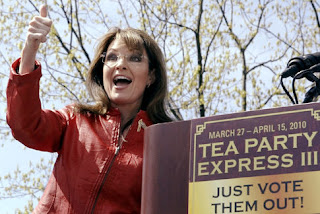 Sarah Palin has that magic touch. Three of the four candidates she endorsed in Tuesday's Republican primary elections were victorious: California's Carly Fiorina, who'll be running against Democratic Sen. Barbara Boxer; South Carolina's gubernatorial candidate Nikki Haley; and Terry Branstad, who seeks Iowa's governor's mansion. But just as John McCain learned in 2008, these victors will discover in November that Palin's magic is like Cinderella's carriage: Just when the party's getting hot it's pumpkin time.

Somehow, somewhere, someone ordained Palin the new head of the GOP, with special Tea Bag honors, and have deluded themselves into believing that who and what she touches today will mystically turn into November 2nd gold. Truth is, it'll be just the opposite. She's gonna single-handedly bring down the party's chances of winning back power. Just ask ole Johnny Boy.

Case in point Nevada, where Tea Party darling Sharron Angle won the GOP's nomination and will take on the highly vulnerable Majority Leader Harry Reid. Angle, widely believed to be the weakest of the three Repubs who vied for the spot, just handed Reid a gift; his best chance yet to retain his Senate seat. Reid's campaign, in an email Wednesday, is already painting her as the radical Lipton Loon she is: She wants to repeal health care reform; is against financial reform; seeks to cut Social Security benefits; and scoffs at global warming. Thank you Sarah Palin.

Over in South Carolina, Palin is betting that voters want to trade in their outgoing philandering Gov. Mark Sanford with the allegedly twice philandering Haley. Again I say, Thank You Sarah Palin.

Sarah and The Tea Baggers can crow all they want, and the mainstream media can stir this hyperbolic pot and make her out to be the Great Annointer, but her arctic awesomeness will last only as long as the primaries will allow. This is exhibition baseball folks, not the regular season. Just ask ole Johnny Boy. He got a firsthand dose of reality in terms of what mainstream Republicans and independents want. And...um....er....it wasn't Palin's brand of dim-witted, snarky, polarizing politics.

On the morning of November 3rd, Democrats across the country will be saying Thank You Sarah Palin. They might even toss in a heartfelt gracias as well to Beck, Limbaugh, Hannity, Newt, Bachmann and the inimitable tea-totin' team of Rand and Ron.

Oh, and here's a little vintage Palin to remind everyone just who we're talking about....

Posted by The Ostroy Report at 7:51 AM

Andy,
There is no governor's contest in Virginia this year. You have mixed up your facts with South Carolina.

Who picked Sarah Palin? Who gave her the job at Fox!

The only real hope may be coming from David Corn, who is of the opinion that the Tea Bagger message has been exposed to the light too long to remain palatable for most of the voters. [see: http://www.politicsdaily.com/2010/06/09/tea-party-losing-its-strength/]. While I want to believe this, I reserve further comment until I see what develops.

I wish this were true - that Palin would doom the GOP's chances of retaking both houses of Congress (and thus effectively ending the Obama presidency two years early) this November. However, let me give you a scenario from my home state of Texas which illustrates how far we "liberals" are separated from the current state of reality in this country. I have a coworker who LITERALLY worships Sarah Palin. Her office/pod is essentially a shrine to the woman. This coworker receives all of her information exclusively from conservative media (Fox, Rush, etc.). She HONESTLY believes Obama is a tool of a demon. As nutty as she sounds, she represents thousands, if not millions, of my fellow Texans. Just last week, my aunt, normally a perfectly sane woman, was despairing for the state of the union since the "communist" in the White House was conspiring with eco-terrorists to destroy the economies of the Gulf Coast states.