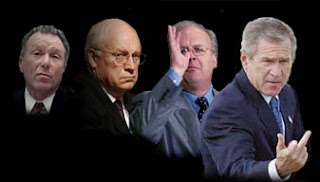 In his NY Times op-ed piece Monday entitled "The Separation of Politics and State," Richard Painter shines a spotlight on what he suggests is the Obama administration's unethical conflating of partisan politics and policy. And he ought to know a thing or two about ethics, or a lack thereof, as he served from 2005-2007 as George W. Bush's chief White House ethics lawyer.

"It’s unfortunate," Painter writes, "that his (Obama's) White House staff remains so deeply immersed in partisan politics, as demonstrated by the administration’s offering a presidential appointment to try to dissuade Representative Joe Sestak from running in the Pennsylvania Democratic primary against Senator Arlen Specter. There were similar discussions with Andrew Romanoff, a former speaker of the Colorado House, who is challenging Senator Michael Bennet."

First, there is nothing illegal or politically ground-breaking in Obama's supposed job offers to Sestak and Romanoff. Presidents from John Quincy Adams to Richard Nixon and Ronald Reagan allegedly did the same (as I'm sure every other president has in one fashion or another), and so did the Bushies in 2004 in purportedly dangling the Secretary of Agriculture post to Nebraska Sen. Ben Nelson if he agreed not to run for re-election.

But more critical to point out are the many truly ethical transgressions, and perhaps illegal acts, committed by the Bushies between 2000-2008 (and I'm not even talking about the robbery of Al Gore's presidency). A few episodes below:

Back in 2006, Bush's Justice Department engaged in the unprecedented midterm dismissal of seven United States Attorneys. The firings prompted a Congressional investigation into whether the Bushies fired these lawyers in an effort to obstruct the investigations of Republican politicians, or, because they failed to initiate investigations that would damage Democrats.

Another example is Bush/Cheney/Scooter Libby's despicable, unpatriotic act of outing CIA agent Valerie Plame because her husband, former Ambassador Joe Wilson, wrote a NY Times op-ed piece refuting the Bush administration's claim that Saddam/Iraq was seeking to purchase yellowcake uranium in Niger. In his piece, "What I didn't find in Africa," Wilson concluded that the Bushies sought to "exaggerate the Iraqi threat." As punishment for his actions, his wife, Plame, was exposed as a covert operative. Her CIA career was therefore over, and her life put in danger, as well as the lives of her fellow operatives at "Brewster, Jennings & Associates", her front company.

And as "Bush's Brain" Karl Rove so cavalierly demonstrated for eight years, no administration in history blatantly used its political apparatus to influence policy more than the Bushies. This includes sending U.S. troops to die in an unjust war; illegal wiretappings and domestic spying; and obstruction of 9/11 commission investigations.

So it's a bit dubious and unsurprisingly hypocritical for Painter, who was in the thick of some of this political chicanery in Rove's West Wing, to attack Obama and use his administration as the poster-child for partisan opportunism. Funny what short memories the Bushies have.
Posted by The Ostroy Report at 7:43 AM

It doesn't matter what Bush did. We elected Obama to "fix it." When a doctor errs in my treatment I go to another doctor to "fix it." I don't expect him to say "Dr. Bush is the cause of your problem."

This move is only a counter-attack against the strategy of blaming Bush/Cheney for many of the ills facing the nation today. It is no different than the strategy the GOP has followed since losing Nixon to Watergate. The sad thing is that the American voter has demonstrated great susceptibility to this strategy, for since it is successful, it continues to be used by some of the greatest criminals in history.

I have said repeatedly that this was not illegal. I have said that it happened before. The Administration has cited my views on this against the accusations of partisan Republicans.

I wrote a book that went to press in 2008 criticizing the White House political office. Its time to stop attacking people from the other political party and shut this operation down. It has not worked in the past and will not work now, regardless of who is in office.

The Bushies don't have short memories, they just think we do.

Richard (assuming this is in fact you and not someone posing as you), I appreciate the response to my piece. But what I most take issue with is that in your NY Times op-ed you apparently are holding the Obama administration to a higher standard than that of your former bosses Bush and Cheney. Nowhere in your piece do you mention Bush & Co . It's as if you never worked in the White House and have no frame of reference. I also take issue with your contention that playing partisan politics never works. It certainly did for the Bushies. Rove was/is a master at it, and they benefitted from his vast talents ad nauseum.

I say in the op-ed that "this sort of thing has been business as usual in presidential administrations for a very long time."

I mention that the Office of Political Affairs was set up by President Ronald Reagan.

I mention that political operatives can have undue influence on White House policy, "whether it be political concerns about a United States attorney . . ."

I say that Republicans are wrong to claim that this is illegal.

It should be quite clear that my concerns about political activity in the White House are not specific to President Obama. He is a good President, but he will be more effective if he sends the political operatives over to DNC where they belong.

A lawyer should not discuss in detail matters in which he represented a client, including a former President. I discuss these problems generally to the extent I believe permissible in my book on government ethics, which was sent to press before the 2008 election.

I have supported this Administration in many areas of government ethics, as well as in the nomination of Goodwin Liu to the Ninth Circuit. I recognize that the problem I write about here has been inherited, but it needs to be fixed.

Granted, you do mention these points, but in the overall context of your piece, this intended objectivity comes across like a pimple on a elephant's (pun intended) ass. You come out of the gate blasting the Obama administration, using it as the basis for your suppositions and critiques. You don't mention Bush, Cheney, Gonzalez, Rove; and you essentially characterize this partisan "problem" as if it began in January 2009. This vitriolic partisan landscape was started by and large by Reagan's leg-breaker Lee Atwater. By the 90's, Gingrich and his band of hypocritical, philandering impeachers took the animosity to epic levels in their Clinton witch hunt (which I said then would come back to haunt them once Democrats eventually took over). And then Atwater disciple Rove perfected the art of dirty politics from 2000-'08, to Bush and the GOP's enormous benefit. And now folks like you look to Obama as if he and his party has cast the first stone. There's an old expression: you reap what you sow (or, you make your bed....). The partisan hatred we see today is the Republican bed...

That is not how most people, including many Democrats, read my editorial. The political operatives of both parties feel threatened by it, but very few others do.

This is not abot President Obama or Bush or Clinton. This is about a system that does not work for any President and that will get in the way of this President getting his job done just as it has gotten in the way for others. It perhaps helps with reelection but at a price. Too high a price.

Richard, it IS about OPbama, because that's who you named. And only named.