Obama Finds Cure For Cancer. Republicans Attack Him For Putting Oncologists Out of Work 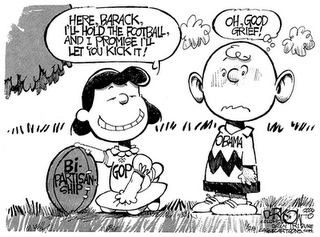 The bitter partisan climate in Washington just got nastier and more irrational as Republicans attacked the Obama administration for discovering the long-awaited cure for cancer, the deadly disease that kills millions of people all over the world each year.

In what should be a celebration of this incredible medical and science breakthrough, it's business as usual on the Hill as the Party of No seeks to obstruct the administration's agenda and downplay its accomplishments.

"I said it earlier in the year and I meant it," said Arizona Sen. John McCain. "We will not support anything this president does, and that includes curing cancer. We'll find a way, as always, to point out how that's bad for America."

And it seems the GOP leadership has found its theme: jobs. "The country is already facing historic unemployment levels," said Senate Minority Leader Mitch McConnell (Ky). "This cure is going to put 200,000 oncologists, chemo labs and funeral homes out of business. It's just another slap of the Obama recession on the face of the American worker."

Jumping on the attack wagon was Sarah Palin, who accused Obama of another government takeover. "It's Socialized Life," she said, coining yet another brilliantly crafty soundbite. "It's Marxism. It's exactly what The Marx Brothers warned about in all their movies."

Mirroring the GOP's strategy during the 2008 presidential campaign, middle-American working stiffs are being used again as the face of the debate. "I'm just an average guy tryin' to make a living and this left wing cure's gonna ruin me," said Joe the Hospice Worker. "Obama is just so out of touch with the needs of the little guy....the healthy little guy."

As predicted, the response from the White House has been swift and aggressive. An incredulous vice president Joe Biden said, "Wait a second. This is fucking huge. We're talking about the cure for cancer, for Pete's sake. It was unconscionable for Republicans to defend BP against the interests of suffering Americans, but this? Are they fucking kidding?"

And in a brief call to Chris Matthews' Hardball, a visibly frustrated and exasperated Obama lamented, "Aww, what's the use. I can't win. I can't even get the right behind me after finding the cure for cancer. Republicans just won't get behind anything I do. Not even if I sucked up all the Gulf oil with my own lips; banned abortion; tossed every immigrant out of the country; or flew to Iran and personally kicked Ahmadinejad's ass."

Obama should take a look at how Truman ran against the congress. It is so frustrating to see good ideas blocked by repubs without even a vote. Many voters who don't see how it all works will give up and not vote.

You are preaching to the choir here! The issue should instead be how to convince the Tea Baggers that the GOP strategy even works against them and their interests. It would be nice to see someone besides Naomi Wolf finding a way to talk to these people - and be heard by them.

Realist....all my blogs also appear on Huffington, where, as I do here, many Repubs read my stuff. No choir.

teabaggers don't do satire. they have no sense of humor that doesn't involve dead people.