The Political Implosion of Sarah Palin 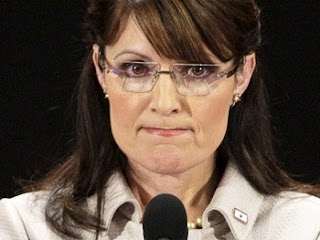 The takeaway from President Obama's brilliant, poignant speech at Wednesday night's memorial at the University of Arizona in Tuscon was, "We may not be able to stop all evil in the world, but I know that how we treat one another is entirely up to us," The tone of his message, his raw emotion, the compassion for the victims and their families, and the genuine concern he showed for the nation exemplified great leadership, and was in stark contrast to the bizarre, self-serving video that his potential 2012 opponent, Sarah Palin, released earlier in the day.

"At a time when our discourse has become so sharply polarized - at a time when we are far too eager to lay the blame for all that ails the world at the feet of those who think differently than we do - it's important for us to pause for a moment and make sure that we are talking with each other in a way that heals, not a way that wounds," the president said.

To be sure, the 2012 presidential election will indeed be about healing. There'll be much focus on how Obama united the nation in the aftermath of Jared Loughner's murderous rampage, and how Palin's true character prevented her from doing the same. It it is precisely this sanctimonious, defiant and soulless video sermon that history will one day point to as the end of her legitimate political career.

Palin was right about one thing: it's unfair and inaccurate to blame her toxic political rhetoric for the Tuscon shooting. But this week she quite foolishly and voluntarily gave us something we can 100% blame her for. Her behavior, tone and overall message in the video was beyond comprehension. Not only does it demonstrate a pathological narcissism, but a supreme ignorance of history (the unfortunate "Blood Libel" reference); a shocking lack of empathy, sensitivity and compassion; a reprehensible use of the words "blood," "pistols" and "shooting" to accent her points; and outrageously offensive timing in terms of releasing it on the same day as the memorial. One has to ask, just what on Earth was she thinking? Did she really expect this 8-minute diatribe to show humility and repair her image? To help heal a shocked and grieving nation?

Over the past three years, many have suggested that Palin's odd behavior and statements constitutes a train wreck. But in a train wreck there first needs to be the actual crash. To date, despite moments of near-derailment, Palin's stayed on track. But with this video she has finally crashed, and crashed for good. She cannot and will not recover from this politically. Oh sure, she will continue to be a national hero to the ravenous, ignorant right-wing fringe crazies who account for a minuscule percentage of the Republican Party, but on a serious national level, as a presidential candidate, she just imploded.
Posted by The Ostroy Report at 7:48 AM

Dear friend, you underestimate two things. One is our incredibly short national memory and two is the fanaticism that surrounds Palin.

Those two things mean she will appear as a fresh alternative to many, sadly, in 2012.

Those who are her most rabid supporters still support her. They will be the primary voters. Remember what they did in 2008?

Oh sure, she will continue to be a national hero to the ravenous, ignorant right-wing fringe crazies who account for a minuscule percentage of the Republican Party, but on a serious national level, as a presidential candidate, she just imploded.

That's the only thing wrong in this piece. The RW crazies are not a miniscule % of the party. They are taking it over.