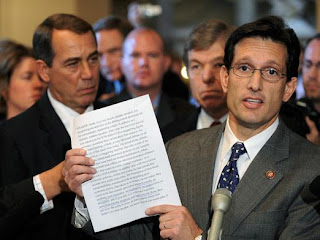 I laughed all the way through Thursday's Wall Street Journal editorial on the repeal Wednesday of health care reform by rabid, over-zealous Republicans. The venerable financial bible's take on the measure is a prime example of how politics is a witch's brew of smoke, mirrors, spin and delusion...with a pinch of disingenuousness tossed in for extra flavor.

The piece begins with comical chest-thumping that the Obama administration's landmark legislation was "repudiated by a majority of one chamber of Congress only 10 months after it passed. This sort of thing never happens." It then states that more House members, 245, voted for repeal than the 219 who voted for it last March. Really? Is this a surprise? I suppose more Congressman will vote against something than for it if they also happen to belong to a party who just won the majority, and whose leadership puts making Barack Obama a one-term president as its top priority over everything else, as Senate Leader Mitch McConnell and others have enthusiastically declared. Ever since it's passed, Republicans have literally been salivating at the thought of repealing health care reform. Did the Wall Street Journal's editorial page editors turly think anything else would happen? Repeal was as predictable as John Boehner crying every other day on the House floor.

The Journal, in a major stretch, also said the three Democrats who supported rescinding the bill "confirmed the bipartisan opposition" to this kind of "vast social program." All of this proves, according to the Journal, that "many Democrats are now bowing to the public mood."

What's funny is that the Journal also published Thursday the results of its new poll with NBC News, in which more Americans (46%) are opposed to repeal than not (45%). And a very strong case can be made that of those who favor repeal, their reasoning is that the law didn't go far enough. Perhaps the Journal should read its own data before commenting on the "public mood."

Republicans campaigned on the theme of "repeal and replace." No one with an ounce of intelligence ever doubted that the first thing they'd do when they took power was rescind "ObamaCare." That's the easy part. They dislike Obama, they hate the bill, they now have control, they said they were gonna do it, and they did it. Yawn. It's almost juvenile in its mere symbolism. The Senate will never take up the repeal measure, and even if they did, Obama would veto it.

But the more important aspect of it all is "replace." Just what do Republicans now plan to offer Americans instead? How will they improve on the bill? What incremental benefits will they propose? So far, all they've talked about is limiting malpractice suits and deregulating interstate commerce by the insurance companies. Sounds like more giveaways to the rich and corporate America than to the poor and middle class. And that is quite predictable as well.
Posted by The Ostroy Report at 7:19 AM

Progressive Democrats also want to make Obama a one term president, if for no other reason than the fact that he is not a Democrat.

Of course, if the Democrats had passed a bill that gave free medicare for all, they would not now be the minority in the House.

About a year and a half ago Bill Frist, of all people, was on Charlie Rose taking the republicans to the woodshed for not fixing healthcare when they were in power.
Now they want to go back to the same old, same old.