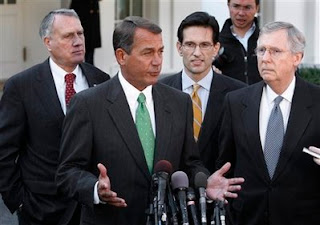 Republicans don't seem to be learning their own lesson from the November midterms. After accusing President Obama in a heated election year of ignoring the economy and unemployment while too focused on health care reform, they're falling into their own partisan trap by obsessing over the landmark legislation and its repeal. What happened to jobs, jobs, jobs? What happened to, 'vote for us, America, and we'll fix the economy and put you back to work!?'

Just a month into their new majority in the House, the GOP's uber-manic focus is exclusively on health care. Republicans rushed to vote for repeal earlier this week and Speaker John Boehner (OH) has directed his members to come up with alternatives that include strict new limitations on abortion coverage. While Boehner & Company promised America a laser-like focus on the still-sputtering economy and its 9.4% unemployment rate, all they're offering is the same tired, self-serving right-wing agenda. They simply can't help themselves.

To be sure, what the GOP is really obsessing over is Obama himself, and a rapacious hunger to undermine him and the Democratic agenda anywhere and everywhere possible. "We're going to do everything — and I mean everything we can do — to kill it, stop it, slow it down, whatever we can," Boehner said just before the election, which ushered in a Republican House majority and gave him its highest post.

Senate Minority Leader Mitch McConnell (KY) at the same time said, "The single most important thing we want to achieve is for President Obama to be a one-term president."

Do Boehner and McConnell think this is the kind of call-to-action that voters bought from them on November 2nd? Where are their economic proposals? Where are the jobs creation bills? What's the GOP's plan for sustainable GDP growth? The Republican leadership is filled with such partisan vitriol, and is so rabid in its desire to undermine Obama, that it's ignoring its own campaign rhetoric and failing to deliver on its #1 promise. As such, it's undermining itself in the process, as evidence by a slew of recent polls showing that voters are fast losing confidence in the GOP's ability to do anything other than obstruct Obama.
Posted by The Ostroy Report at 7:33 AM

As I read the mood of the electorate last November, there was great disappointment in the lack of production by the Democrats fueling their discontent. There was also no small amount of anger over the attitude attributed to Rahm Emanuel that liberals and progressives had no one else to vote for and could be dismissed. The voters proceeded to demonstrate the fallacy of that mistaken belief, by staying home if not voting for Republicans.

Obama had a historic opportunity to win over the otherwise mindless and unemployed GOP voter by putting him back to work. Instead, Obama sold out to the corporatist side and pushed legislation which generated additional profits for an already out-of-control health insurance industry - and got kicked in the teeth by his Republican idols for his efforts. The voters followed suit, demonstrating that Harry Truman knew of which he spoke in regard to Democrats posing as Republicans in their positions.

Now, Obama is about to sell out the retirees by gutting Social Security, long a "conservative" goal. So the issue of "where progressives voters will go" will again raise its head - and unless the Democrats can show that they improved the lot of the average voter, it isn't hard to see how Boehner and McConnell will succeed with their agenda to make Obama a one-term president.

Realist, why do you play such word games by using ther term "progressive"? Are you ashamed of the terms liberal or left-wing?

And what of the implicit argument that pro-lib-left or whatever you call them make that 1) they go first in any debate and 2) responses to their opening of the debate is hurtful to the country?

Following that approach, members of the pro-lib-left movement can claim conservatives were responsible for Tuscon and shut them down when they defend themselves. See, e.g. Olbermann repeatedly asking where is Palin in the face of pro-lib-left charges of responsibility for the shooting followed by his slam that her defense was badly timed and prevented the nation's healing.

Now you seem to be saying that the pro-lib-left movement can pass destructive legislation and conservatives can't pass what they see as curative bills.