The Tuscon Shooting: We Must Place Blame Where It Belongs 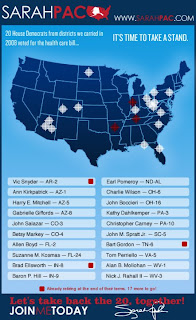 It's been quite disconcerting to see how lamely the mainstream news media has been handling the aftermath of the tragic shooting spree in Tuscon Saturday which killed six people (including a 9-year-old girl) and wounded fourteen others, including Arizona Rep. Gabrielle Giffords(D). There are those, like me, who seek to place the blame squarely where it's deserved: on the backs of right-wing hate-mongering radicals like Sarah Palin, Sean Hannity, Rush Limbaugh and Glenn Beck. But there's a growing politically-correct chorus of "let's not blame" hitting the airwaves that is both shocking and extremely disappointing.

During his press conference following the shootings, Pima County Sheriff Clarence Dupnik, the 75-year-old lawman with balls as big as they come, attributed the violence to "the vitriolic rhetoric that we hear day in and day out from people in the radio business and some people in the TV business." He went even further and criticized his state's aggressive anti-immigration fervor: "The bigotry that goes on in this country is getting to be outrageous. And unfortunately, Arizona, I think, has become sort of the capital. We have become the mecca for prejudice and bigotry."

Kudos to Dupnik for being a true American hero who said what so desperately needed to be said. Saturday's violence must be a much-needed wake-up call for America. The inflammatory rhetoric that's risen to dangerously heightened levels by conservative politicians and talk show hosts has to stop. Was it not just a matter of time before violence like this occurred? Why shouldn't we place blame where it's so obviously deserved?

Can we not blame Glenn Beck for his constant hateful rhetoric against the Obama Administration and Democrats, who he accuses of subverting the Constitution and the rights of "god-fearing Americans?" For "calling for a revolution?" For recklessly joking about "killing Michael Moore?" Or what about Bill O'Reilly, who incited his listeners by relentlessly referring to Kansas doctor George Tiller as "Tiller the baby killer" in the months leading up to his murder? Or Sean Hannity, who so disrespectfully and disdainfully refers to President Obama, who was elected by a majority of voters, as "the anointed one?" And in the most reprehensible, dangerous display of this vitriol, what about Sarah Palin's hit list last March which targeted Rep. Giffords and nineteen others, using cross hairs to mark the districts of these Democrats she was taking political aim at over health care reform? Or how she irresponsibly encouraged her followers "don’t retreat, just reload."

Giffords herself offered this chilling warning after Palin's hit list appeared: "We’re on Sarah Palin’s targeted list. But the thing is the way that she has it depicted has the cross hairs of a gun sight over our district. When people do that, they’ve got to realize there’s consequences to that."

Is it not fair or accurate then to connect the dots to these reckless rabble-rousers and put the blood of the Tuscon victims on their hands? Given the political rantings on his website and in YouTube videos, are we to be so naive as to think that 22-year-old mass murderer Jared Loughner, who took his glock to that supermarket parking lot with the clear intent to assassinate Giffords, was not at all influenced by this steady stream of hate-speak from Palin, Hannity, Limbaugh, Beck, O'Reilly and others? Or worse, have we become so dominated by political correctness that we fail so miserably to directly place blame where it so rightfully lies?

If we simply sit back and pretend that Loughner was nothing more than a deranged young man with no political influences or motivations, then we are sticking our collective heads in the sand and allowing for future violence. If we don't demand an end to the inflammatory rhetoric and the use of code language and images describing and depicting weapons and acts of violence, when demonizing those we disagree with, then Giffords will surely not be the last victim.

We also need to stop all the pretending that this dangerous behavior is as pervasive on the left as it is among right-wingers. To lump everyone into the same bucket of guilt is to ignore the root cause of these despicable acts and fail to demand responsibility from those who perpetrate them. The truth is, it is not liberals who blow up buildings, crash airplanes into them, kill people, threaten violence, step on women's heads, question our president's citizenship, or use bulls-eyes and cross hairs to punctuate their opposition and rile the masses.
Posted by The Ostroy Report at 8:04 AM

Righties are already saying this has nothing to do with their hate speech. Bullshit.

Words have consequences. 24/7 rightie talk radio hate speech domination and Fox News have a huge platform. Yes we have free speech, but the hate they push is immoral. This is how they have operated since Reagan and Lee Attwater. Attwater gave a death bed apology, but Rove & company carry it on.

I don't expect the level of discourse to change. Win at all costs is their motto. Their party is full of sick folks.

Now of course, as we’re seeing with the talking heads and pundits on television (mostly Fox News), radio and in the press, there is an attempt to deflect the reality of what has happened in Tucson by trying to promote the idea that there is equal blame to be shared across the political spectrum for the rhetoric that seems to have brought us to this point. But of course, we all know that is utter and complete nonsense. This shows it pretty clearly http://wp.me/pNmlT-AK