Emanuel Ruling is a Travesty of Justice 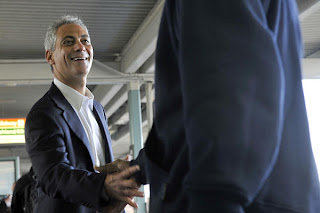 Rahm Emanuel was born in Chicago. He was raised in Chicago. He got married in Chicago. His home is on the North Side of Chicago. His synagogue is in Chicago. He votes in Chicago. He pays taxes in Chicago. He served six years as a U.S. Congressman representing Chicago's 5th District. When two U.S. presidents came calling, Emanuel left Chicago temporarily to serve his country, with Bill Clinton from 1993-1998 and Barack Obama 2009/10. And when he left his most recent post as White House Chief of Staff in October to make a run for Mayor of his beloved city, a Cook County court and the Chicago Board of Elections both ruled that he was indeed a Chicago resident.

But an Illinois Appellate Court on Monday ruled differently and ordered his name be taken off the ballot for the February 22nd election. Illinois state code requires that mayoral candidates reside for at least one full year prior to the election in the city they seek to lead. The court states that the law requires physical presence and claims that Emanuel's White House service requires no special attention. Emanuel's camp is arguing that his "intent" was to always live again in Chicago after his Washington stint was over, and that serving Obama should qualify as national service and be exempted as an exclusion. He's appealing the case in Illinois Supreme Court. When and if the court hears the case is unknown. The clock is ticking for Emanuel. Ballots may be printed as early as today.

The court's ruling is not rooted in anything partisan. The judges who made the decision ran as Democrats. No, it's not about politics. It's about stupidity. Their decision is just plain wrong and un-American.

This is a very serious issue not just for Chicagoans who, according to the latest polls, overwhelming support Emanuel's candidacy, but for the entire country. How is it possible that someone as patriotic as Emanuel, who selflessly heeded the call of duty, who faithfully and tirelessly served his country and two presidents, is punished for his service?

To be sure, Emanuel knew the rules, and that there'd be possible questions as to his residency. He knew going to Washington was a risk to his future political aspirations in his hometown. But he went anyway. Should he have said no to Obama? "Sorry Barack, old buddy, but I want to be Mayor someday and this could really screw things up for me!" He didn't do that. He took the job. He served his country. And now the Appellate Court says "thanks" by holding up his candidacy on a completely irresponsible and irrational technicality, and one that may not even be legal.

What does this say to others who are asked to leave the comfort, security and spoils of hometown politics to serve their country and president? How does this ruling help bring brilliant, highly ambitious, dedicated, patriotic citizens to serve D.C. in the future? It doesn't. And that's a damn shame.
Posted by The Ostroy Report at 7:20 AM

Doesn't this mean every senator living in DC suburbs is no longer a resident?

No. Chicago has it's own law requiring eligibility to run for Mayor. It says that a candidate must "reside" within the City. Not own a house. Not intend to reside there after he's done residing somewhere else. There is no subjective element to the question of whether you reside in a place or you don't.