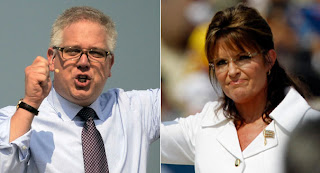 Kudos to MSNBC's Joe Scarborough. On Tuesday's "Morning Joe" broadcast, the co-host pulled no punches in pointing a finger at conservatives in both politics and the media over the toxic rhetoric that many believe to be partly responsible for Saturday's tragic shooting at a Tuscon, AZ Walgreen's parking lot. The deadly rampage took the lives of six innocent victims, including a 9-year-old girl, and critically wounded Rep. Gabrielle Giffords and thirteen others.

Scarborough, who especially criticized Fox's Glenn Beck for his relentless incendiary attacks on Obama, said "conservatives do themselves a disservice if they don't look in the mirror" regarding the increasing vitriol coming from the right." He added that "conservatives need to call out, yes, Sarah Palin for putting gun sights" on target lists on her website and that they "need to call out Michelle Bachmann for telling Minnesotans to be armed and dangerous."

When he was asked why he's not condemning liberals for allegedly making the same type of inflammatory statements, Scarborough said "I'm conservative...I'm a Republican...I am responsible for holding my side accountable." Unlike Sean Hannity, Mark Levin and other right-wing rabble-rousers in the media whose ratings seem inextricably tied to the level of toxic rhetoric they spew, and who've spent the last 24 hours aggressively defending Palin, Bachmann, Beck etc, Scarborough understands the impact of this relentless hate-speak and the need for it to stop. It's nice to have an adult in the room.
Posted by The Ostroy Report at 8:02 AM

At this time and space, Scarborough is through as being accepted as a repub. Until the grownups take back his party, he will not be accepted anymore. The repubs sold their souls all for votes going back years now. They are only the old white people party now.

What is most disturbing is the hypocrisy of the Tea Party and people like Palin. They choose to set an aggressive, dangerous tone when characterizing or talking about those they oppose, (i.e. neuter liberals, save a seal & club a liberal, Don't retreat-reload, We came unarmed - this time, etc.), but when they're the target of aggressive and ugly speech in response to the tone they set, they become defensive and see themselves as victims! This article and video shows the hypocrisy in clear detail - http://wp.me/pNmlT-AK