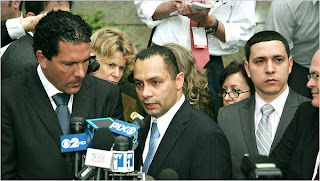 Two New York City police officers, Franklin Mata and Kenneth Moreno, were acquitted last week of rape charges brought on by a woman in 2009 who claimed they abused her while on patrol and she was highly intoxicated. The high profile case dominated the news for months. The officers were convicted of three counts of official misconduct for entering the woman's apartment. They were immediately fired by the Police Department and face up to a year in jail on each count when sentenced June 28th.

Afterwards, Moreno stood on the courtroom steps and said the woman, who's suing both cops and the city for $57 million, was "mistaken and confused," and that "she made the whole thing up." And over the weekend Moreno's wife Julia, in a colossal state of denial, expressed outrage at the accuser as well, saying she "should go to jail for this" and should "go to hell....From the beginning of time, this is what girls do -- young girls, inexperienced. They're not mature. They get drunk. They do these things and, you know, they want sympathy. In his case I believe she wanted sympathy from her friends because they threw her out of her own party."

Moreno's wife is obviously standing by her man regardless of how obvious his guilt. But she's angry at the wrong person. It was her husband who admittedly picked up the very drunk woman, took her to her apartment and then over the course of several hours re-entered her apartment three times, using her keys. He "flirted" with her, "snuggled" beside her in bed while she wore only a bra, kissed her head, and sang to her. What's more, there is a recording of a fake 911 call they made to justify returning to the apartment, and, the victim had later confronted Moreno outside his precinct while wearing a recording device. After insisting that nothing had happened, he then admitted that they "had sex" and that he had used a condom. And Ms. Moreno's angry at the victim? (By the way, she started dating Moreno when she was 18 and he was 33. I'll let you draw your own conclusions on that one...)

At the core of the defense was its claim that she was too drunk to be a credible witness, but it is precisely that state of debilitating intoxication that served as the very invitation for the officers to make their highly inappropriate and illegal entry into her apartment where she was supposedly just 'comforted' as opposed to raped. Furthermore, there was no DNA. But if she showered, or if he used a condom, that could explain the lack of physical evidence.

Moreno claimed that, as a recovering alcoholic, he was merely "counseling" her about her drinking. Did you ever watch MSNBC's "Predator" series? It investigates sexual predators as they find their underage victims (as young as 12) in online chat rooms and then travel--often driving for several hours--to meet them. Inevitably, once host Chris Hanson's sting operation nails them, they claim to be there to "mentor" these poor, vulnerable underage teens. It's crazy to think these guys want sex with children just because they engage in very graphic online chats and then show up at the door with alcohol, drugs and condoms, right?. Why is it that the bad guys are always "just there to talk?"

Are we as an intelligent society really expected to believe that Moreno simply lay aside her in her bed, innocently caressing her as he sang Bon Jovi's "Living on a Prayer" gently in her ear? It's pretty safe and fair to assume that the officers' behavior was anything but altruistic given the highly unethical nature of their presence in the her apartment in the first place. And given this suspicious backdrop, it's easy to accept the accuser's account as the truth. Don't tell me a red-blooded adult male who makes repeated trips into a drunken young woman's apartment does this with the sole intent of taking care of her. If that were the case, and she was so sick that she required professional attention, he could've and should've called paramedics to the scene or driven her straight to a hospital. I'm sorry, but Moreno wasn't there to nurse or croon. It's very unfortunate that there was no physical evidence to conclusively prove what happened.

The verdict just reinforces the ugly truth about what women will face if they accuse a man of sexual assault, especially if they're drunk and the man is a cop and he'll conveniently claim that she was too wasted to remember anything or to be taken seriously.
Posted by The Ostroy Report at 7:44 AM

agree with you that they are guilty as sin. however no physcial evidence, as you stated, the vicitm made a poor witness, cannot recall event..."she thinks she was raped" trust me, a women knows if she is raped or not and cannot convict on "I think, not sure if I was raped.."
at least these two are off the force...hopefully the union doesn't try to get their jobs back