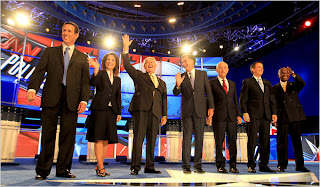 It was a motley cast of characters that would make the 2006 California Gubernatorial hopefuls proud. Monday night's GOP presidential debate in Manchester, NH was also a real snoozer, with more talk of God, gays and Obama than each other. Apparently these folks forgot that before they get to run against Obama they need to battle amongst themselves.

Mitt Romney, the presumptive front-runner, was largely treated with kid gloves. The one time he could've really taken it on the chin was when CNN host John King pressed Minnesota Gov. Tim Pawlenty to address Romney directly over the "ObamneyCare" phrase he coined on Sunday's morning's news programs. "He's right there, ask him about it" King challenged. Pawlenty predictably went into his human Ambien mode and avoided appearing too negative.

Pawlenty also repeatedly touted his blue-collar, union roots. I love when Republicans boast of their blue-collar roots as proof that they'd know how to screw the little guy better than anyone.

Newt Gingrich, whose candidacy recently imploded like a Sicilian volcano, was the angriest, most-defiant and most defensive. He disingenuously described Obama's economy as a "depression" on multiple occasions, and skirted the fact that virtually his entire senior strategy team deserted him last week. Talk about depression. And Gingrich also back-peddled yet again about his comments over Rep. Paul Ryan's MediScare plan. Yet he basically repeated his words of caution--first offered on NBC's "Meet the Press" a few weeks ago--that his party not overreach on health care:

"If you’re dealing with something as big as Medicare and can’t have a conversation with the country where the country thinks what you’re doing is the right thing, you better slow down."

While Michelle Bachmann didn't get into any trouble by inaccurately discussing American history, I must say that she comes off as rather scholarly and substantive when compared to her Tea Party co-Queen Sarah Palin. Although there were a couple of instances where someone really needed to give the Minnesota Congresswoman a civics lesson. Speaking to an audience member she vowed, if elected, to immediately repeal ObamaCare, apparently unaware that it is only Congress, not the president, who has the power to enact such legislation. And on the subject of repealing Don't Ask Don't Tell, Bachmann promised that she'd confer with "our commanders in chief" in the military to hear their opinions.

On the subject of gay marriage, all candidates except Cain and Paul hypocritically said they'd support a Constitutional amendment outlawing it despite all firmly believing in states' rights. I guess when it comes to gays, government knows best.

Probably the most bizarre moment of the debate occurred when former Godfather's Pizza CEO Herman Cain, the only black candidate in the race (and apparently the only black person in New Hampshire), tried to explain his past comments that "a lot of Muslims are not totally dedicated to this country" and that he'd refuse to appoint a Muslim to his cabinet without first conducting a loyalty Litmus test based on dedication to the U.S. Constitution. Cain was visibly uncomfortable in his response, lamely explaining that "because you have peaceful Muslims and then you have militant Muslims, those that are trying to kill us." He added, "I was thinking about the ones that are trying to kill us, number one." Like he would really be appointing someone to his cabinet who might actually be a Muslim terrorist?

Cain's ludicrous supposition gave Romney an opportunity to toss some sanity into the conversation. "Obviously I would only be appointing someone to my cabinet who I knew and was comfortable with."

"Of course, we're not going to have Sharia law applied in U.S. courts. That's never going to happen. We have a Constitution and we follow the law."

Little could be said about the other candidates on stage--Rick Santorum and Ron Paul--who provided voters a further glimpse into their Christian fundamentalist and Libertarian views respectively. Neither has any more of a chance of winning the nomination than I do.

As far as picking a winner, Romney was the only candidate to appear presidential. He was intelligent, rational and highly confident and composed. The only adult in the room. Did he shamefully run from his own RomneyCare program while governor of Massachusetts? Absolutely. But that was expected. It's his albatross, and he needs to distance himself from his own policy, which is essentially the same health care program Obama pushed through Congress. But just as Romney injected some levity into the evening by announcing that the Boston Bruins were up by four goals in the Stanley Cup Hockey game, I suspect come the GOP convention he'll lead the pack by at least that many delegates....assuming that pack stays the same and doesn't include any of the party's rock stars like New Jersey Gov. Chris Christie.
Posted by The Ostroy Report at 7:19 AM

Christies' polling has fallen off the cliff, and wounldn't beat Obama...

...far from being a rock star, this one-hit-wonder (more tax cut for the rich) and the rest of his genre are singing a passe tune that voters don't want playlisted anymore.

It goes "Even the preacher who works for Jesus; the Archbishop who's a peaceful man..." As oposed to all those archbishops who dwelled in "Openheimer's deadly toy?"

Dear Diary, Today I referened both Eddy Grant and Sting while talking about the Republican presidential hopefuls...