What Advice Would Rangel Give Weiner? 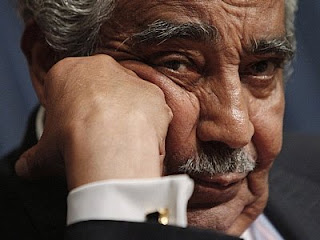 Given embattled Congressman Anthony Weiner's Custer-like stand on Capitol Hill, I wonder if the randy Representative's refusal to resign might be inspired by the plight of his fellow Congressman from New York, Charlie Rangel, who dug his own scandal-plagued heels into the ground and went on to win re-election in 2010:

Rangel: Weiner, I feel for ya, brother. I know what it feels like to have your world come crashing down on you so unjustly after dedicating your life as a public servant. It's just so wrong.

Rangel: You know I love ya, but I think you lost control the first time you sent pictures of your johnson over the Internet. But that's something different. Something for you and your shrink to work out. I wanna talk business. Politics. And nobody knows more about NY politics than I do.

Weiner: Get to the point Charlie. In case you haven't noticed, I got a lot on my plate right now. Plus, I gotta head to Best Buy to get a new digital camera...so I'm in a bit of a hurry.

Rangel: Ok, here's the thing. Guys like you and me...we're warriors. We fight to make America a better place. So, we're entitled to a few little treats now and then, right? The public even wants us to have that stuff. Except you and I do it in different ways. I like to amass lots of real estate, skip taxes, park my car for free, and take Caribbean trips. You like to act like a horny 16-year-old on Twitter. Jeez, man, I gotta say as an aside, you didn't even get laid in this mess! All this hullaboo and no booty?! You're pathetic! If I'm gonna possibly lose my job over a sex scandal it's because I'm bangin' Halle Berry!

Weiner: Charlie, please, get to the point, I have to also get over to the Jewelry Exchange to get Huma one of those big ass honkin' Kobe Bryant-style 'I'm sorry' diamond rings.

Rangel: Listen, people said I had to step down. That I was finished. And I said, 'screw that...I ain't goin' nowhere!' And I showed 'em. Won the primary and kicked my Republican opponent's ass with 80% of the vote. And you can do the same, Weeny. I got the blacks, you have the Jews, Italians, Irish and all those Asian, Pakistani, Indian immigrants and such. They love you..just like the blacks love me. You think these folks, these hard working middle class New Yorkers, give a rat's tucchus whether I have a house in the Dominican Republic or whether you Tweet dick shots? They care about their schools, their health care, protecting their self-interests...which is what they know we do for them. You stay in that seat, Weiner, and you refuse to be bullied by Pelosi, Reid, the media or anyone else, and you hang onto your job. I can tell you first hand...it's the voters who will decide your fate. And besides, no one in DC liked you before, so whattya got to lose by staying? It's not like you're gonna lose any friends, ya know! Just stick it out...stay the course. Don't get rattled, no matter how ugly it seems. I'm living proof of that...

Weiner: Ok, thanks Charlie. You're my only friend.

Rangel: Um, not really. Don't really like ya. Never did. Shit, no one does, man! You're an asshole! But I do love underdogs.....
Posted by The Ostroy Report at 7:14 AM

LOL "I have to also get over to the Jewelry Exchange to get Huma one of those big ass honkin' Kobe Bryant-style 'I'm sorry' diamond rings." Nice!