Why Blooberg's Taxi Proposal is Unfair 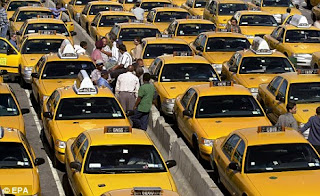 Mayor Michael Bloomberg is attempting to get a bill pushed through Albany, bypassing the City Council, that would in effect allow New York City's livery cabs to legally pick up passengers in certain areas of the city. This type of proposal has come up at other times over the last forty years and was always killed. As it deserves to be again now.

My father was a "hack" for over 50 years. He began in a post-war era when many young Jewish men like himself could make a decent buck behind the wheel if being behind a desk didn't appeal to them. It was an era where you could eke out a living, perhaps buy a starter home, and in some way live the American dream.

There's a certain misguided nomadic glamour that's associated with the job. You're out on the road, your own boss, making your own hours, working if and when you want to, and meeting all sorts of interesting people. You're like jack Karouac with a coin changer, right?

Wrong. Driving a taxi is an utterly miserable way to make a living and don't let anyone tell you differently. The job practically killed my dad. I remember the long, 15 hour days. I remember the robberies at gunpoint. All the accidents and tickets. And the literally backbreaking nature of being sedentary for so long each day. I still have in my head the disturbing image of my dad exiting his cab as I sat eating dinner by the window one night, watching his grossly contorted body clinging to the fence as he made his way toward our building, hunched over so far he looked like he was staring at the ground. He and his brethren were, and remain, some of the least appreciated workers in New York. He was often cursed at, spit at, threatened, tip-stiffed and generally disrespected.

In 2011, gone are the local, home grown Jewish, Irish and Italian drivers. Most of the more than 46,000 cabbies are immigrants from countries such as Pakistan, India and China. The economics of the job are nearly impossible to get around. Medallions, of which there are about 13,200, cost upwards of $700,000 and mostly it's the wealthier investors who can afford them. The average driver leases his medallion for as much as $200 per day from these fleet-operating barons, and whatever they make beyond that, after paying for gas, food, and other expenses, is theirs to keep. It's an untenable situation, which is why these poor guys literally just sleep and work, some even seven days a week. There's no job security, no benefits, no safety and definitely no glory. But it's an honest living.

Bloomberg's measure is flat out wrong. It will impact the value of medallions and allow for unfair competition. Sure, there are problems with the taxi system. Ever try hailing a cab between 4pm-5pm? Maybe it'd make more sense to require taxi fleets to change shifts at 8pm and not right smack in the middle of rush hour. But permitting gypsy cabbies to reap the legal and economic benefits of medallion drivers without having to pay into the system the same way is grossly inequitable and not the answer.
Posted by The Ostroy Report at 7:37 AM