"I'm Paul Revere, and You Know Nothing of My Work!" 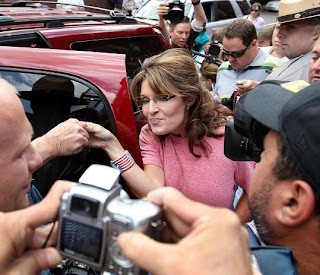 There's a brilliant scene in Woody Allen's Annie Hall where Allen and girlfriend Diane Keaton are standing in line at a movie theater in front of an arrogant, pompous know-it-all whose misinformed pontifications about the writer Marshall McLuhan's work are driving Allen crazy. He admonishes the blowhard and tells him he doesn't know anything about McLuhan:

Man: "Oh, really? Well, it just so happens I teach a class at Columbia called "TV, Media and Culture." So I think my insights into Mr. McLuhan, well, have a great deal of validity!
Alvy Singer (Allen): Oh, do ya? Well, that's funny, because I happen to have Mr. McLuhan right here, so, so, yeah, just let me...
[pulls McLuhan out from behind a nearby poster]
Alvy Singer: come over here for a second... tell him!
Marshall McLuhan: I heard what you were saying! You know nothing of my work! You mean my whole fallacy is wrong. How you got to teach a course in anything is totally amazing!
Alvy Singer: Boy, if life were only like this!

Well, if only we could present Paul Revere to Tea Party queen Sarah Palin he'd surely echo McLuhan in telling her she knows nothing of his work. And, he'd probably be standing with the Statue of Liberty because she apparently knows nothing about either of them, or of most of our nation's history for that matter.

Up in Boston last Thursday The Wasilla Wonder was asked about Paul Revere’s famed ride and she said he "warned the British that they weren’t going to be taking away our arms. By ringing those bells and making sure as he’s riding his horse through town to send those warning shots and bells that we were going to be secure and we were going to be free."

Palin's blunder, captured on video, quickly swept through the Internet. Taking a break from her "There's-No-Way-I'm Running-For-President-But-I'm-REALLY-Digging-All-This-Attention" bus tour, she appeared on Fox News Sunday and was asked by host Chris Wallace, "You realized that you messed up about Paul Revere, don’t you?" And as only Sarah Palin could do, given her outsized ego and intellectual denial, she replied in her defense:

As my grandmother used to say, oy vey! Too bad the Fox-friendly Wallace let her off the hook too easily and didn't press her on the facts. Had she been on a real network, not the GOP Softball Channel, she would've earned the public embarrassment and humiliation she so rightly deserved.

Will someone please get this poor woman a history book?! Just a week earlier she gave a convoluted explanation of the Statue of Liberty's origin and significance. I'm not sure who's more ignorant of American history, Palin or her Tea Party nemesis Rep. Michelle Bachmann, who a few months ago claimed the "Shot heard round the world" was in New Hampshire, not Massachusetts. What is with these Tea Baggers? Is being dumb a requirement?

To set the record straight for Grizzly Mama, here's what PaulRevereHouse.org has to say about the historic ride: "On the evening of April 18, 1775, Paul Revere was sent... to ride to Lexington, Massachusetts, to warn Samuel Adams and John Hancock that British troops were marching to arrest them... On the way to Lexington, Revere "alarmed" the country-side, stopping at each house, and arrived in Lexington about midnight. As he approached the house where Adams and Hancock were staying, a sentry asked that he not make so much noise. "Noise!" cried Revere, "You'll have noise enough before long. The regulars are coming out!" After delivering his message, Revere was joined by a second rider, William Dawes, who had been sent on the same errand by a different route. Deciding on their own to continue on to Concord, Massachusetts, where weapons and supplies were hidden, Revere and Dawes were joined by a third rider, Dr. Samuel Prescott. Soon after, all three were arrested by a British patrol."

So what's next for Palin as she glides her giant PalinMobile-of-Truthiness across America? Perhaps she's preparing for her next speech entitled The Gettysburg Address: Gen. Robert E. Lee's Finest Virginia Speech.
Posted by The Ostroy Report at 8:14 AM

I'm surprised you are mocking her. It's not as if she said she was going to visit all 57 states....

Anything Palin says or does deserves any attention from anyone because of why?

Because of people like Russ Feingold, Dennis Kucinich and Bernie Sanders. They are the true dangers to Amerika.

kevinschmidt said...
This comment has been removed by the author.
2:46 PM

All this "hoop-la" over Paul Revere. Granted, Palin is so stupid she couldn't pour water out of a rubber boot with the instructions on the heel, but Paul Revere only rode 19 miles. Isreal Bissel did the serious riding/warning. If it wasn't for H.W. Longfellow and that poem of his, we would have never heard of Paul Revere. And yes, I believe it IS a requirement to be willfully ignorant and ego-centric to be a Teabagger. Why would you be otherwise?

enough about palin, she is empty headed.

any comments on weiner or do you live with blinders on.

better yet, any commnets on jobs, economy, getting out of Iraq...Afghanistan...I mean the real issues