Time for a New Kind of Gay Pride Celebration? 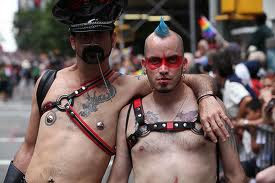 In the forty or so years since the initial Gay Pride parade in Manhattan, the event has mainly become associated with raunch: public, often times drunken displays of nudity, kink and camp so high you'd need a satellite to photograph it. And that's the problem. At this annual parade and others in Los Angeles, San Francisco and elsewhere, gay "pride" has been co-opted by the wild and crazy and has become synonymous with promiscuity and debauchery.

Maybe I'm just an old fart, but virtually every gay person I know leads the same sort of life I do: hard work, family, kids, good times. No one I know who's gay took to the streets this past weekend. They took their kids to parks, saw movies, ate at restaurants, sat around pools, BBQ'd and/or got together with close friends to celebrate. And I don't think any of them condone the kind of Sodom and Gomorrah-like revelry that fills our nation's streets each June.

I'm not gay, so I don't know what that sort of "pride" feels like and perhaps therefore don't understand the need to let loose like Rip Taylor and Grace Jones on Ecstasy. But I'm just not so sure that a large segment of the homosexual population wants their pride symbolized this way either. They don't share in that form of celebration, and many have told me they feel as alien from this annual event as I do.

Maybe it's time for a new kind of gay pride celebration...one where gay and lesbian couples could feel safe, comfortable and honored to attend with their small children. As the nation increasingly moves toward accepting homosexuals into the mainstream, maybe a more mainstream celebration would be more fitting as well.
Posted by The Ostroy Report at 8:35 PM

I couldn't agree with you more, Andy. I felt like a prisoner in my apt on Sunday. What used to be a joyous day has now turned into an event to run away from!

Originally this celebration was a protest march. It is my opinion that the evolution tended more and more towards the extreme as the right wing accused Gays of exactly the kind of things we see today. I attended many of the earliest marches and don't approve of what this has become but I understand why so many feel like giving the bigots a symbolic finger by portraying themselves as exactly what the right wing thinks they are.