Don't Believe Paul Ryan and Mitch McConnell: They're NOT With Trump 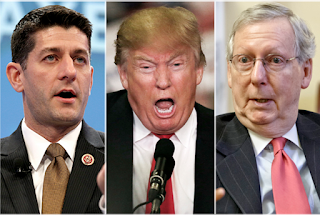 If Tuesday’s election results are an indication, Republicans are in a state of dire panic. The GOP was dealt a crushing blow across urban and suburban landscapes in an ominous foreshadowing of much worse things to come. Its leadership is now faced with the terrifying reality that they can’t win with Donald Trump and they can’t with without him.

But this diarrhea-inducing fear hasn’t stopped the party from pretending that it’s unified in support of the president.

“We have the same agenda.”

Sorry Mitch, but you don’t.

Trump only gives a shit about himself and his business. McConnell and Ryan want to further the Republican agenda. They want tax reform. They want it so badly that for the last two years they’ve sold their souls and slept with the devil. They’ve tolerated Trump’s ignorant, erratic, irrational antics; his unprecedented assault on truth and reality; and enabled his divisive, destructive, unconstitutional, sexist, racist treasonous behavior because of their Viagra-worthy hard-on for lower corporate taxes and an estate tax repeal.

But make no mistake. Nobody hates Trump more than these two self-serving snakes, both of whom have been the target of his ridicule and bullying. Don’t for a second be fooled by their public comments. They’ve concluded that, regardless of GOP control over Washington, they will get nothing done, absolutely nothing, as long as the Manbaby-in-Chief occupies the Oval Office. They are fucked, period. And they know it.

They know that every day, instead of spewing disingenuous talking points about tax reform, healthcare and infrastructure they’ll instead continue to face a barrage of questions about Trump and his leadership:

“Do you support what the president Tweeted this morning?”

“Are you upset that the presidential threw you under the bus today?”

“Do you believe Donald Trump is emotionally fit for the job?”

But it will. One day. And that day is getting ever closer. To be sure, McConnell and Ryan still fear the base. The 33% who still seem to support Trump no matter what he does, says or how much he breaks the promises he’s made to them. They believe they need this unfathomably loyal (or ignorant/naive) group. But the base is not a monolith. It’s already beginning to splinter, as a Wall Street Journal/NBC News poll this week indicated.

McConnell and Ryan are self-preservationists, like virtually all politicians. They will not rock the Trump boat. With regard to impeachment or the 25th Amendment, they will not lead. But the nanosecond they sniff a safe opening, a nascent bandwagon, they will hop on full-throttle. It’ll happen when they begin to feel that the moment has arrived when it’s truly him or them. And then it’s Trump who’s fucked. The “I alone” president will be facing an existential tsunami the likes of which even Richard Nixon didn’t experience at the peak of Watergate. For him, Washington will become a cold, isolated minefield. Even his family will be torn apart by scandal and public scorn.

Special prosecutor Robert Mueller will eventually conclude his investigation and hand McConnell and Ryan evidence that Trump and his team colluded with Russia and then obstructed justice to cover it up. That’s when they’ll make Trump the ‘deal’ of his life:

“Mr. President, this evidence is damning beyond comprehension or doubt. We are forced to immediately draft articles of impeachment. We will seek to remove you from office as quickly as possible. And, Mueller has advised that he intends to bring an indictment against you as soon as you leave office. Indictments for certain family members are already being drafted. You can avoid this public humiliation, and prosecution, by resigning immediately. For the sake of the nation and the American people, we strongly urge you to do so and begin to rebuild your life away from Washington.”
Posted by The Ostroy Report at 11:23 AM