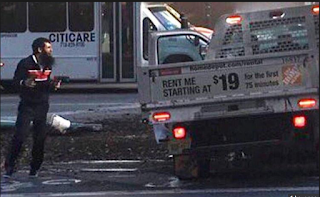 Yesterday afternoon my daughter Sophie walked out of school and came within 20 feet of a crazed terrorist as he exited his death truck and stood brandishing what appeared to be two guns. She quickly turned back, grabbed a few friends and yelled “go, go, go,” then hurried back into the building. Moments later the school was on lockdown.

I received a cryptic text from her on a borrowed phone:

Hi dad, my phone died but there was an incident outside school. I’m in the school. I’m ok. Just know I’m ok. I love you.

It was every parents’ worst nightmare. It’s the not-knowing which grabs you by the throat the most and refuses to let go.

I was able to reach her back and then speak to a teacher who said “there was an accident, and some weapons, the building is on lockdown, the kids are inside and safe, but don’t come because they won’t let you near here.” The notion of sitting home watching it all unfold on CNN seemed preposterous. My daughter was in that building. And that’s where I was going to be.

I hopped on a Citibike and sped like a racer. As I turned off Greenwich Street and onto Chambers Street I immediately saw the legion of police cars, ambulances and media trucks surrounding her school. Lights, sirens. It looked like a war zone. The not-knowing. Thinking the worst.

I felt that same overpowering nausea in the pit of my stomach that I felt 11 years ago today as I drove to my late wife Adrienne’s office just before I found her murdered.

I sped down Chambers. Crying on a Citibike. My mind racing as well, back to that horrible day 11 years ago. And also to that other horrible day, when my neighborhood, when our city and nation, was attacked by terrorists. It all came crashing back down. And once again, fearing the worst. The not-knowing.

Parents had gathered in front of the school. The panic and fear on their faces was evident. We weren’t given any information. We just wanted to see our kids. Soon after we were moved up the block, away from the front entrance, and behind police tape. A burly detective briskly walked up the block to us, a bit agitated. He shouted that we needed to move even further back, and that he was concerned about “devices.”

From afar I saw a parent enter the school. I told the detective I wanted to go inside as well. That if he let some parents in he has to let us all in. To my surprise he said ok, abruptly instructing a uniformed officer to usher us in as long as we could identify ourselves as parents.

Within 10 minutes I walked into the school’s gym. Sophie spotted me and ran into my arms. She was scared, crying and hugged me for dear life. I’ll forever remember the look on her anguished teenage face. I held her in my arms and cried again with her. I was so happy and relieved, then sad, and then angry. Angry that these poor kids had to experience this horror. That my kid would have the image burned into her head of the crash, the screams, and this monster pointing weapons in her direction. Angry that she once again had her innocence kicked in the gut.

And then she started telling me what happened. And I became proud. Proud of how she reacted when faced with unimaginable horror. She stayed calm. She helped others. And despite me feeling like she ignores the shit out of me when I try to instill in her a few survival tactics, it was clear she had listened to me. She remembered what I told her, and she kept my voice with her. I wasn’t there with her physically in her time of need, but I definitely feel comfort in knowing I was at least in her head.

And now I was huddled with her in a school gym, on Halloween, not knowing what the hell was happening or when we’d be allowed to leave.

Since 2006, Halloween has never been the same. That day Adrienne and I threw a party for Sophie’ s nursery school classmates and their parents. It was a great party. But a cruel, deceiving calm before the storm. Then the storm came. Halloween now serves as a table-setter for the worst fucking day my family and Adrienne’s family has ever known.

Eight people died yesterday. Just because they decided to take a bike ride. A ride in the wrong place at the wrong time. My heart aches for them and their families. I know their pain firsthand. I’m also thinking about how differently that moment could’ve been when Sophie was standing on that corner, seeing the above image through her terrified 13-year-old eyes. If there could possibly be a silver lining in this unfathomable tragedy, it’s that while 11 years ago today Adrienne died, yesterday my Sophie lived. That this November 1st I feel lucky and grateful.
Posted by The Ostroy Report at 11:19 AM