The Bully in the Pulpit 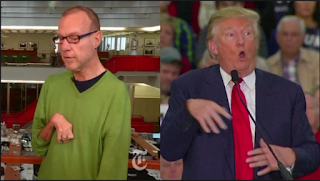 It is common to cite the power of the United States presidency in terms of using its valuable bully pulpit to share a vision and push an agenda. In the case of Donald Trump it’s much more literal. There is an actual bully in the pulpit. And he’s completely squandered the political currency and power that typically comes with this prestigious office. Instead, the Bully-in-Chief has sent his administration and his party swirling in an out-of-control vortex of chaos and failure.

The Bully was on display again this week at a ceremony in the Oval Office honoring Navajo veterans of World War II where he uttered a racist slur once again to attack his progressive nemesis Sen. Elizabeth Warren.

“You were here long before any of us were here,” The Bully said to three uniformed vets. “Although we have a representative in Congress who, they say, was here a long time ago. They call her Pocahontas.”

First of all, the statement doesn’t even make sense. That Warren was here “a long time ago” is a total Trumpian incoherent non-sequitur. Next, who’s this “they” he was referring to? No one calls Warren “Pochahontas” except The Bully.

Lastly, and most significant, can The Bully have been any more insensitive and tone-deaf in using this slur at... a fucking ceremony honoring Native Americans?! Especially while standing in front of a portrait of Andrew Jackson, the nation’s seventh president? Perhaps someone on The Bully’s history-bankrupt, swamp-dwelling staff should’ve reminded him that it was Jackson who signed the Indian Removal Act of 1830, through which 20-million acres of Indian territory was stolen and upwards of 25,000 died while en route West after being displaced and relocated.

The remark was quickly condemned by Native American leaders.

“For Indian Country, which has a very high level of participation in the military and veterans’ service, it was a real honor to be at that event today,” said Jacqueline Pata, the executive director of the National Congress of American Indians, “and it is unfortunate that it was used as an opportunity to once again try to use the word Pocahontas in a negative way towards a political adversary.”

But that didn’t stop The Bully’s press secretary, Sarah Huckabee Sanders, from denying that his comment was a racial slur...instead attempting to re-direct the focus onto what she claimed is the real issue.

“What most people find offensive is Senator Warren lying about her heritage to advance her career.” A bit ironic that she works for someone who’s pathologically lied his way into the the most powerful job on the planet.

To be sure, The Bully’s wrath is felt way beyond the reservation. He bullies women, gays, beauty pageant winners, blacks, Mexicans, Hispanics, Muslims, immigrants, Gold Star mothers and wives, the disabled, his opponents, Hillary Clinton, Meryl Streep, the cast of Hamilton, NFL players, UCLA basketball players and their fathers, the media, judges, the intelligence community, foreign mayors, our allies and his own staff/cabinet to name a few.

The only people he doesn’t bully? Our enemies, especially his puppet master Vladimir Putin. Neo-Nazis and white supremacists, whom he instead normalizes and empowers. And accused child-molesters such as Roy Moore, who he endorses for the U.S. Senate.

But as many psychologists believe, The Bully’s misguided appeal and popularity—and reign of terror— will likely be very short-lived and, according to current polling and overall dissatisfaction even among The Bully’s base, his days appear numbered...