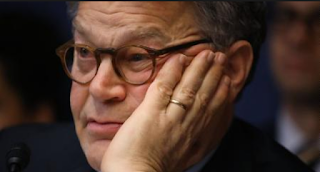 In the wake of all the sexual harassment and abuse scandals of the past couple of months it’s become popular opinion that we’ve finally reached a ‘tipping point.’ That we’re experiencing a transcendent moment in our culture when women can finally feel safe coming forward with their allegations of assault. But I’m not so sure.

A strange but not entirely surprising phenomenon is occurring involving the accusations against the Democratic Senator from Minnesota, Al Franken. I am astounded at the level of blind partisanship coming from some on the left—in particular, women—in defense of Franken. They’re engaging in “slut-shaming” his initial accuser, radio personality Leanne Tweedon, while also discrediting his latest alleged victim, Lindsay Menz, a 33-year-old Texan who claims she was groped by Franken in 2010.

The hypocrisy is stunning. These same people who condemn Republicans for choosing party over morality are minimizing, or worse, denying, Franken’s alleged behavior because he’s their progressive hero and need him in the Senate. This suggests that sexual harassment is ok, and the accusers are liars (part of a vast right-wing conspiracy), when it’s ‘our guy.’

Even more astounding is when this shameless partisan shilling comes despite an admission of some guilt and shame, coupled with an apology, from the accused, as in Franken’s case.

“God dammit, another one? And didn't his last accuser get found out about groping people herself?”

“The farce continues. makes a mockery of real abuse victims.”

A woman on Facebook even went so far as to say “what’s happening now is starting to seem like a witch hunt.”

Another said "he's been railroaded."


And yet another claims the pic of Menz with Franken is “a hack job....I enlarged it and saw that it was Photoshopped to put their heads closer together.”

Others cling to the perception that Franken “only did this once.” (this was prior to the latest allegation).

And the question that is most infuriating is, “Do you really think what Franken did is as bad as what Donald Trump and Roy Moore did?

Who “Tweedon groped,” or what she wears, what she does for a living or how overtly sexual she is has nothing, I repeat, nothing, to do with whether or not Franken harassed or assaulted her. Let’s take this to an extreme: prostitutes and porn stars screw for a living. By this convoluted logic, do they therefore have less of a right than a librarian to claim they were raped? Should we discredit them because of the work they do? Doesn’t that perpetuate the “they were asking for it” mentality while also empowering men to abuse them more because no one will believe these “sluts?”

How the hell does anyone know whether Menz is any less a “real” victim? Is she not credible simply because their beloved Al Franken is the accused violator? Can they not fathom how a progressive icon and champion of women’s issues like Franken could perhaps be a sexual predator? Are they spinning off their moral center because none of it this fits their elitist liberal narrative?

Is it only a “witch hunt” the minute someone on ‘our team’ is accused?

And does it really matter whether an abuser committed ‘just one’ crime? Does it make the harassment any less vile and traumatic and worthy of consequence? And, haven’t we learned by now that this type of deviant behavior is never just limited to ‘one’ incident?

Lastly—and please, fellow liberals, I know you’re smart and can comprehend this—not all sexual harassment and abuse is the same. Telling sex jokes in front of women is one form. Being sexually suggestive is another. Then there’s various degrees of unwanted physical contact, and of course rape.

It’s utterly irrelevant whether what Franken’s accused of is “as bad as” as what other alleged abusers including Donald Trump, Roy Moore and Harvey Weinstein have done. When did sexual abuse become a contest? When did it become ok to excuse or justify abhorrent behavior because someone else did something worse? Do we let muggers go because they’re “not as bad as bank robbers?” The nanosecond this thinking enters the conversation the conversation gets muddied.

Bill Maher’s coined a phrase called “Whataboutism.” It’s when the surrogates of an accused politician defend their guy with something like, “well what about what Bill Clinton did?” Apparently they’ve never heard the old adage two wrongs don’t make a right. We’re also now witnessing “Notasbadism.” This is when abusive behavior is mitigated by irrelevant comparisons to other, more severe offenses: ‘Well, it’s not like Franken molested a child, right?!...’

To be sure, we’re still experiencing a tipping point. There’s a palpable shift in the balance of power. More and more women are coming forward, and more and more men are being held accountable for their despicable behavior. But we run a grave risk of undermining this incredible #MeToo movement when we once again fall into a pattern of discrediting and attacking the accusers. It’ll just keep them feeling unsafe in going public.

Tweedon and Menz are part of the solution, not the problem. Their honesty, integrity and character cannot be questioned or impugned. If it is, then we’re right back to where we were before the floodgates opened. We must welcome, accept and protect these victims regardless of party affiliation.

So I suggest to my fellow liberals that they ask themselves the following:

“If it was my daughter who was the victim of insensitive jokes, inappropriate sexual suggestions, or a physical sexual assault (be it an unwanted kiss, grab or worse)...would I (a) care if the abuser was liberal or a conservative, (b) care whether or not anyone else was assaulted in a “worse” way; (c) be more forgiving if it was “the only time” the accuser did this, or (d) want anyone to question her credibility because of something she said, did or wore in the past, or what she does for a living?”

I think we know the answer.
Posted by The Ostroy Report at 8:59 AM