"It's a Lie...It's a Lie!" Obama Finally Comes Out Swinging 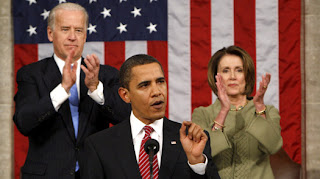 On August 26th I wrote the following:

Obama needs to accept that voters elected him president and gave Democrats congressional majorities to bring about change and not be a bunch of weak-kneed, spineless namby-pambys who still fantasize about bi-partisanship. The president needs to grow some balls and start acting a little Bush-like in pushing through his agenda. It's time to stop singing Kumbaya.

So here's some advice to Obama on how and where he needs to get tough:

1. Health care: stop pussyfooting around while conservatives destroy your reform bill. Get on the tube in a primetime address to the nation and forcefully dispel the myths being perpetrated by disingenuous Republicans. Look straight into the camera and tell Americans that they are being lied to...Get tough, dammit!

And that's exactly what President Obama did in his Wednesday night address to Congress to spell out the details of his health-care reform bill.

"The game is over," he warned his opponents. The speech was brilliantly crafted, forcefully delivered and very specific about the benefits and the costs, while also dispelling the "bogus claims spread by those whose only agenda is to kill reform at any cost."

-On the death panel claim: "It is a lie, plain and simple"
-On providing health care for illegal aliens: lie
-On federal dollars used to fund abortions: lie
-On being forced to change insurance companies: lie
-On reducing medicare benefits: lie
-On increasing the deficit: lie
-On government taking over the entire health-care system: lie

While he gave serious props to Republican Sens. John McCain, Orrin Hatch and Chuck Grassley for their bi-partisan efforts with the late Sen. Ted Kennedy to provide health insurance to children, the disabled and to create a patients' bill of rights, Obama made it very clear that he will not allow the nattering naybobs of negativism on the right to derail health-care reform. "Not this time," he said. He wisely spent much time speaking directly to the American public, in particular independents and seniors (key groups in next year's midterm elections), stood his ground on the 'public option' and assured them he'll deliver on the promise of change on which they elected him.

To be sure, the days and weeks ahead are going to be critical for Obama, as he'll now likely begin a massive private White House campaign to woo moderate and conservative Democrats to support his plan. As for Republicans, who during Obama's speech sat stone-faced, angry and dismissive (i.e. Rep. Eric Cantor (Va) with his head buried in his Blackberry), they've just heard the last note of Kumbaya...


On another note, we could use your help at The The Adrienne Shelly Foundation. We're a 501 c 3 tax-exempt, non-profit organization dedicated in my late wife's honor, and with a simple mission: supporting women filmmakers. Adrienne, who wrote, directed and starred in the hit film WAITRESS, was killed November 1, 2006. Through the Foundation, her commitment to filmmaking lives on. We've established scholarships, grants, finishing funds, screenwriting fellowships and living stipends at NYU's Tisch School of the Arts/Kanbar Institute of Film; Columbia University; American Film Institute; Women in Film; IFP; the Nantucket Film Festival; the Tribeca Film Institute; and the Sundance Institute. Your generous contribution will go a long way towards helping us achieve this very important mission. Please click here to make a donation. Thank you.
Posted by The Ostroy Report at 9:59 PM

He is a snake oil salesman,a used car salesman and David Blaine all in one.We all know hes a terrific orator with a telepromptor.
I will say to you that we need health care reform and also say to you that this plan sucks.Let Pres Obama take the public option and add tort reform to it and go back to the drawing board.He is right that we need competition to send costs down except its not govt health care that will do that.You live in NYC,you should be allowed to shop for insurance in the other 49 states as well.That would lower costs as much as anything!
This is not the right plan.

I did shop for insurance for my 23 year old who is contemplating of moving to a number of states for graduate school. However she has decided that she has to work for a year before applying so we did the shopping around. Guess how much was the average per month for a healthy young lady...in a number of states.
$1200-$1400 with the usual deductibles of course.

Oh, yes, there were some cheaper options. I looked into those closely. The catch was that major hospitals in the area were not accepting them.

Only a public option will have the leverage to compete. Plain free market mechanism to fight the distortionss of the monopoly that other insurance giants have established. Sorry, I meant to say oligopoly.

If you can't understand the moral urgency of the matter and the unsustainable spill over effects of 45 million uninsured and I don't know how many under-insured(guess who is paying for them when they seek treatment in emergency rooms or when they go bankrupt because of medical bills), then I simply have to fight harder to support the President and the bill.

You are one selfish, heartless, igonorant prancing repub!!!

The Repubs want no change and folks like you are blind to reality. All they want to do is destroy a very popular president.

Please do us all a favor and sit down, shut up and let the grownups lead!

I am glad for the outburst calling Obama a liar. It just shows the depths to which Republican hate mongers will go to destroy the President. Like the idiot who just posted remarks calling him a snake oil salesman. Why does anyone even listen to these failed Republicans and their wars, deficits, name calling and self pity?

"He is right that we need competition to send costs down except its not govt health care that will do that.You live in NYC,you should be allowed to shop for insurance in the other 49 states as well.That would lower costs as much as anything!
This is not the right plan."

The insurance sector has had over 5 decades to bring costs down, reduce waste/abuse, and bring affordable coverage to everyone without denying people for pre-existing conditions. They failed.

This debate reminds me heavily of a saying I once read: "Unchecked capitalism is unchecked greed."

Obama may well finally be throwing punches, but they still seemed to be aimed at the Democrats and not at the Republicans. His blatant kissing up to the GOP while simultaneously threatening the liberal Dems during his address was the last straw for me, and I ceased listening to him. I await the latest major disappointment to make itself known as the various bills get merged into their final corporate-friendly form which he will gladly sign.

These Republicans act like Obama was appointed President. It was a landslide victory and its time to bury the Republican Party because they only care about the top %10. There was a chance I would vote for a Republican but not anymore. I hope Obama rams it down corporate Americas throat.

Actually, Pres. Obama, himself, mentioned the possibility of a voluntary, non-determinative panel that would be needed to help families with end of life issues.

He used the example of his own grandmother who was given expensive hip replacement surgery as comfort measure, when she was terminally ill.

The president mentioned that terminal and chronic illness accounts for 80% of all health care expenditures and would be something that would have to be addressed in the future.

It is NOT a lie to make conjectures that in bringing a huge number of people into a govt financed system, such rationing WILL be on the minds of politicians who do not wish a dramatic raise in taxes.

Here's the NYT piece where the president made the statements I summarized.

Read it yourselves. It's on page 4 or 5 depending on your browser.

If this brouhaha were about the institution of a school voucher program there would be no difficulty within this same circle of people, with understanding how conjecture and extrapolation play a role in the national discussion on ANY public policy.

Despite ANY assurances to the contrary, written within the wording of a hypothetical school voucher policy, would ANYONE here feel it was a "lie" or a "scare tactic" to suggest that this legislation was ultimately intended to end the public school system?

On the contrary, THAT conjecture would be the battle cry of those who opposed the policy and rightly so, in the sense that such conjectures are the natural progression of any discussion.

Does anyone TRULY think that we can expand Medicare by millions of citizens and NOT have decisions on treatment made based upon some sort of cost-effiacy analysis? Especially as regards the motives of politicians to keep taxes down?

If you do you're kidding yourself.

As the link indicates above, as recently as March, the president was saying that there would have to be a discussion about it.

Go on and kid YOURSELF. However, other people DO discuss this issue and look at what they feel will be long term effects and what they consider to be the ultimate goals-motives. Again, as Democrats would with hypothetical school voucher policy, or...say...a bill to restrict abortion based upon trimester.

In both examples of hypothetical policy, it would rain down conjecture and extrapolations from the left, regardless of ANY assurances from a Republican administration.

After all, it only makes sense that there would be. THAT is part and parcel of ANY rational and thoughtful discussion by consumers.