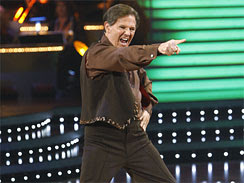 I used to think former House Majority Leader Tom DeLay was batshit crazy. Now, cha-cha-cha'ing around the "Dancing with the Stars" stage as he maniacally lip-synchs "Wild Thing," I'm utterly convinced. The Hammer is certifiably insane. As his Republican colleague Ileana Ros-Lehtinen (Fl) said, "Doing the cha-cha, it was like a bad car accident. You want to look away but you can't."

But DeLay's smart enough to realize he has zero chance of winning this season's competition, and has taken control of the situation by gerrymandering the judges table and removing the colorful Roberto Benigni sound-alike Bruno Tonioli, who labeled DeLay's performance "half magic, half tragic," telling Texas's dancing fool "You're crazier than Sarah Palin!" He's had Tonioli replaced with ex-American Idol judge Paula Abdul, who can find something to love about anyone, even angry, arrogant, corrupt, polarizing, hate-mongering partisan dictators like DeLay. The Hammer's also maneuvering to oust Len Goodman and have Palin installed in the judges seat instead. Palin is no stranger to dance. She's been side-stepping reality since she entered politics.

If this post didn't involve prominent Republicans seeking to improve their public images as they are about to step into various court rooms and face charges of malfeasance and other felonies, I would have to ask if Andy himself hasn't gone a little batty!

Certainly the manipulation of the dance judges by DeLay rates as astounding arrogance, but have we ever expected anything else from The Hammer? It has always been about him and his agenda, and Dancing With The Stars is demonstrating that DeLay has not changed one whit. His appearance on this show is a blatant attempt to "positively" tamper with the jury without resorting to the sort of negative pressure being applied to the jury panel of Mob boss Gotti fils. I am in fact very disappointed in ABC and owner Disney for participating in this subtle tampering with a jury. What are they promised for their cooperation?

DeLay is out to get off. Period. Texans - never likely to impress with brilliance - will fall for his fast-footed television shuffle crap. They will then sit through the trial and ask themselves at the end of it, "How can I vote to convict Tom when he did such a fine job dancing?"

About the only thing that could make this travesty worse would be for DeLay to import OJ's Brenda Moran to be panel foreperson. I'm sure she would be willing to trip the legal light-weight fantastic one more time if he asked her.

I guess this just goes to show that there is nothing too extreme to believe about the members of America's Taliban.