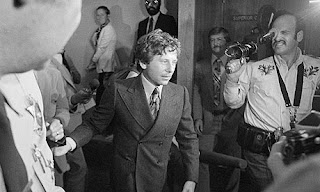 Like many in Hollywood and throughout the rest of the entertainment world, novelist Robert Harris has raced to the defense of child-rapist and international fugitive Roman Polanski, his pal and creative collaborator. In his NY Times op-ed piece Wednesday, "Why Arrest Roman Polanski Now?," Harris desperately attempts, as have so many others in the past several days, to create a mind-numbing smokescreen around the central issue of this case: that an innocent, defenseless, drugged and alcohol-plied 13-year-old was sexually violated in every orifice of her body. A despicable act which is very clearly prohibited by very specific law.

Harris's piece is both utterly infuriating in its cavalier and self-serving presentation, and shameful in how blatantly he shows zero regard for America's rule of law. There is so much wrong with his arguments that I will tackle them one-by-one:

Harris begins with: "...His past did not bother me, any more (presumably) than it did the three French presidents with whom he has had private dinners, or the hundreds of actors and technicians who have worked with him since 1977, or the fans who come up to him in the streets of Paris for his autograph."

French presidents? Is he kidding? Middle-aged Frenchmen accept and forgive Polanski's sexually deviant behavior and that's a defense? Perhaps Harris would welcome support from Italy's scandal-plagued, teenage-girl-chasing Prime Minister Silvio Berlusconi too? Are we really to let Polanski off Scot-free because movie people like him? Or because fans seek his autograph? Perhaps Harris has never witnessed the throngs of idiots who still drool all over O.J. Simpson as if he's America's former football hero instead of the brutal monster who butchered two people. And this may come as a shock to Harris: America's judicial system couldn't give a rat's ass whether certain criminal behavior bothers you or not.

Harris then asks, "Why now?" To which I reply, why the fuck not? The argument that he's been allowed to roam free for 30 years, therefore he should be allowed to stay free is moronic. Just because some lame-ass law-enforcement authorities had their collective thumbs up their asses for three decades does not give Polanski a get out of jail free card. Should we not arrest Nazi war criminals because they've been living in Argentina for 65 years and might be "liked" by their neighbors? Who cares when justice ultimately gets served, as long as it gets served. Let's keep things in perspective here: the Los Angeles DA's office has not committed any crimes. Polanski has.

Also on the "why now" front, Harris contradicts himself when he claims authorities have ignored Polanski since 1978, but then cites five occasions--1978, 1986, 1988, 2005, and 2007--where vigorous attempts were made to arrest him. While Polanski's crime was despicable, I would suspect that from a priority and resource standpoint, no one expected it to be a "red-hot manhunt" as Harris states it should've been if the case was so important. Still doesn't excuse the crime or create a basis for not continuing to pursue the criminal.

Harris then points to a 2008 documentary by Marina Zenovich, "Roman Polanski: Wanted and Desired," as the likely reason the Polanski case, and the pursuit, became hot again. Again I ask, who cares what the reason is, or when that reason surfaced? In fact, documentaries are supposed to provoke thought and raise awareness on the issues they cover. That's exactly their reason for being. The irony is, according to Harris unwittingly, that it perhaps took a filmmaker to bring Polanski to justice when for 30 years inept lawmakers could not.

Another misguided element in Harris's defense of Polanski is that his victim, the now-45-year-old Samantha Greimer, wants the case dropped and forgotten. As psychologists will tell us, there is a very twisted dynamic that often occurs between victim and victimizer. Greimer, at 13, was in no position to reconcile this horrific act. And it's likely had a profoundly negative affect on her throughout her adult life, which may be exactly why she needs to sweep this painful memory under the rug instead of having the self-confidence to demand justice for the man who stole her innocence. I ask Harris, should we also let kidnapper/rapist Phillip Garrido go free because his victim, Jaycee Lee Dugard, after 18 years of sexual imprisonment, might bizarrely have some affection for the man who fathered her children and who her children believe is their daddy? In America, we don't let victims decide when our laws are enforced.

One of Harris's more outrageous, infuriating statements is: "I make no apology for feeling desperately sorry for him. The almost pornographic relish with which his critics are retelling the lurid details of the assault (strange behavior, one might think, for those who profess concern for the victim) make it hard to consider the case rationally. Of course what happened cannot be excused, either legally or ethically."

Nice logic here. So, the guy who commits disgusting, unlawful sexual acts on a child is not lurid and pornographic, but those who report on it are? And then he adds insult to injury by saying "what happened cannot be excused" after he devotes almost a half-page column to doing just that.

Let me try to explain to Harris why journalists and bloggers recount in vivid, "lurid" detail how Polanski's middle-aged predatory penis found its way into a drugged and alcohol-plied Greiner's mouth, vagina and anus: because the sexual violation of a child by an adult is such a sick, twisted, perverted, unconscionable, inexcusable abuse. We write about the "pornographic details" to remind everyone, especially insensitive, clueless twits like you, of just how horribly violated this poor child was by Polanski. Perhaps if you think it's so awful to read about such details you might want to rethink your defense of the creep who committed them.

Harris ends his convoluted diatribe by claiming Polanski is a "doting father" who's children "want him home." I'm sure O.J.'s kids want him home too. Again I should remind Harris that in America we don't let children decide the judicial fates of their law-breaking "doting" dads.

In his closing line, Harris smugly quotes the Romans: "So cui bono," or, "who benefits?" The criminal justice system benefits, as does every single child who can feel some comfort and security that we still have laws that protect them from sexually-perverted adult predators who seek to horrifically abuse them.

The simple truth is, Roman Polanski is a pedophile, which is defined by Merriam-Webster's Dictionary as someone with a sexual perversion in which children are the preferred sexual object. There is nothing is this definition that mitigates this behavior. Nothing regarding how often the adult has sex with a child; whether or not the mother was negligent; how long ago the crime occurred; or whether the sexual abuser has any Oscars for filmmaking. Polanski's a pedophile and a fugitive, and it's time, after 30 years, that he finally face justice.

It is outrageously offensive to see the outpouring of support for Polanski from the world's elite artist-class. Are there two sets of laws according to these people? One for artists and another for everyone else? And are we supposed to be influenced by what these apologists have to say in trivializing Polanski's despicable acts, especially Woody Allen, who married the girl who was basically his own stepdaughter after raising her since childhood? Shame on them all.
Posted by The Ostroy Report at 7:33 AM

I'm having a hard time with what should be done. Why did it take so long to get him when they knew where he was?

Since he must have money, why not make him set up a women's shelter and fund it here in the US? That would do more good than putting him in jail.

Keep the following in mind....

There was a time in this country - not long ago - where rape was a capital offense. Indeed, it wasn't until 2008 that the US Supreme Court ruled that child rape couldn't be a capital crime anymore, a decision that Barak Obama disagreed with.

Personally, I think however long it took to get him, the dude should be stoned in the town square. This ought not to be an issue as to WHETHER the man goes to prison. Rather, it ought to be about for HOW LONG he goes. I think any term of length - say 15 years or so - is a life sentence for him given his age and that suits me just fine. He's had a nice cushy life while he should have served a prison sentence.

This guy Harris? I read his books, but I will NEVER again buy or read one. Eff that guy. He is a typical Hollywood dude - if it feels good it's all right and damn anyone who gets in the way of what I want to do.

That was said by Plato. Maybe Harris has heard the name. He should look him up.

It makes one wonder also, why anyone wanted anything to do with him for the past 30 years. Harrison Ford, Adrian Brody, Walter Matthau, Hugh Grant, Kristin Scott Thomas, Sigourney Weaver, Ben Kingsley and Johnny Depp have all been in his films after 1978----why didnt these actors protest? Of course, I realize that if they had turned down the roles, others would have just taken their places but still, where's the integrity?

MANY people knew where he was for years---ESPECIALLY during filming. Why couldnt one of the actors in his films call someone and say "we're filming in France"?? Thy could have nabbed him countles, countless times. It's not like he's Bin Laden hiding in a cave somewhere (of course, he's dead, but that's another story).

Why was he applauded for his Best Director win in 2002 for the Pianist? Pete Rose is BANNED from baseball for GAMBLING and is not allowed in the Hall of Fame, but Polanski can fucking molest a child and gets REWARDED and APPLAUDED for it! UNBELIEVABLE!

Andy, now a shitload of actors and directors are coming to Polanski's rescue. Read this unbelievable story:

Lurid? Nothing could be more lurid than the victim's testimony, available on The Smoking Gun (http://www.thesmokinggun.com/archive/years/2009/0928091polanskiplea1.html). I challenge anyone NOT to have a visceral reaction to the testimony. Unfortunately, Harvey Weinstein and Woody Allen (and perhaps Harris) may have reacted in a manner 180 degrees from my experience ...

The minister of culture in France was among the first to run in defense of POlanski. Himself a participant in sex tourism as he describes it in his own book

Describing his trips to Bangok he says...
"All these rituals of the market for youths, the slave market excited me enormously ... the abundance of very attractive and immediately available young boys put me in a state of desire."