President Scarborough? "Morning Joe" Would Be a Viable Threat To Obama in 2012 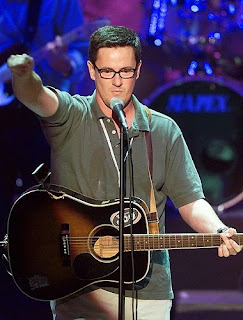 The ever-shrinking right-wing-nutjob base can have Sarah Palin. My early money for the Republican Party's next presidential nominee is MSNBC pundit and former Florida congressman Joe Scarborough.

In case you haven't noticed, this Joe has been more ubiquitous lately than a cup of Starbucks Java on a New York morning. He's everywhere these days, all dressed up (suits vs fleece) with only one place he'd probably love to go: the White House. And if he plays his cards right, he could give President Barack Obama a very difficult challenge in 2012.

Scarborough's been smartly playing the moderate card lately, which is not what we can say for some of the other 2012 "front-runners" like Palin, Newt Gingrich and Mike Huckabee. These guys are so fringe in their ideology that they could never appeal to the all-important middle.

So what does Morning Joe have going for him? To begin with, he has legislative experience, having served Florida's 1st Congressional District from 1995-2001. And, having the hometown advantage in this hotly contested state would be a huge asset in a run for the presidency.

He's also a shrewd operative and knows the issues. He's a fiscal and foreign policy conservative and, though it's been eight years since he was in Congress, where he was socially conservative as well, he's embraced the center, especially when it comes to the environment, immigration and human rights. He's extremely articulate, charismatic and telegenic with a warm squint in the eye and a winning grin. A straight-talking George W. Bush-basher who's savvy and calculating enough to sense he can capitalize on his party's incredible frustration and dissatisfaction with its past and current leadership, as well as tap the wave of disenchantment among Democrats and Independents. He's a young (46) Tonight-Show-ready guitar player who could be the closest thing ever to the GOP's version of Camelot. And, he has great national exposure through his morning television program as well as constant appearances on other high profile NBC shows such as Meet the Press.

Scarborough presents one of the biggest potential threats to Obama, who voters will be judging, one way or another, over his handling of Iraq, Afghanistan, the economy and health-care....and how far he's perceived to have shifted the country's politics uncomfortably to the left. To be sure, the president is facing many uphill battles while staring at precipitous declines in his approval rating. He has failed to connect with voters over his health-care reform bill; needs to stem the hemorrhaging of jobs; has been under attack for racking up massive deficits; needs to figure out a successful Iraq exit strategy; and is stuck with a difficult war in Afghanistan, which is getting worse by the nanosecond. He's going to have to be nothing short of a miracle-man these next 2-3 years if he's to survive politically and fend off challenges from viable opponents like "The Scar."


On another note, we could use your help at The The Adrienne Shelly Foundation. We're a 501 c 3 tax-exempt, non-profit organization dedicated in my late wife's honor, and with a simple mission: supporting women filmmakers. Adrienne, who wrote, directed and starred in the hit film WAITRESS, was killed November 1, 2006. Through the Foundation, her commitment to filmmaking lives on. We've established scholarships, grants, finishing funds, screenwriting fellowships and living stipends at NYU's Tisch School of the Arts/Kanbar Institute of Film; Columbia University; American Film Institute; Women in Film; IFP; the Nantucket Film Festival; the Tribeca Film Institute; and the Sundance Institute. Your generous contribution will go a long way towards helping us achieve this very important mission. Please click here to make a donation. Thank you.
Posted by The Ostroy Report at 7:03 AM

If the Dems don't come through with a health care bill that has a public option, they can kiss control of congress and the white house good bye.

The low numbers for Dems is because they are not getting it done.

They need to grow a few and just do it.

I can't believe we are blowing it.

He'll never get the Republican nomination. His move to the center is too soon. He could possibly win a general election, for all the reasons you state, but the Repub nomination will more likely go to another right wing idealogue. Nice post, though. Food for thought.

Yea, Joe will run and not really say what he is for or what he will do. He'll look like a moderate in hiding.

Then the rabid righties will continue to destroy our country.

Baby Boomers are nuts to go along with these folks. Most of us aren't rich and need all the help we can get. Or their kids best be rich so they can take care of them. What a disgrace! We have worked our whole lives and for what? I am so glad my parents are not living to see just how much our country has fallen.

What about the dead secretary/intern in his office? What ever became of that matter?

Andy, I'd agree, except for the issues that will be raised by questions such as why Uncle Joe resigned his seat.

You left out two important words in this fluff piece about Scarborough...Lori Klausutis.

If you think he can get past answering questions about that because he NEVER did when he was in office here in Florida, then you are delusional.

I forgot about the dead woman.

He won't get the nod.

Rabid righties are the primary voters and they are nuts.

BTW. I say bromance because you're obviously smitten:
"He's extremely articulate, charismatic and telegenic with a warm squint in the eye and a winning grin."
Creepy! I just have to say it: Gawd, I Hate Huff'n Puffington Smoke!

Chantal, I'll give you the benefit of the doubt and assume you're not just some homophobic twit making sophomoric judgements....and instead accept that you're simply just naive and myopic. Just because someone can recognize a politician's assets doesn't mean he's "smitten." It simply means I, unlike you, have an ability to step outside my own narrow-minded head and recognize how someone like Scarborough, or Bush, or Newt, etc, can appeal to others. Free your mind, pal, you'll be amazed at the world out there.

Sure, and somehow this lame article failed to recall the intern Joe was nailing was found dead in his office. That'll go over really well in a national race. Bring in on, Joe. You're a clown and, I bet, not much of a guitar player.

Surely you can find plenty of attractive men whose reputations are less suspect. Someone you can bring home to the parents.