Republicans Scream "Stay Away From Our Kids, Obama! If Anyone's Gonna Fill Their Heads With Partisan Crap It's Gonna Be Us!" 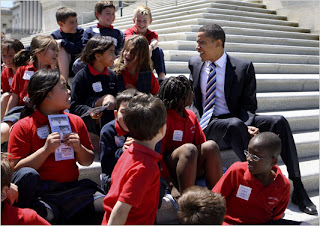 The latest controversy that has Republicans' panties in a collective snit is President Barack Obama's plan to address the nation's school children Tuesday in a speech designed to motivate, challenge and inspire excellence through education. Sounds like a no-brainer, right? Well, not if you're a closed-minded conservative who views Obama's address as a form of "indoctrination."

A parent interviewed on Fox News Thursday morning said she's so angry that she's keeping her children home rather than subject them to Obama's speech: "This is government of the people...it's not about us having to do for government but what the government should be doing for us."

So much for the selfless principle behind President John F. Kennedy's stirring, patriotic plea to the American people during his 1960 inauguration address: "Ask not what your country can do you for, ask what you can do for your country." This woman couldn't have presented the typical Republican 'I-don't-give-a-shit-about-anyone-but-me' philosophy any clearer.

And right-wing media pundits have piled on. In her column Thursday, Michelle Malkin incredulously warns that Obama's campaign calls for kids to "Create posters of their goals." She raises this flag as if there's something wrong with challenging our children to aspire. To have goals. Am I missing something? Just what is Malkin and her Republican brethren so afraid of, anyway? That kids will think Obama's a cool guy who makes a lot of sense? How about giving them some credit for being able to make their own determinations and draw their own conclusions?

Not likely. These Obama-hating conservatives and their dumbed-down, myopic philosophies appeal to the lowest common-denominator of their party, which is why it got trounced in the last election. There used to be a time when a presidential address to children would've meant something. When it wouldn't have been turned into some cheapened partisan charade played by self-serving political operatives trying to shape the next election. Or by ignorant, fearful voters who've been brainwashed into thinking that Obama is the devil-incarnate out to poison their children's minds.

'Indoctrination?' Really? Does anyone really think Obama is going to very publicly abuse his power by making some sort of blatant amoral partisan appeal to our children while the whole world, including his rabid critics, watches? Do you think he thinks he'd get away with something that obvious? Jeez, people, I know the president's behavior seems odd given that in eight years George W. Bush couldn't string together two sentences without mangling the English language, and that he had the intellectual curiosity of a slug, but how about we just take Obama's intentions at face value? That he's a president who cares about children, what they think, and who wants to engage them in the national discourse.

What a terrible concept: a U.S. president talking with school kids about the importance of education, of expanding their intellectual horizons, of setting goals, and of getting involved in civics. Wow. Truly despicable lessons to impart on children, huh? Why expose our kids to such irresponsible 'indoctrination' when we can just keep 'em home that day and fill their heads with the really objective stuff like abortion is murder; gays are evil; guns are good; Obama and Democrats are destroying life as we know it; and that God is a Republican.


On another note, we could use your help at The The Adrienne Shelly Foundation. We're a 501 c 3 tax-exempt, non-profit organization dedicated in my late wife's honor, and with a simple mission: supporting women filmmakers. Adrienne, who wrote, directed and starred in the hit film WAITRESS, was killed November 1, 2006. Through the Foundation, her commitment to filmmaking lives on. We've established scholarships, grants, finishing funds, screenwriting fellowships and living stipends at NYU's Tisch School of the Arts/Kanbar Institute of Film; Columbia University; American Film Institute; Women in Film; IFP; the Nantucket Film Festival; the Tribeca Film Institute; and the Sundance Institute. Your generous contribution will go a long way towards helping us achieve this very important mission. Please click here to make a donation. Thank you.
Posted by The Ostroy Report at 9:33 PM

Athena Smith said...
This comment has been removed by the author.
7:08 AM

That's what's wrong with Obama's plea. He is one part of the government and he should keep that in mind.

Andy says "Does anyone really think Obama is going to very publicly abuse his power by making some sort of blatant amoral partisan appeal to our children while the whole world, including his rabid critics, watches?"

The key word is "think." They are not thinking but "feeling." These people feel that Obama is evil and Democrats are out to ruin America.

They feel that way because they were not taught how to think, but to feel. That's how they become their very own "decider."

Even Deep In The Heart of Texas, some are asking why the hubbub, Bubba: "The hysteria in North Texas and elsewhere over President Barack Obama's planned speech next week to schoolchildren has been both astonishing and depressing," decries The Dallas Morning News.

The News continues: "...what about conservatives who railed against Hispanic student activists' plans in 2006 to skip school for a day to demonstrate for immigration reform? Why was truancy wrong then but warranted now?" Dangerous words in Texas! When one implies a Texan deserves a derogatory epithet - such as "hypocrite" - one had better back that up with fact lest the leather be slapped!

At least The News concludes with the correct tone: "It's dismaying to see so many Americans assume the worst about the president – our president – and his motives. Is this really the kind of country we want to be?"

Considering how the Republicans and their Borg-brainless minions are acting lately, a rational human being - even one from The Dallas Morning News - would have to conclude "Yes, it is."

We saw horrible things this past week. First a handicapped woman, struck by two auto immune diseases, was booed by some conservative bullies who could not understand what the bill is all about. In plain English they never read it.
Then the “parents’” reaction who believe that Obama will send the Bolsheviks into the hearts of their kids.

I read that Obama’s speech is about the importance of staying in school, an issue so close to the hearts of all of us who work in the educational system and fight to slow down the unprecedented drop out rate, especially among the less privileged. On the other hand the correlation between poverty and criminality has been well established. Schools lose students, jails get inmates. Plain and simple. And to have PARENTS of all people insisting that a speech on the importance of studying and sticking to school equals propaganda is beyond unbelievable, is beyond stupid, is beyond irrational. It is simply unpatriotic

But my wrath right now, my indignation is not against those parents who I suspect have been blinded by racial hate. My indignation is against school administrators and teachers who are convening as we speak to decide whether to allow the president’s broadcast in their classrooms. I have one thing to say to them. The world is watching. Do not make the school system of this country the laughing stock of the planet.

It is important for the right wing neocons to dumb down our society.
And no better way to do it but through our school system. So why allow Obama to tell the kids its important to be smart..
further from the truth of usefulness ... need for hamburger flippers a necessity./

Too lazy to develop a public policy, too stupid to see they are but puppets of the wealthy special interests manipulating them, the loud, vocal, angry, selfish, have exercised their first amendment rights with no respect for ours,
abbreviating ours. America's media does not accurately distinguish between these bullies and the truth, adding to their power and their fury

Communism? Really? Is that the best they have to work with? 50 yr old fear mongering? WEAK

No offense, but Waitress was hardly a "hit film." That said, I applaud both your sentiments in this post and your efforts to raise money for scholarships, which as a parent of a freshman college student, I promise are badly needed given our government's lack of adequate support and the right's seeming determination to either keep all but the wealthy out of college, or failing that, to guarantee they will graduate so deep in debt that they will have no choice but to be subservient, well-behaved employees/indentured servants for greedhead multi-national corporations.

Anon 12:46...that you feel the need to disparage Waitress, to me in particular as I try to help other people, says an awful lot about you as a human being. You also clearly know very little about the movie business, as $20-million at the box office for an indie is a major success. Waitress remains one of the higest grossing indies in years (and was #1 or #2 in 2007).

Have a nice day. Sounds like you need one...

I am truly saddened by the ugliness of racism that is rearing it's ugly head at our President each and every day. Where is the respect for our President. Why is President Obama subjected to such unrelenting venom and hate. I am afraid for our country.

Please Limbaugh, Beck, Malkin, Ingram, Fox 5 News, et al, why are you trying to polarize the races. Why are you inciting and encouraging people not to support our President.

President Obama has a lot on his plate. America is financially broken which is not President Obamas fault. He wants to make our great country healthy again.

Conservatives and many liberals who voted for Obama, are being called racists! We are not against a black man being president, and that is why so many who are not black, voted for him.

He has simply let us down.
He is the wrong black man, doing a job that he has proven he is not qualified for. A white, red or yellow man with no credentials would get the same reception. He could have pulled it off, ...but for the type of staff he has lowered down to, and surrounded himself with.

They are not racists, but anyone who disagrees with Obama or anyone of his CZARS, is certainly labeled as a racist! That is for sure.

One does not have to be non-black to be a racist, and that perseption shows the depth of this ignorance...