Roman Polanski Must Finally Be Brought to Justice 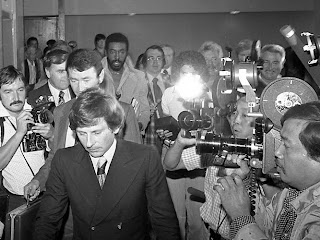 Roman Polanski 76, is a very famous man, and sometimes for having experienced unfathomable tragedy. Though he escaped Poland during the Nazi occupation, his mother was killed at the Auschwitz concentration camp. In 1969 his pregnant wife, actress Sharon Tate, was butchered at the savage hands of Charles Manson's murderous disciples.

Polanski's also known great success as the brilliant director of several acclaimed films including "Rosemary's Baby" and "Chinatown." But let's be very, very clear about one thing: none of the above has anything to do with the fact that he raped a 13-year old child, nor should his life experiences be used, as some are suggesting, to excuse this despicable act and keep him from being extradited to the United States from Switzerland, where he was arrested days ago, and ultimately jailed.

Back in 1977, the then-44-year-old Polanski pleaded guilty to "unlawful sexual intercourse with a minor", 13-year-old Samantha Geimer. He was sent for psychiatric evaluation and released after a 42-days, after which he fled to France fearing imprisonment. He's had an arrest warrant outstanding since 1978.

I'm sorry, but it should not matter how horrifically he or his family has suffered; how talented he is; how much time has passed; or who has "forgiven" him, as his now-45-year-old victim has done publicly. He's an admitted rapist; an on-the-lam coward who's thumbed his nose at the law for over thirty years.

Is there really any debate here? Are there really two sides to this story? He raped a child, for Pete's sake. He plied her with drugs, alcohol, and sodomized her. This was not "consensual sex," as a 13-year-old is neither old enough or mature enough to engage in such acts. In America we have laws against 44-year-old men drugging and raping little children. It's absolutely unconscionable that anyone would imply that his cinematic accomplishments should be reason to cut him slack. How dare they. It's time that Polanski pay the price for what he's done. And, he should now serve even more time for fleeing our criminal justice system. The ultimate message from this case cannot be, "make some great films and we'll let you rape kids without punishment."

What impressed me immensely in this story is that in the vast majority of articles he was referred to as "the renowned director" "the famous artist" or the "76-year-old director" and so on.
On one hand I understand it happened 36 years ago.
On the other hand I would like to express my absolute disgust at the hypocrisy of the media. For if that man were the average Joe, how many times would you see in the article the word "pedophile" or "sexual molester"?

Actually in my classes yesterday we took a good look at how the media covered the story and the words they used.
I am glad to see this article today. I will incorporate it as well if you don't mind.

More shameful reporting from Europe. The French newspaper LIBERATION reports the story as « ancienne affaire de moeurs aux Etats-Unis » (an old story on moral affairs in the US)

In LE MONDE I read that Harvey Weinstein complained that «unlike the European film makers, Hollywood has hardly mobilized itself to bring public support to Polanski » while his crime is not mentioned not even once.

In PARIS MATCH I saw the worst by far. “A 13-year old Lolita turned him into a cursed man”

What would their reaction be if it had been their 13-year old daughter?
I wonder where all the feminist organizations are hiding….

I borrow the words of Benjamin Netanyahu spoken at the UN and address them to those who defend Polanski.

Have you no shame?

Andy has nailed it spot on - a perfect bulls-eye.

This man is the Hollywood equivalent of Marc Rich. Powerful friends (this time in the media) want to let him off the hook for crimes after he has fled justice. The difference here is even more disgusting....

Similarly, certain crimes against women produce harsher penalties when they involve those who are underage.

Realizing that this case is old and cold, it's far from beyond precedent to incarcerate people decades after the crime when time has eroded the notoriety of the crimes and the consequences of their effect. Look, for example, at the white supremecists who have been tried 30 to 40 years after church bombings and the killings of black civil rights activists.

The circumstances in this case is even more apparent.

This is a guy who participated in the justice system so as to plea bargain his offense to a less crime - TO WHICH HE PLEADED GUILTY. A lot of the coverage ignores this and leaves the intimation that he is being persecuted (not prosecuted) for an old and cold matter. No - he stands convicted as a result of his own plea bargain.

He has gone out of his way to thumb his nose at the American justice system by assiduously avoiding the US and places where he can be extradited - in short, he KNEW he was a criminal, he KNEW he had a penalty to pay, and he decided he didn't want to pay it.

Whatever he did in life afterwards is of no moment. Look at John List from New Jersey - he murdered his family, took on a new name and lived an exemplary life afterwards for decades. Do we forget that?

This guy should be brought back in chains, his plea bargain should be reversed, he should be re-tried for the higher crime and he should also be charged for unlawful flight.

Thank you for this post, Andy. I was outraged at how the press presented this paedophile as a distinguished human being, exalted above the rest and unaccountable for the rape and sodomy of a little girl. He is a despicable predator.

In addition to other acts, Polanski took nude pictures of a 13 year old girl. These photos were found in his camera. If Polanski had stopped right there, and never drugged and raped the girl, what would his punishment be on the charge of child pornography?