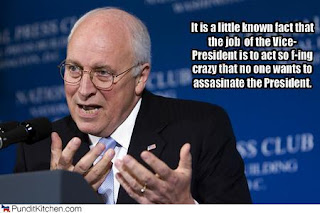 Wallace: It's been eight years since we were attacked on Sept 11th by al Qaeda. Mr. Vice President, is America safe?

Cheney: Is Nancy Pelosi's voice grating and shrill? C'mon, Wallace, you must've been one helluva softball pitcher as a kid. What kind of dumb question is that? Of course we're safe? Notice any attacks lately?

Wallace: No. But it took eight years between the first World Trade Center attacks and the 9-11 attacks. Doesn't it worry you that Al Qaeda is a methodical planner and could just been gearing up for the next wave of terror?

Cheney: No, under the Bush administration we employed the finest, most highly-trained operatives to locate, infiltrate, and destroy countless al Qaeda cells. We killed their leaders. We wiped 'em out, baby. Mission accomplished. And we did it by being tough of these bastards.

Wallace: Yes, but, you have come under extreme fire lately now that we have a better understanding of the interrogation tactics--which many believe to be cruel and illegal--which the administration secretly and without Congressional approval authorized the CIA to use on HVT's, or High-Value Targets. There's some pretty awful stuff that took place, no?

Cheney: What are you, a pussy Wallace? What specifically do you have a problem with?

Wallace: Well, threatening to drill holes into prisoners' heads with power-drills...I mean, Mr. Vice President, that does seem pretty harsh and inhumane according to American standards.

Wallace: Wait, wait, wait....Mr. Vice President, that's ok, I get it. You're saying we did what we had to do to keep the country safe. At all costs. We had no choice.

Cheney: (angrily motions to his assistant) This ain't Mike Wallace? Who the fuck is this guy? I thought I was talking to Mike Wallace. I should shoot you in the fucking face over this. (turns back to Wallace)You have any more questions, kid?

Wallace: Yes, if we may proceed with the interview....

Wallace: Mr. Vice President, you've been very vocal these past 8 months in harshly criticizing President Obama and his administration's national security policies. You accuse him now of using the Justice Department for political purposes over the CIA scandal, and that it's making America less safe as a result. Your critics charge that (a) no administration in history has used the various levers of government for their own political gain more than the Bush administration, and that (b) your comments are nothing more than a self-aggrandizing attempt to redeem yourself for failing to protect us on 9-11, for getting us into an unjust war in Iraq, and for violating international law, the Geneva Conventions, the U.S. Constitution and America's own rule of law. In short, Mr. Vice President, that it's all a desperate PR campaign to excuse and justify committing various war crimes. Your response?

Cheney: That's it, get me my shotgun! I'm shooting this fucker in the face! Come here you little bastard..I'm gonna....


On another note, we could use your help at The The Adrienne Shelly Foundation. We're a 501 c 3 tax-exempt, non-profit organization dedicated in my late wife's honor, and with a simple mission: supporting women filmmakers. Adrienne, who wrote, directed and starred in the hit film WAITRESS, was killed November 1, 2006. Through the Foundation, her commitment to filmmaking lives on. We've established scholarships, grants, finishing funds, screenwriting fellowships and living stipends at NYU's Tisch School of the Arts/Kanbar Institute of Film; Columbia University; American Film Institute; Women in Film; IFP; the Nantucket Film Festival; the Tribeca Film Institute; and the Sundance Institute. Your generous contribution will go a long way towards helping us achieve this very important mission. Please click here to make a donation. Thank you.
Posted by The Ostroy Report at 7:17 AM

TORTURE : "It cannot be the subject of an ideological tug of war, both sides taking extreme and illogical positions - torture never works, torture always works, torture is always immoral, torture is moral if it saves lives. Torture always is ugly. So, though, is the hole in the ground where the World Trade Center once stood."

"...former CIA inspector general John Helgerson tells the Washington Post that “waterboarding and sleep deprivation were the two most powerful techniques and elicited a lot of information.” Such extreme methods should obviously be used only in a carefully controlled setting against top detainees harboring information about ongoing plots......provided intelligence valuable enough to justify their harsh treatment.... detainees in the interrogation program made the CIA aware of plots to attack the U.S. consulate in Karachi, Pakistan; to fly hijacked aircraft into Heathrow Airport; to derail a train in the U.S.; to blow up gas stations in the U.S.; to fly an airplane into the tallest building in California; and to collapse bridges in New York. If any of the planned attacks in the U.S. had come off, many of the same critics braying about the CIA’s interrogation program would be outraged about its failure to “connect the dots.”