Psycho Kidnapper-Rapist Phillip Garrido Should be Put to Death 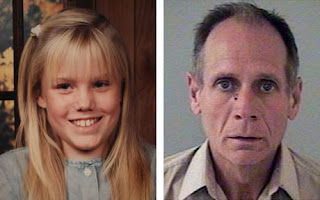 In 1988 Phillip Garrido was released from prison after serving eleven years for kidnapping and raping a Nevada woman. He was supposed to serve fifty years but was paroled and tagged a registered sex-offender. And now we know the chilling details of the 1991 abduction of then-11-year-old Jaycee Lee Dugard, now 29, who Garrido and his wife Nancy grabbed off the street in front of her Northern California home and held her prisoner in their backyard shed, during which time he repeatedly raped her and ultimately fathered her two children, 15 and 11. Do the math: she was impregnated at age 14.

This sick monster, who delusionally called the ordeal a "heartwarming story" when arrested, should not have been free to stalk his child victim. How is it that one can kidnap and rape someone, receive fifty years, and be on the street in ten? There's something radically wrong with our criminal justice system when animals like Garrido walk amongst us after committing horrific crimes.

So now what do we do with this deranged psychopath who has zero chance of being rehabilitated? If it was up to me he'd be put to death. Get rid of his sorry criminal ass once and for all so that he can no longer pose a threat to another human being, inside or outside of prison. Why should we pay a couple of hundred thousand dollars to incarcerate him for the rest of his life? I don't want my tax-dollars paying for his shelter, his three daily squares, his television, his prison-yard weight-lifting, his college degree. I don't want him reading, watching movies, listening to music, exercising.

As the father of a young daughter I cannot fathom what Dugard's mother and stepfather have been through. What Garrido did to this poor young girl is beyond unconscionable. He robbed her of her life. He mentally, verbally, physically and sexually abused her for 19 years. He destroyed her spirit. There simply is no mercy that should be shown this beast. I want him first gang-raped in prison, then castrated, and finally executed. With Dugard pulling the lever.
Posted by The Ostroy Report at 6:04 PM

More of your tax dollars will be spent to put him to death than keep in alive for the rest of his life in prison. There is plenty of research out there for you to know that...

Put him in jail for life.

you took the words out of my mouth. And then I thought about our ballooning deficit, depressed consumer culture and the current popular sway away from capital punishment. Have I solution! Let's charge to have folk visit this crazyhead in prison and allow for something a rung above the dunk tank. Perhaps one could throw a baseball at his face or his genitals from close range? Obviously, there would be limits because too much pain would ruin the cash-generating component (you'd no longer be able to torture the subject if he were dead). Perhaps you could converse with him for 15 minutes and then pour boiling coffee on his genitals (genital torture is a theme here). Anyway, u get the drift. Good blog!

I have watched your blog for several years and always respected your thoughtful and reasoned comments. I am also the father of a young child, but don't think the life of anyone, even a clearly mentally ill scumbag, should be boiled down to dollar amounts. The problem is that being given 50 years should mean 50 years. Your knee jerk and mindless reaction is forcing me to remove you from my mailing list. This man is a scum bag and a worthless human being,but taking the easy and cowardly way out and not facing up to the failings of how we treat the mentally ill (and protect society from them) betrays us all. I am done with your blog

he should be drawn and quartered

Anon 12:38....so you've read and liked my blog "for years" and in one post that you disagree with I'm "removed from your mailing list" and you're "done with my blog." Wow. Isn't Democracy great! Must be quite frustrating spending your life searching for people who agree with you on every single issue.

Didn't any of the neighbors -- next door? on the block? notice anything. I don't believe in spying on others, but a suspicion of someone being harmed could be reported. Where were the parole officers who were to check on him.

Why not make drugs, like alcohol, legal so states can stop cramming their jails with addicts, who need rehabilitation, and keep the serious offenders in prison for their full term. However, I think sex-offenders could use some rehabilitation too instead of just rotting in jail.

He should be put in jail for life. In jail he will undoubtly have the same fate of Jeffrey Dahmer.

Don't know the source of that quote, but it applies here.

I've added you to my reader to make up for anon.

i feel your anger. but you forgot a couple things. the people in charge of his parole and the sherrifs dept should also be held culpable.

reports were made at least 3 years ago of children being in this monsters home. the officer never went further than his front yard.

there are reports of people seeing kc up to 10 years ago...in his presence. what the hell were parole officers doing? why werent they talking to neighbors?

the system failed the family and the girl..and that is criminal and has alot to do with women and children still being viewed as property by the law in many states

and i have to disagree with some of the posters here...he is not insane...he is evil. only evil people do what he did to a child.

i do not believe that the state should execute him. i do believe that he should be placed into gen pop. things have a way of working out when a filthy child molesting bastard is placed in gen pop.

Anon 12:38....so you've read and liked my blog "for years" and in one post that you disagree with I'm "removed from your mailing list" and you're "done with my blog." Wow. Isn't Democracy great! Must be quite frustrating spending your life searching for people who agree with you on every single issue.

Firstly... Yes.. "for years", about 4 or 5 actually. I said I enjoyed your blog. I have not always agreed with you, but again, you are obviously so self absorbed that you assume that it was one time.

It must also be frustrating not being ably to accept people who find a view that knee jerks straight to the death sentence the last straw and unacceptable in a civilized society.

And before you rant again, I tried to remove the blog but still got an e-mail. And yes I have experience in the Death sentence sphere. My cousin was murdered 10 years ago, his "Murderer" executed after a confession, and later found to be mentally ill. And his actual murderer arrested 2 years later.

Garrido is a bastard animal, he should be executed by impaling him with a metal pole stuck in his ass, so that he could rot in hell.

You know most of these so called “police/ parole officers” always have a chip on their shoulders, and even when they fail at their jobs they appear arrogant like saying “what are you going to do”, let’s face it, she saved herself, she was not saved by the authorities. Does anyone believe that the authorities were still investigating her disappearance? The car used in her kidnapping was in the backyard, the lazy ass cops didn’t even bother to go through the backyard when the information indicated that kids were living back there, they didn’t check local schools to see if the kids were going to school or even asked to see the kids, no report to child protective services, boy how lazy can you be and still pick up your public service check, not to mention the parole officers who failed to visit and find out where this freak was living and what he was doing. I guess she was taken in 1991, and in 1993 (only two years later) after violating probation he spent for 4 months in federal prison (California have yet to release any details of that violation or explain why he was again released into the community). Nevada officials said they were never notified of Garrido's parole violation, which would have allowed the state to revoke his parole. Had California parole inspected his home in 1993, we would not be here now asking questions, we would be saying our system works, now I am not sure of anything. Because now I wonder how many more of these freaks are in our country doing the same thing under the noses of our so called authorities.

Yes, I agree he should have served all the time for his first offense, but don’t let our authorities off the hook. I can only say if you have a neighbor that fits this profile, call and call again to try to ensure that this does not happen again. Simply amazing.

I cannot imagine what this family went & is still going through! I hope I never get the chance. Having an 11 year old daughter, I was especially disturbed by this.
My first reaction was the whole "revenge fantasy" thing, but then when I came to my senses and realized that would be just as wrong as what this monster (who is still a human) did.
It is my opinion, that how a society deals with people like this speaks volumes about their character! I think the Amish are wonderful role models in these situations. Let's be happy for the family and work on forgiveness.