This Democrat is Disappointed with his President and his Party 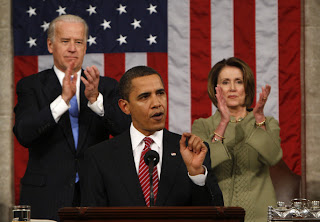 For eight miserable, depressing, frustrating years Democrats watched helplessly as President George W. Bush and the Republican Party used every legal, illegal, amoral, unethical and unconstitutional ploy to first gain, consolidate and then hold onto power. They didn't care who or what got in their way. They were a robotically disciplined, ruthless political goon squad which stayed on message like a brainwashed cult.

It began in 2000 with a stolen election handed to Bush by a partisan Supreme Court, which bucked its own federalism position to end the Florida recount. It continued with manipulating intelligence and perpetrating lies in order to invade Iraq in the wake of the 9-11 attacks. From there we saw the outing of CIA agent Valerie Plame; the Abu Ghraib abuses; the firing of U.S. attorneys; illegal wiretappings and the breaking of FISA laws; and as we learned this week, illegal torture and interrogation techniques involving guns, power-drills, death threats and mock executions.

Power is not something modern Democrats are used to. The GOP controlled both houses of Congress from 1994 until 2006. And with the exception of Bill Clinton's two terms from 1992 to 2000, they've controlled the presidency dating back to Ronald Reagan in 1980. But now Democrats not only own the White House, but have an overwhelming majority in the House and a filibuster-proof majority in the Senate. Yet oddly they're still acting as if they're on the outside looking in. With no power. At the mercy of Republicans still. They appear leaderless and without direction. They seem lost and ineffectual. And it starts with Obama, who seems overwhelmed by several domestic and foreign crises, causing him to waiver and flip-flip in attempting to carry out his vision.

Obama needs to accept that voters elected him president and gave Democrats congressional majorities to bring about change and not be a bunch of weak-kneed, spineless namby-pambys who still fantasize about bi-partisanship. The president needs to grow some balls and start acting a little Bush-like in pushing through his agenda. It's time to stop singing Kumbaya.

So here's some advice to Obama on how and where he needs to get tough:

1. Health care: stop pussyfooting around while conservatives destroy your reform bill. Get on the tube in a primetime address to the nation and forcefully dispel the myths being perpetrated by disingenuous Republicans. Look straight into the camera and tell Americans that they are being lied to. That he's about to drop his public option provision is a colossal sign of weakness. Get tough, dammit!

2. Prosecute Bushevik war criminals, including Bush and Cheney if the evidence is there. You can bet your ass that's what they'd do if the situation was reversed. These criminals need to be held accountable, or America's rule of law is meaningless. Forget your "I'd rather look forward than backward" nice guy routine. Message to Obama: against the ruthless GOP attack-machine, nice guys finish last.

3. Tell Dick Cheney to shut the fuck up once and for all: commenting on the new CIA torture scandal, the bloviating former vice president charged this week that Obama was politicizing the Justice Department at the expense of national security. Obama needs to figure out a presidential way to tell Dr. Evil to shut his self-aggrandizing, ass-covering trap already. Enough's enough from Darth Vader. Nobody gives a shit what he thinks.

4. Guns at rallies: allowing armed freaks to parade around rallies and town halls like Rambo while the president and Congressmen are feet away is the most insane thing I have ever seen, and Obama needs to put an immediate end to it without worrying about hurting the NRA's feelings. For Pete's sake, the Busheviks banned "No Bush" t-shirts at rallies. Can you imagine them letting protesters with assault rifles near Dubya?

5. The Release of Pan Am Terrorist Abdelbaset Ali Mohmed al-Megrahi: After serving less than a third of his 27-year sentence, Megrahi, terminally ill at 57, was freed by the Scottish government last week on "compassionate grounds" so he could go home to Libya, where he received a hero's welcome, to die amongst family. This monster showed zero compassion in killing 270 innocent people when he blew up Pan Am Flight 103 over Lockerbie, Scotland in 1988. Obama's tepid response--that it was "highly objectionable"--fell far too short. Releasing this butcher is an outrageous, unconscionable act, and one that is highly insensitive to the victims' families. Where was Obama's stern warning not to release him? Next time get it right, O.

6. The Economy: by any measurement, the economy has clearly bottomed and is in recovery. The housing, banking and financial industries have strengthened; job losses have been halved; Q2 GDP contracted just 1% from the previous 6.4% in Q1; consumer confidence is up appreciably; and there's a raging bull on Wall Street. Obama needs to address the nation and, in Reagan-esque fashion, ask Americans if they're better off today than they were 10 months ago when Bush's economy was in a death spiral. Take the offensive and claim success!

A final message to Obama: it's time to get aggressive, show some certitude, and be resolute in your positions. Stop banging your head into walls trying to create bi-partisan love and start showing some tough love. Do what voters elected you and Congress to do: shake things up, make radical changes, and take America in a new direction. If you don't, you will lead your party down a ruinous path in the 2010 midterm elections, and you are certain to be a one-term president.


On another note, we could use your help at The The Adrienne Shelly Foundation. We're a 501 c 3 tax-exempt, non-profit organization dedicated in my late wife's honor, and with a simple mission: supporting women filmmakers. Adrienne, who wrote, directed and starred in the hit film WAITRESS, was killed November 1, 2006. Through the Foundation, her commitment to filmmaking lives on. We've established scholarships, grants, finishing funds, screenwriting fellowships and living stipends at NYU's Tisch School of the Arts/Kanbar Institute of Film; Columbia University; American Film Institute; Women in Film; IFP; the Nantucket Film Festival; the Tribeca Film Institute; and the Sundance Institute. Your generous contribution will go a long way towards helping us achieve this very important mission. Please click here to make a donation. Thank you.
Posted by The Ostroy Report at 1:01 AM

I totally agree! If the Dems do not pass health care reform with a public option they will be dead in the water in 2010. Their supporters will not come out and vote and will not give them any money.

Will the passing of Sen. Kennedy be the motivation they badly need? I say the hell with the Repubs. Get is done and get it done now.

I agree with everything you have said except the release of the Lockerbee perp. We have no say over whether Scotland releases this guy or not. Of course he did not show any mercy to his victims, but should we behave in the same way? They guy is dying. Let Scotland show the mercy the terroists never do. It's their call.

Now that you have clearly received the message, it is time to perceive the facts about a couple of your complaints.

Regarding Abdelbaset Ali Mohmet al-Megrahi, AKA the Lockerbie Libyan: our staunch friends and allies of the UK decided that making an oil deal with Gaddafi was more in their interests than continuing to follow clearly flawed US policy regarding international terrorism. Check out the large and growing opposition of the people of the Commonwealth toward remaining a part of the war in Afghanistan. Check out their media's vocal outrage at the torture revelations. Then compare what you find to the minuscule coverage of the US corporate propaganda machine (see esp: Andrea Mitchell Greenspan defending Dick Cheney just today!) I agree that releasing this terrorist was an outrage, but can we be the ones pointing fingers when our sins are legion and we are avoiding culpability with every twist of the media dial?

Regarding the economic "recovery": only Wall Street is benefiting from what constitutes the declared recovery while Main Street continues to suffer "surprise" increases in first time unemployment claim applications. As you are yourself a New Yorker, I understand how you might have missed this fact. Your late wife's fine movie portrayed people such as those who still suffer out there in Flyoverstan from the predations of the investor class. I'm sure you will soon see the light about this detail once you look into it.

Otherwise, welcome to the Liberal Illuminati. You now know what we know.

Dissapointed by a guy that had no credentials going in?That was annointed by the mainstream media and George Soros and Jeffrey Immelt? How naive!
About the health care reform.We need it.But not this plan that the DEMS are trying to stuff down our throats:
Obama's health care plan was written by a committee whose head man says he doesn't understand it. Passed through by a Congress that hasn't read it, and whose members will be exempt from it. Signed by a president who smokes, funded by a treasury chief who did not pay his taxes, overseen by a surgeon general who is obese, and financed by a country that is broke. Enough said?

On your issue 6. Reagan already proved that trickle down doesn't work. Trickle down recovery doesn't work either. Billions for Wall St, pennies for main st. is just one huge mistake.
No matter which bums you are talking about, you have to start before the primaries to throw them out. It is too late by the general election.

"Former Arkansas Gov. Mike Huckabee the 2008 Republican presidential candidate suggested during his radio show, "The Huckabee Report," on Thursday that, under President Obama's health care plan, Kennedy would have been told to "go home to take pain pills and die" during his last year of life.It was President Obama himself who suggested that seniors who don't have as long to live might want to consider just taking a pain pill instead of getting an expensive operation to cure them," said Huckabee. "Yet when Sen. Kennedy was diagnosed with terminal brain cancer at 77, did he give up on life and go home to take pain pills and die? Of course not......"As it happens, Huckabee made his remarks shortly after he derided Democrats for using Kennedy's death to make the pitch that "Congress must hurry and pass the health care reform bill and do it in his memory,""That not only defies good taste," said Huckabee, "it defies logic."

Totally disagree, I supposed you'd all rather have Bush back... or be back in a Depression.

You're the problem with the Democrats