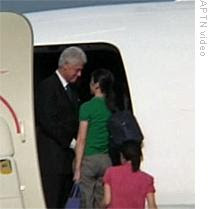 Republicans are downright miserable this week. Why? Because the man they hate so much, their arch-nemesis, the president they once tried to take down even through impeachment and still failed, Bill Clinton, has rubbed his mojo in their collective faces yet again. Riding into N. Korea on his white horse to rescue imprisoned journalists Laura Ling and Euna Lee, His Royal Bubbaness could not have looked anymore like the uber-rock star that he is.

During a brief press conference after her and Lee's arrival back in the United States, Ling recounted how incredible it was to walk through a door and see the former president standing there, clearly indicating that they would finally be going home after three months in captivity.

Watching the clip of Ling's comments, MSNBC's Hardball host Chris Matthews expressed what I believe most Americans feel about Bill Clinton: "Wow..I was caught up in that emotionally. I mean, 'I walk into a room and there he is.' I guess, ya know, Regis Philbin coulda been there and she might have been just as happy, but I don't think so. I mean this seriously, there's something iconic about Big Bill Clinton....The guy is bigger than life." Amen.


On another note, we could use your help at The The Adrienne Shelly Foundation. We're a 501 c 3 tax-exempt, non-profit organization dedicated in my late wife's honor, and with a simple mission: supporting women filmmakers. Adrienne, who wrote, directed and starred in the hit film WAITRESS, was killed November 1, 2006. Through the Foundation, her commitment to filmmaking lives on. We've established scholarships, grants, finishing funds, screenwriting fellowships and living stipends at NYU's Tisch School of the Arts/Kanbar Institute of Film; Columbia University; American Film Institute; Women in Film; IFP; the Nantucket Film Festival; the Tribeca Film Institute; and the Sundance Institute. Your generous contribution will go a long way towards helping us achieve this very important mission. Please click here to make a donation. Thank you.
Posted by The Ostroy Report at 7:53 AM

The Wall Street Journal's take on freeing Americans from decades of hard labor...

...similar to how the CARS program is showing voters the positive effect gov't can have, the GOP media machine's reaction to Bill Clinton's heroic work is reminding voters why they choose Obama in the first place.

It was really a stunning moment, wasn't it? As much as I respect and love Obama, Bill is still that guy on the white horse. His Royal Bubbaness, indeed. He just so completely rocks...

History will have a wonderfully warm and respectful place (forever) for President Clinton; and a remorseful account of a society that allowed an opposition to scapegoat their own insecure frailties on a man that was much more than a great President... and continues to be (forever).

Why were these ladies where they should not have been in the first place? As concerned as you are about how tax dollars are being spent, I cetainly hope that these families receive the proper billing from the US Government. Take the funds out of their book proceeds.