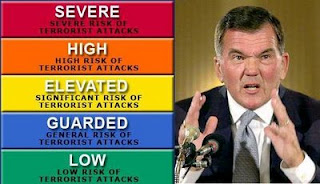 So now it's been officially confirmed: With political gain as the goal, President George W. Bush's administration attempted to elevate the terror alert just days before the 2004 presidential election. The disclosure comes from former Homeland Security Secretary Tom Ridge in his new book, "The Test of Our Times: America Under Siege . . . and How We Can Be Safe Again"

Ridge writes that Attorney General John D. Ashcroft, in reaction to a threatening video released by al Qaeda leader Osama bin Laden on October 29, 2004, "strongly urged" that the threat level be raised just three days prior to the election, and that Defense Secretary Donald H. Rumsfeld concurred with Ashcroft. Ridge claims he vehemently disagreed, suggesting that elevating the threat level on the eve of the election was not warranted and would undermine the administration's credibility.

"The story line advanced by his publisher seemingly to sell copies of the book is nonsense," said Rumsfeld's spokesman.

And former homeland security adviser Fran Townsend: "I’m a little mystified. Never in my experience did I see any political influence exerted on the cabinet secretary."

This is a huge story, but not a surprising one. Anyone with half a brain knew that the Bushies waged its own terror campaign between Sept 11, 2001 and the 2004 election, scaring the bajesus out of Americans by frequently manipulating the threat level to its political advantage. As Associated Press's Ron Fournier wrote in the summer of 2004:

"The politics of terrorism has Democrats tied in knots. Each time President Bush raises fears of a possible attack, the political debate shifts from his most troublesome issue (Iraq) to one of his strongest (the war on terrorism) while Democrats fight their impulse to question the president's motives."

To be sure, as this story unfolds, the criticism of Ridge will intensify. In typical Bushevik fashion, you can bet there'll be harsh attacks and character assassinations, all of which will directly contradict the previous public praise lavished on Ridge:

March 2, 2004: President Bush said Ridge and other officials "are doing a fantastic job of leading this department."

December 1, 2004, the day after Ridge announced his resignation, Bush said: "His efforts have resulted in safer skies, increased border and port security, and enhanced measures to safeguard our critical infrastructure and the American public. In the fight against terrorism, he has played a vital role in protecting the American people from a real and ongoing threat."

That is, of course, until Ridge blew the whistle on his former boss. But his explosive charge is really old news in a way. He's really not telling us anything we didn't already suspect. The Busheviks for eight years abused the power of the presidency, consistently using the White House, the Justice Department and the Attorney General's office, and other levers of government, for political gain. Whether manipulating terror threats, firing U.S. attorneys, or smearing former Ambassador Joe Wilson for example, the Bush/Cheney/Rumsfeld/Ashcroft/Gonzalez cabal zealously and consistently played the politics of fear game. But will any of them ever pay for their misdeeds? Don't hold your breath.


On another note, we could use your help at The The Adrienne Shelly Foundation. We're a 501 c 3 tax-exempt, non-profit organization dedicated in my late wife's honor, and with a simple mission: supporting women filmmakers. Adrienne, who wrote, directed and starred in the hit film WAITRESS, was killed November 1, 2006. Through the Foundation, her commitment to filmmaking lives on. We've established scholarships, grants, finishing funds, screenwriting fellowships and living stipends at NYU's Tisch School of the Arts/Kanbar Institute of Film; Columbia University; American Film Institute; Women in Film; IFP; the Nantucket Film Festival; the Tribeca Film Institute; and the Sundance Institute. Your generous contribution will go a long way towards helping us achieve this very important mission. Please click here to make a donation. Thank you.
Posted by The Ostroy Report at 9:01 PM

So, why didn't Ridge speak up or resign in protest? Same with Powell who sat on what he knew. Now the only one to benefit is Ridge from book sales.

he did resign...a month later.

This doesn't surprise me at all considering we are talking about George Bush.

I am sorry.One more thing:
Show some full disclosure of the facts please
From the Times:
These are the words Ridge used:
He “suspected.”
He “wondered.”
But: Mr. Ridge provides no evidence that politics motivated the discussion.AGAIN:
Mr. Ridge provides no evidence that politics motivated the discussion.
So, either he lied to Lichtblau. Or he’s deliberately exageratting now to create book hype and interest among Bush-hating liberal journalists.
Until now, he has denied politics played a role in threat levels. Asked by Eric Lichtblau of The New York Times if politics ever influenced decisions on threat warnings, he volunteered to take a lie-detector test. “Wire me up,” Mr. Ridge said, according to Mr. Lichtblau’s book, “Bush’s Law.” “Not a chance. Politics played no part.”
Whos making national security politcal?Who?

Who noticed? Who cared? I didn't hear any of these accusations then when it would have helped.

Despite the growing evidence that the Bush administration committed many crimes, Obama isn't about to do anything about a single one of them. In fact, he seems more interested in enhancing and projecting his power much as his predecessor did, so what did We the People gain by electing him? Besides being made liable for mountain ranges of growing government debt, that is?

There is an error in your first paragraph when you state that the terror alert was elevated just days before the 2004 Presidential Election. It was NOT elevated. They discussed it, but in the end, it was NOT raised. The last terror alert leading up to the election was on August 2, 2004, not in November 2004. Perhaps a little more due diligence on your part may be in order......but then we'd have a much duller story, would'nt we?

Anon %:08 (AKA Mr Perfect)...thanks for the catch. I readily admit my many imperfections.
Andy

Chris Mathews,you and Obama.....
you picked the wrong bed

Raising it for no reason is not gonna fly, talking about it was more than enough. The MSM played a pretty big role in all this too.

We have not had any domestic terror problems since 911, I think all Bush did was talk about terrorists, talk about one big smoke screen.

Scared everyone into just doing whatever they were told, spend money and buy an overpriced home, common sense died, and the housing bubble came next.

There was a time when I thought we as a nation would come together. But after seeing the crazy prancing majority white (I am white) protesters this summer against health care reform, I really do not see us ever coming together. We are roting from within. I am embarrassed and ashamed of our country and how it refuses to work together for the common good. We are going to go down together and those prancing white folks will never understand why.