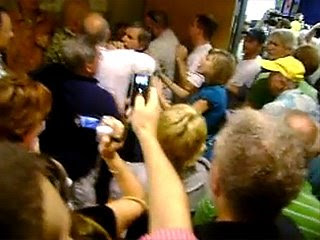 Where have we witnessed this scene before: throngs of angry, belligerent conservative goons disrupting public debate of a heated issue? And where have we seen this tactic before: Republicans trying to frame issues with malicious lies about the opposition and its policies?

Well that's exactly what's happening as President Barack Obama attempts to reform the health care industry to create universal coverage, and as Democratic members of Congress hold "town hall" meetings across the country to explain the program. Hordes of semi-violent demagogues have hijacked these events, shouting down the speakers and even hanging the legislators in effigy. It's shocking and reprehensible.

There's been much controversy surrounding these highly contentious gatherings over the belief that the mobs have been prepped and mobilized by the GOP and/or special interest groups backed by the drug, hospital and insurance industries. While the likelihood is that most are (radio host Sean Hannity's website entices people to "Become a part of the mob! Attend an Obama Care Townhall near you!" and then lists dozens of scheduled meetings), that's not the real issue here.

It's not our business whether the crowds are organized by self-serving, anti-Obama conservative groups. I don't care whether Karl Rove himself packs these people on a bus, provides them scripts, hands them lunch, and personally leads them into the meeting areas. The First Amendment protects free speech, and these people have a right to organize, assemble and speak their minds as they see fit, as long as they do so in a non-disruptive, non-threatening civil manner. But what is of concern is that these self-proclaimed "patriotic Americans" are acting in a bullying and often violent manner, thus stripping the opposition of its right to free speech. It's all very reminiscent of the 2000 "Brooks Brothers" mobs who, under the guise of local protesters but actually official GOP goons, disrupted the Miami re-count in the Bush/Gore post-election battle. These rowdy town hall meetings have been overrun by rabid Republicans acting like brutish mobs with the singular goal of preventing the health care debate from taking place. They seek to shout down and drown out the opposition. And that's not acceptible.

Republicans are very good at lying and deceiving in an effort to bolster their cause and frame the issues. Can we ever forget how Sen. John McCain, Sarah Palin and others did their best to portray Obama as a terrorist, socialist and Muslim? What about the "birthers," who insist that Obama's presidency is not legitimate because they believe he's not a U.S. citizen? These crafty Republicans fear-mongered to get us into war with Iraq, and now they're fear-mongering again on health care, scaring people into thinking that if Obama's reform succeeds, then the government will dictate the who/what/when/where/why of their personal coverage. They're even scaring ailing senior-citizens into thinking they'll be euthanized rather than to spend wasteful taxpayer dollars keeping them alive. This suggestion is beyond despicable, but not a surprise.

So while the health-scare mobs spread their lies and deceptions, let's set the record straight on a few main points of Obama's proposal:

To be sure, the health care issue is extremely complex. Both sides of the aisle are throwing facts and figures around as they try to convince people that they have Americans' best interests at heart. But in cutting through all the muck, there's one very simple, logical question in determining who's lying and who's not: are Republicans really the party that's gonna protect the old, the sick and the uninsured more so than Democrats? Sounds absurd, right? Yet so many people still allow themselves to become brainwashed by the GOP's deceptive rhetoric.

What's most unfortunate in this whole mess is how so many people continue to be used and manipulated by the GOP. They're the same ignorant lot who believe that Obama's a Muslim, that he hangs out with terrorists and that he was born in Kenya. They are the birthers, the tea baggers and now the health scare fools who've been duped yet again, despite almost 100 years of proof to the contrary, that the Republican Party is the party looking out for the little guy.


On another note, we could use your help at The The Adrienne Shelly Foundation. We're a 501 c 3 tax-exempt, non-profit organization dedicated in my late wife's honor, and with a simple mission: supporting women filmmakers. Adrienne, who wrote, directed and starred in the hit film WAITRESS, was killed November 1, 2006. Through the Foundation, her commitment to filmmaking lives on. We've established scholarships, grants, finishing funds, screenwriting fellowships and living stipends at NYU's Tisch School of the Arts/Kanbar Institute of Film; Columbia University; American Film Institute; Women in Film; IFP; the Nantucket Film Festival; the Tribeca Film Institute; and the Sundance Institute. Your generous contribution will go a long way towards helping us achieve this very important mission. Please click here to make a donation. Thank you.
Posted by The Ostroy Report at 7:07 AM

Wow. The fact that we even have to issue denials and 'statements of fact' to clarify the situation means that we may have already lost this one. Hope not.

Reminds me of the (probably apocryphal) LBJ story. He told his manager to find someone to accuse his opponent of being a pigf*er. The campaign manager, aghast, asked LBJ of what proof he had. The response: "Of course there's no proof, I just want to make the sumbitch deny it!"

Let's be honest: This has more to do with accepting the election results of last November than health care reform. I am white and I also think this has more to do with race and whites becoming minority status than anything else.
I sure hope we get the change we voted for. I am disgusted and embarrassed by the white protesters. They do not want answers. They just want to yell and scream. We don't even have a health bill yet and they act like they know what's in it.

the only question i have for consevatives is.....what are you going to do about it ? obama is kicking that butt ! and they can't do nothing about it ! by october,there will be a healthcare overhaul......this whole thing is a brillant move by the obama admistration...because this subject is being talked about....and they hate it.....james lewis norht carolina

It’s funny we hear Republicans say that they do not want “faceless bureaucrats” making medical decisions but they have no problem with “private sector” “faceless bureaucrats” daily declining medical coverage and financially ruining good hard working people. And who says that the “private sector” is always right, do we forget failures like Long-Term Capital, WorldCom, Global Crossing, Enron, Tyco, AIG and Lehman Brothers. Of course the federal government will destroy heathcare by getting involved, Oh but wait, Medicare and Medicaid and our military men and women and the Senate and Congress get the best heathcare in the world, and oh, that’s right, its run by our federal government. I can understand why some may think that the federal government will fail, if you look at the past eight years as a current history, with failures like the financial meltdown and Katrina but the facts is they can and if we support them they will succeed.

How does shouting down to stop the conversation of the healthcare debate at town hall meetings, endears them to anyone. Especially when the organizations that are telling them where to go and what to do and say are Republicans political operatives, not real grassroots. How does shouting someone down or chasing them out like a lynch mob advanced the debate, it does not. So I think the American people will see through all of this and know, like the teabagger, the birthers, these lynch mobs types are just the same, people who have to resort to these tactics because they have no leadership to articulate what they real want. It’s easy to pickup a bus load of people who hate, and that’s all I been seeing, they hate and can’t debate. Too bad.

Andy; I just wanted to let you know that I appreciate your comment, left for me on the Huff. I did respond, but it was scrubbed.At least that seems to be what has happened. I posted an answer an hour ago,and it is yet to appear. Here it is, along with your answer, until it was not;

While I can't speak for HuffPo, I can assure you that I do not reject any comments unless they break the standard rules of civility. Fire away, pal....

This comment is pending approval and won't be displayed until it is approved.

Thanks, but I'll decline. I will continue to read your blogs, as I will others on this site.
It is just too time consuming to post a lengthy response only to have it scrubbed for what is thought to be an "ad hominem"attack, when in fact it is nothing more than a negative view of the either the subject of the blog, mor the person being lampooned.

I just find it too exasperating,and do not respond to it well.

I had one comment scrubbed because I referenced the name of the Physician who tended to Lincoln (Notice I didn't name him) , as a word that could be used to describe the subject of the blogg.
That was the reason told to me by one of the moderators. Too obtuse for me.
Favorite Flag as abusive Posted 12:20 PM on 08/10/2009

This resort to attempted mob rule is scary and reminds me more of the racist / classist anger of Weimar Germany than anything even remotely American. Demonizing Democrats by comparing them (ironically) to Nazis, Recruiting ignorant dupes to disrupt and disrespect free speech? This is far more sinister than the repugnant Brooks Brothers episodes in 2000 - at least those were Party faithful trying to get a job done; these are stooges whipped into a nearly-violent lather about something they don't understand by a netherworld that is not all-too-silently praying for the President's assassination (God forbid!) or a major, successful terrorist attack on US soil.

Shame apparently has no bounds...and just as I was becoming proud to be an American again.

This all may seem to be a circus on the surface, but things may be more serious than they are presented.

I just finished reading Robert Paxton's 1998 work, The Five Stages of Fascism [PDF], and the parallels are frightening. If Paxton's presentation is correct, it explains why the GOP is very comfortable with always saying "NO!" to everything Obama proposes. By demonstrating the government cannot solve the people's problems but the GOP can, it opens the door to more extremist governance which they could then exploit to establish that generation of Republican Rule which they so strongly desire. It may also explains somewhat why Obama appears to be selling out the very programs he promised us. He needs to keep the conservative elites on his side lest they begin to empower the radicals to retain power and control for them.

About the only thing between what remains of our democratic republic and a fascist dictatorship is the fact that the bully boys haven't yet been loosed on those who oppose the continuity of the corporatocrisy. But with the calls to attend the town hall meetings with one's weapons (assuming that one is so licensed - for now!), that particular item is not far away.

I fully agree with Anonymous 10:58This is the reaction of the angry white man. And woman.
But, they are a minority. Just because they fill up the town halls and just because the media treats the rantings of Sarah Palin like a Ph.D. dissertation, the larger picture still remains intact. The majority of Americans, Democrats or Republicans are not like that. Too bad they don't get the exposure that the lunatics do.