The Real Appeal of Ted Kennedy and the Camelot Clan 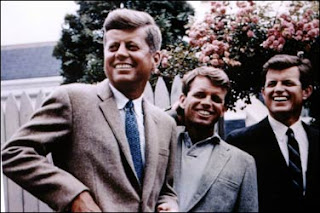 In the wake of Sen. Ted Kennedy's death, I think the one thing that unified Americans in their appreciation and affection for the Kennedys and Teddy in particular perhaps was that, after putting aside the family's vast wealth, they lived and died just like the rest of us. And in that lesson is the painful reality that money can't buy love, health or happiness, or prevent unfathomable horror.

To be sure, the Kennedy clan is America's version of royalty, complete with the queen-like figure in the late matriarchal Rose. But just like Great Britain's royal family, this Camelot had more than its fair share of dysfunction and tragedy. The Kennedy Curse, as it's known.

And all of this melodrama was part of the same initial appeal George W. Bush had with voters. The "he's just like us" factor. It's why people like John McCain, John Kerry and Mitt Romney fail to catch on nationally with voters in the same way. Looking past their vast wealth, there is nothing seemingly humble about their beginnings or the lives that followed. They are largely viewed as privileged, lacking that same connection that the Kennedys made with the common man. Will we ever forget the heartbreaking images of Americans of all ages, religions and races sobbing in grief at the tragic losses of John, Bobby and John Jr. as if these iconic figures were part of their own families?

As the proverb goes, some people are born on 3rd base and think they've hit a triple. The Kennedys always knew they were born there, but never forgot that most everyone else hadn't been. They dedicated their lives to public service, trying to help the little guy reach 3rd even knowing that, no matter how fast he ran, he'd still never hit that triple.

Ted Kennedy's contribution to American culture and society can be seen in virtually every historic issue fought in modern American politics, including health care, social security and medicare, minimum wages, education, immigration, aid for senior citizens, civil rights, voter's rights, women's rights, gay rights and human rights. And he accomplished all this as a gentleman and a respected bi-partisan leader, with civility, graciousness and humor. A larger-than-life Washington character. Sadly, there's no one to step in and fill his shoes....on either side of the aisle.

Ted Kennedy's legacy, and that of his family, is abundantly clear. But more importantly, so are the many reasons he was loved and cherished by so many as a true national treasure.


On another note, we could use your help at The The Adrienne Shelly Foundation. We're a 501 c 3 tax-exempt, non-profit organization dedicated in my late wife's honor, and with a simple mission: supporting women filmmakers. Adrienne, who wrote, directed and starred in the hit film WAITRESS, was killed November 1, 2006. Through the Foundation, her commitment to filmmaking lives on. We've established scholarships, grants, finishing funds, screenwriting fellowships and living stipends at NYU's Tisch School of the Arts/Kanbar Institute of Film; Columbia University; American Film Institute; Women in Film; IFP; the Nantucket Film Festival; the Tribeca Film Institute; and the Sundance Institute. Your generous contribution will go a long way towards helping us achieve this very important mission. Please click here to make a donation. Thank you.
Posted by The Ostroy Report at 10:53 AM

How disgusting is it that the righties are bashing Sen. Kennedy and his body was still warm!!!

Pass health care reform with a public option by 51 votes! The Repubs did the same to us with the Bush tax cuts. This will at least help those who are hurting the most.

i was 17 when jfk was murdered. to this day the thought of his death, memorials, programs, etc, continue to make me emotional. maybe with the years and all the horrors that happened, i can see that more than a president was killed. i can see the hope he brought to the entire world -- including a small village in equatorial west africa, no less -- was also killed. at least ted had a chance to fight for his life and at the end was surrounded by family. \\ born free “those who would give up essential liberty to purchase a little temporary safety deserve neither liberty nor safety.” -- b. franklin, 1759

Unlike Obama, the Kennedys didn't merely talk about hope. They actively pursued its inspiration in people. They talked about those things that hadn't been realized and which they believed could, not the least of which was sponsoring true racial and economic equality - a goal seen back then as being about as impossible as flying to the Moon.

In neither case did Kennedys themselves achieve the goal, but they got the nation moving inexorably toward those goals. They generated so much popular momentum toward these goals that even political opponents could not derail them. LBJ felt compelled to drill the final holes in Jim Crow, and Richard Nixon basked in reflected glory as Neil Armstrong and Buzz Aldrin achieved JFK's Buck Rogers/Flash Gordon fantasy. Neither of these men would have lifted a finger toward achieving these goals if they weren't already set in motion by the Kennedys and which were already demonstrating positive political and economic effects. These men were themselves without vision and too embedded in the status quo.

There are lessons here for the current occupant of the Oval Office. I hope that he changes away from his current passivity and realizes what a leadership opportunity he has been given, one that the Kennedys and many others died for. If he truly honors anything other than wealthy corporate banking executives, he will act - and decisively.

Wow, Andy - you are spot on with your writing, your compassion, your insight. I have just become a fan and everything you say is SO TRUE.
America owes much to the Kennedy family. They have given SO MUCH FOR OUR COUNTRY: Their lives, their work, their devotion to help make America a better country for all- not just the few that seem to realize their good fortune by forgetting many average citizens that make it possible for the privilidged. Rest In Peace Ted Kennedy, you were our LIBERAL LION and we loved you for that.

Andy your blog is THE BEST! Where have I been as I only just discovered you. WOW, Thank-You for sharing your writing talents and heartfelt opinions.
Bless You.
Becky from Westlake, Ohio

11:23: Obama doesn't just talk about hope. It is obvious you don't agree with him.

Obama has a very different Repub Party and country to work with. The current Repub Party is like no party I know. They use to be moderate on social issues and conservative on economic issues.

We are rotting from within. It started with Reagan and is full blown now. Watching those angry prancing ignorant white folks (I am white) at the the townhall meetings is totally disgusting. Now we hear that the Repubs are looking for the next great white hope. Yea, that will really work in a diverse country like ours at they try to win elections on a national level. Those folks are just plain hateful and nuts. They need to go away and shut up.