Drunk and High...and So F***ing Selfish 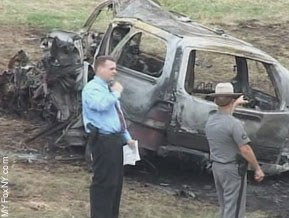 On July 26th, Long Island's Diane Schuler heretofore inexplicably drove a minivan full of children and adults onto the wrong side of the Taconic State Parkway and crashed head-on into an SUV, resulting in Westchester County's worst traffic accident in 75 years. Eight people died in the fiery crash: Schuler, four children, (her own 2-year-old daughter and three nieces), and the SUV's three adult male passengers. Following the crash, there was much speculation that Schuler had become ill, disoriented and had fallen victim to some sort of sudden affliction.

But with Tuesday's toxicology report released, we now know she was simply drunk out of her freakin' skull, high on marijuana, and driving with one hand on the wheel and the other on a bottle of vodka, according to police. Her blood-alcohol level was .19, more than twice the legal limit where someone is considered DWI. Experts said she had the equivalent of 10 shots of 80-proof alcohol in her system.

My heart goes out to Schuler's brother Warren Hence and his wife, whose three young children died so senselessly at the hands of their mind-numbingly selfish aunt. I also feel for Schuler's husband Daniel, who lost his 2-year-old daughter, and will now be raising his 5-year-old son Bryan--the only crash survivor--without a mother.

To say this is a tragedy of epic proportions would still be a gross understatement. There are people who get killed every day through no fault of their own. They are simply at the wrong place at the wrong time. People like those three men in the SUV, and Schuler's tiny passengers. Or innocent bystanders during a robbery. Or people like my late wife, the actor/writer/director ("WAITRESS") Adrienne Shelly, who are brutally murdered by intruders in their homes and offices. These unfortunate souls played no role in their very untimely and undeserving deaths. But Schuler had choices. She knew exactly what she was doing, and fully understood she was putting the lives of so many people in danger. And the choice she made was to get so utterly shitfaced that, for several miles and minutes, she could not even realize she was on a wrong-way death-drive.

I have house in upstate New York. I sat in traffic for almost 4 hours that fateful Sunday--a normally uneventful drive which lets me zip back into Manhattan in 1:40. So I knew something had been terribly wrong. Then the radio reports came in. And then I eventually passed the charred remains of the toppled, mangled minivan. It made me sick. And what also made me sick was the utter senselessness of it all. That it all could've been avoided. That those four beautiful little children, and the three men from Yonkers, could all still be alive today. That a couple from Long Island would not have to attend funerals for their three young daughters.

My wife, and thousands like her, had no choice. Their lives were savagely ripped from them. I know what it feels like to live through horrific death. I also know what it feels like to raise a 2-year-old by myself. But what I don't know is why people continue to make stupid, irresponsible and selfish choices that bring on such horror and cause death to so many. I suppose I will never understand.


On another note, we could use your help at The The Adrienne Shelly Foundation. We're a 501 c 3 tax-exempt, non-profit organization dedicated in my late wife's honor, and with a simple mission: supporting women filmmakers. Adrienne, who wrote, directed and starred in the hit film WAITRESS, was killed November 1, 2006. Through the Foundation, her commitment to filmmaking lives on. We've established scholarships, grants, finishing funds, screenwriting fellowships and living stipends at NYU's Tisch School of the Arts/Kanbar Institute of Film; Columbia University; American Film Institute; Women in Film; IFP; the Nantucket Film Festival; the Tribeca Film Institute; and the Sundance Institute. Your generous contribution will go a long way towards helping us achieve this very important mission. Please click here to make a donation. Thank you.
Posted by The Ostroy Report at 7:11 AM

Speaking of stupid, irresponsible and selfish choices, think of a war of choice that has now been carried out by two administrations that has lead to the SENSLESS MURDER of 1.2 million Iraqis and 100,000 Afghans. Are we americans so comfortable and indifferent to death that we shrug off the murders and violence committed in our name. Eight people died in Long Island due to a selfish act. In Pakistan our drones have MURDERED over one thousand civilians in another useless and senseless act. I hope our compassion and anger will be willing to take actions against both events.

I'm not sure why you are highjacking this man blog to talk abotu the war. I agree with you fully but this guy is talking about a different thing all together. Have some respect for the topic...

SUe the ALCOHOL CAMPANIES Like You did TOBACCO,And put a 2.00 per drink TAX on EVery Beer,drink,shot,Bottle,Can,And SO on...BOOZE KILLS and Pays Nothing Like a SMOKER PAYS,Who may by the way only harm themselves

My gut feeling is this woman had been taking selective serotonin reuptake inhibitors. These drugs cause mega violence in a small proportion of users. The most dangerous episodes occur when the user is just beginning or ending the regimen. Thus it is possible this woman may have no trace of these drugs in her system and still be suffering the effects of their use.

Its beginning to look like the ONLY reason you write stories like this is to mention you know "how they feel". It would be better if you just wrote a tribute to your wife every once in a while. This just seems like exploitation. I know I will get attacked for this, but I think deep down you know my point, so Im ready for the attacks.

Hey John, thanks for the concern about my late wife. I would hope that somehow she's aware that you are looking for her as I shamelessly exploit her.

Two thoughts: when your wife gets brutally murdered, you can decide how much you want to talk and write about it; and, when you have your own blog, you can also decide what you want to write and when. Until then, if you don't appreciate how or what I write, you're free to not to read...

John, no offense, but have you thought of not reading the posts if they bother you so? Frankly, having dealt with many deaths in my own family, I too find a thread of relevance to each and every loss of life. Death can affect us profoundly, and the fact that Mr. Ostroy reaches out to us and speaks of his grief and loss says a lot about his character - and your impatience at this says a lot about yours.

If I had my druthers, I'd say that Andy's musings are far, far more interesting than you and your comment could ever attain to be.

Andy, you have seen and will continue to see things in a different light forever--especially when you look at your son, perhaps.

Thank you for reminding us, however painful it is for you to do so, how our actions send out ripples into the world--ripples that we often never see or intend.

Perhaps 'John' has yet to experience ripples that have affected him as closely or as dearly as some have affected you. Pray God that he doesn't have to!

Thanks for your insight--despite the pain such introspection causes.

This case raises a lot of questions. Did this woman have a history of drinking? Didn't she call at one point to say she was "disoriented?" Was she on medications? Could she have been slipped something, or could something else have gone wrong? She just didn't seem like a drunk driver type.

I hope there will be a serious and comprehensive medical examination and police enquiry. Something here just doesn't add up.

But my very sincere condolences to those who lost their loved ones in this terrible incident.

John sucks. Probably drunk and tokin' on a doobie right now behind the wheel of an automobile aiming at oncoming traffic. Shame on you, John.