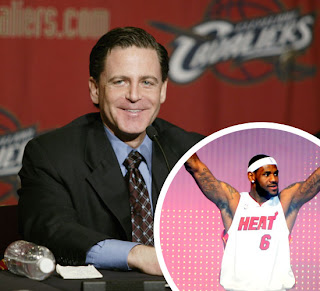 Kudos to Cleveland Cavaliers owner Dan Gilbert for showing some balls and standing up for his team, the fans, the game of basketball and the sports industry overall. Finally, someone in a position of power put a spotlight on the increasingly offensive and unprofessional behavior of professional athletes. It's been long overdue.

Go ahead, call me an old man at 50, but I remember the days when fans were awed and inspired by athletes. When we shared their sense of pride and love of whatever game they played. They were heroes back then, not grandstanding, foul-mouthed, steroid-addicted, immature, over-paid ego-maniacs. Outside of the rare scandal (remember the salacious Mike Kekich/Fritz Peterson wife swap of the '73 Yankees?), ballplayers played the game with respect, integrity, a sense of responsibility and team loyalty.

Fault not Lebron James for leaving his beloved Ohio for the constant sun, fake boobs, low taxes and potential NBA championship in Miami. Basketball today, like all sports, is big business...and he's a 25-year-old red-blooded American male who, along with his pals and new teammates Dwyane Wade and Chris Bosh, is gonna tear up that town and save an extra $10-million. Can ya blame him? But we can put James on our eternal shit-list for how he handled his departure from the only burg he's known, and which gave him his start and his eventual throne as King James.

Lebron didn't even have the decency to provide advance notice to Gilbert. Instead, as the angry owner wrote in a scathing, well-earned public excoriation of his former star, James staged a "narcissistic" ESPN circus--complete with his own paid interviewer, Jim Gray--and literally left Gilbert to find out about Lebron's decision at the same time as I did. And I did absolutely nothing for the King these past seven years.

So yes, thank you Dan Gilbert, for calling James out on his self-aggrandizing, time-wasting slap in the face of Cleveland and sports fans everywhere. Thank you for feeling such visceral disgust that you felt compelled to write your open letter to your heartbroken fans in which you branded James as shameful, selfish and cowardly.

But I'd like to take Gilbert's rant a step further. Personally, I'm sick of all the showboating, arrogance and low-class behavior of athletes in general. I want football players to stop dancing like MC Hammer every time they score a touchdown. I want basketball players to stop angrily screaming "muthafucka" and looking like they could kill someone whenever they block a shot or dunk the ball (are you listening, Kevin Garnett et al?). I want athletes to stop jumping in the stands to fight with fans. I want them to stop juicing themselves to the point of physical absurdity. Is that too much to ask?

In the wake of the NBA's free-agent frenzy, Lebron's behavior just gave folks like me religion; a reason to devoutly root for the Heat's colossal failure. As a die-hard Knicks fan, I congratulate Miami for taking over the top spot from Boston on the teams-I-hate list. As for Lebron, he'll go to Miami, he'll make gazillions, and he may, just may--if he, Wade and Bosh can check their egos and shooting obsessions at the door--win an NBA title someday. But what he lost last week he will never get back: respect and adulation from the fans.

I think anyone watching this knows that it is more than just a coincidence that the top three free agents ended up in the same place and that all of those complex pieces miracly came together within a week of the time deals could be made.

This really needs a serious league investigation and should not be allowed to go forward before it is completed.

Another important point here is that there needs to be adjustments to the salary cap computations. If the goal is that talent doesn't go to the team who can pay the most so that certain teams have financial hammers to skew the talent allocation, then there needs to be some sort of equalization computation going on.

To simply say that $20 million is the max a franchise can pay a guy each year and it can spend no more than $95 million or less than $75 million is bound to result in inequalities based upon the obvious circumstances applicable to each franchise.

Hence Florida and Texas team have a $13% edge over New York City teams before further factoring into account the much higher cost of real estate and living. Thus, the salary cap approach doesn't put the Knicks, Nets and other major market teams on the same footing as others whereas before they had a financial leg up. It actually puts them BEHIND.

Equalization calculations are simple and done in business all the time. Heck, even the government makes those calcs for their own employees. I know a Federal law enforcement person who, when transferred from NY to Georgia actually had their pay cut.

Here, I think it's pretty obvious what happened. These three guys figured that where ever they went, they'd be the nucleus of a dominant team and so they went to the place where one of them played where there is no state income tax.

Florida, New York, Ohio - a guy like James will make a ton of money whichever place he lands. Remember, the NBA is a national game and Michael Jordan got mega wealthy outside of the NY market.

But collusion amongst players which clearly happened here is something that should not be tolerated. Stern should investigate and if he finds the obvious elephant in the room, he should cancel all contracts and make each player free agents with the proviso that they (a) can't sign together anywhere and (b) none can sign with the Heat.

Don't blame LeBron James. You can't have a media circus without the media, and the media only cover it because the viewers tune in. If you learned of James' decision at the same time as Gilbert, it's because you were among those who watched the telecast - which makes you part of the problem and leaves you no room to complain about it.

Have you stopped to wonder how much ESPN paid LeBron for the exclusive rights to live coverage of his announcement, and whether they insisted on secrecy to preserve their scoop? Do you think for a moment that if James had informed Gilbert in advance, word would not have leaked out from the Cavaliers' camp and spoiled the surprise? Pro ball is indeed big business, and you can't blame the players for acting accordingly.

Gilbert, for his part, acted like a jilted fourteen-year-old, and I expect he will look back on his outburst with not a little embarrassment in years to come.

As for the over-the-top celebrations by athletes: when that many people engage in a particular behavior, you have to look for a systemic cause. Have you watched ESPN or seen any sports video games lately? The media glorify that kind of self-aggrandizement, and kids grow up thinking it's how they're supposed to act. As ugly and narcissistic as it appears to old fogies like you and me, it's part of today's culture; and it will continue until the culture changes.

Detroit loves Dan Gilbert. He lives in the Metro Detroit area even though he owns the Cavs. He owns Quicken Loans too and has just announced that he is moving his headquarters which means employees to downtown Detroit. You have no idea how much this will help the city.

Dan is right about Lebron too.

Ostroy, when did you become a corporate lackey? Your backing this bonehead Gilbert? Do you understand he has no concers about Cleveland or winning or even basketball. He is a businessman...he purchased the team for $375 Million...Lebron doubled that investment the minute he stepped on the court! The businessman reportedly has lost 50% of his franchises net value, the minute "King James" made his annoucement. Oh poor Dan Gilbert...he lost millions, god forbid!

Lebron James does not owe anyone anything! If anything, Dan Gilbert owes him his gratitude for opting to play 7 years in a small market like Clevaland. He put the Cavs on the map. He sold out the arena night in and night out. He single handedly took them to the finals, something Price, Daughtery, Nance, Ehlo and Hot Rod Williams, could never accomplish!

Gilbert did nothing to increase the value of that team and like every other corporation in this country, he expected his workers to shut up, perform and produce, all for his bottom line. Let me quote Jesse Jackson, “Those engaged in this public arena must look upon workers with respect and shared dignity.”

Ostroy, stop being a bitter Knick fan, who didn't get Lebron. I am a life long suffering Knick fan myself. I am not upset at Lebron. Be upset with management...James Dolan is a bigger idiot than Dan Gilbert!

The truth is, Gilbert enabled Lebron for seven years, allowing him to basically do whatever he wanted. He allowed Lebron's posse unrestricted access, shitcanned the coach and ignored his GM's warnings to rein shit in.

And now he expects Lebron to play like a man?