Here's the Campaign Speech Obama Should Be Giving to Help Democrats 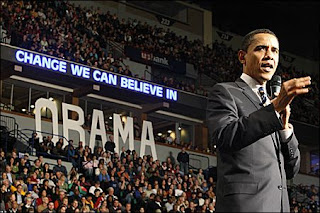 There's just 104 days left until November's Congressional midterm elections. Not a lot of time in the world of politics, especially, as many pundits argue, most voters' minds are made up as they take that last bite of July 4th BBQ. As such, President Obama needs to immediately shift gears and start aggressively touting the major, unprecedented accomplishments of his administration and Democrats before it's too late. And he needs to point out the unprecedented obstructionism of Republicans. He needs to do it all in a clear, concise, soundbite-effective manner that the poor, the middle class and independents can quickly comprehend. And he must do it without all the usual Democratic parsing, nuancing and over-intellectualized explanations. I suggest the following speech:

"My fellow Americans. Today I want to talk with you about what I call The Great Lie, which I will explain in a few moments. In just four short months you will be faced with a very important decision. A decision that will have significant consequences in terms of the overall direction of our great nation with regard to how your government is run. It is a very, very critical decision in terms of your jobs, your savings, your investments, your taxes, your health, your children's education and the environment. It is not a decision you should take lightly.

The United States is still reeling from the worst financial crisis in 80 years. There are over 14-million unemployed Americans today, and we must return them to the workforce quickly and with good paying, quality jobs. Make no mistake, I understand the pain and hardship that you and your families are experiencing, and I understand the huge challenges to businesses as well. That is precisely why how you vote in November can be the difference between continuing on our road to recovery, or sending the country back into an economic tailspin not seen since the Great Depression. Which is why when you enter that voting booth on November 2nd and close that curtain you must vote for Democrats and keep Democrats in power.

Now let's get to The Great Lie. The Great Lie is this: the Republican Party wants you to believe that the sky is falling and that America is failing. Republicans are trying to convince you that the country is in worse shape than when I became president in January 2009. And it's all because of this big bad Bogeyman they call "big government." But let me tell you this: nothing could be further from the truth.

When I took office America was losing 700,000 jobs per month. We now have five straight months of job growth. When I took office, some of the country's largest industries--financial and banking, airline, retail, housing and automobile--were on the verge of collapse. Today they experience growing sales and record profits. When I took office the GDP--which measures the nation's total output--was shrinking by an annual rate of 6%. This year we're growing at about 3%. That's a 9% swing to the positive. When I took office, consumer confidence and spending were at record lows. Each one of you is a consumer. And as consumers, you are spending more today and are feeling much better about the economy than you did when I took office. But let me be clear. You are still struggling. America is struggling. And we still have a long way to go back to prosperity. But whatever you do, however you feel in this struggle, do not let Republicans tell you that your government is failing and that we are in worse shape than January 2009. You know this is not true. Don't fall for Republican lies.

Now let's explore this thing called "big government." Back in 1863 Abraham Lincoln delivered his brilliant Gettysburg Address. In it he spoke of "government of the people, by the people, for the people." My fellow Americans, there is no big government...only your government. You pay taxes, and government, your government, owes you something in return. It owes you the promise that it will help you when you're down and in need, and it owes you the assurance that it will intervene and help prop up the economy when grave circumstances threaten your well-being. It does not have the right, as the Republicans would love, to turn its back on you and represent only the wealthy and big corporate interests. Remember, "government of the people, by the people, for the people..."

Let's talk about the environment for a second. Remember Texas Rep. Joe Barton, the guy who apologized to BP because we urged them to put $20-billion into an account to pay workers and businesses affected by the disastrous oil spill...the worst environmental crisis this nation has ever faced? Well, as the ranking Republican on the Energy and Commerce Committee, Rep. Barton would become chairman if Republicans won a majority in November. That's right, the guy who apologized to BP would now be the guy in charge of the House committee that oversees America's environmental policies. The proverbial fox would be guarding the hen house. This is just another reason why you must vote Democratic in November.

Are ya with me so far? Do you see how these things are important to you? How your government, Democrat-led government, not big government, is helping you and protecting your interests? Well here's another interesting thing about The Great Lie: Republicans have done absolutely nothing to help you. Not one single solitary thing. All they've done is vote against everything I've mentioned to you here today. While my administration and Democrats in power have given you better health care, greater financial security and protection, increased jobs and concern over the environment, Republicans have voted against every one of these measures. Not one Republican voted for our stimulus plan. Only one Republican voted for health care reform bill. And just three Republicans voted for our financial reform bill. And when your government, run by Democrats, wanted to extend unemployment benefits for those of you out of work, Republicans again voted against helping you. Since I took office, as Democrats have said "yes" to helping the poor, the middle class, small businesses, the unemployed...Republicans have repeatedly said "no." "No" to helping secure your jobs and creating new ones for the unemployed. "No" to helping you obtain better, cheaper health insurance. "No" to stopping the reckless trading on Wall Street that created our economic crisis and jeopardized your savings and investments. No, no, no, no, no. That's what you can expect more of if you vote Republican in November.

Ya know what else Republicans don't tell you as part of The Great Lie? They don't tell you that they really don't care about you. They don't tell you that all they care about are the wealthiest Americans and their big corporate pals. They don't tell you that their main priority is to keep more of their income by paying less and less taxes. When they say "no more big government" what they're really saying is "no more of MY money going to help the poor, the middle class and small businesses." They are doing everything in their power to convince you that "big government" is bad for you. But you tell me, America, is better health insurance bad for you? Is job creation and job security bad for you? Is being able to buy a home bad for you? Is seeing your home's value rise bad for you? Is reigning in dangerous Wall Street trading activity bad for you? Is extending unemployment benefits bad for you? If it is, then maybe I'm wrong here. Maybe you should vote Republican in November, because Republicans will take away all of these benefits your Democrat-led government is working overtime to give you. They will take away health care so that they can make their rich insurance, medical and pharmaceutical industry pals happy. They will take away financial reform so they can make their rich Wall Street pals happy. And they will leave you again exactly where they left you before I took office: out in the cold, on your own, with no government to help you. Your government will become their government. A government that is not "of the people, by the people, for the people"...but only for some of the people. A government for the rich and the privileged.

Don't let Republicans get away with The Great Lie. The "big government" Bogeyman is just a tactic for Republicans to scare you into voting against your own interests in November. Remember, how you vote will decide how your government serves you. Vote for the party that works hard to improve your lives, not the party says "no" to everything you need. Vote for Democrats on November 2nd, and keep America moving in the right direction for you. Thank you and God Bless America."
Posted by The Ostroy Report at 7:25 AM