What Lebron's Decision Says About Lebron 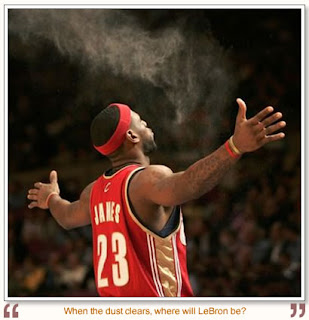 They booed him in New York, they burned his jerseys in Cleveland and they went berserk with glee in South Beach. In the TV circus that was the Lebron James "Decision" show Thursday night on ESPN, the 25-year-old basketball phenom announced his long-awaited, more-dramatic-than-a-soap-opera choice of where he'll be playing this Fall: the Miami Heat. And this surprising decision tells us an awful lot about James and how he feels about himself, or more so, how he doesn't.

The second-coming of Michael Jordan has curiously chosen instead to be the second fiddle of Dwayne Wade, the Heat's one-man offensive machine who'll now also be joined by former Toronto all-star forward Chris Bosh (Gotta hand it to Miami president Pat Riley for bagging the top three free agents of all time). But as anyone with an ounce of basketball knowledge will tell you, Wade is not going to change his style of play for Lebron. It's his team, his town ("Wade County") and his game. Which begs the question, why on Earth would James take a back seat to Wade?

The truth is, James, who was feeling the pressure to live up to the "the greatest of all time" label, does not see himself the way fans or the media does. He does not believe he's the caliber of player of Jordan and Kobe Bryant, who've won six and five NBA championships respectively. His decision to cede top-dog status to Wade is a de facto admission that he cannot carry a team and win it all on his back; that he's not "the man" like Jordan and Kobe, and now clearly, Wade. But while he says he'd rather be a Magic Johnson than a Jordan, can we really believe him? Will he really thrive as Wade's second banana? Will he really be ok with Wade getting the ball in the key final seconds of a critical game? Will the "Miami Thrice," as they're now being called, truly jive as a team--the way the Celtics' stars Paul Pierce, Ray Allan and Kevin Garnett do--and deliver instant, dynasty-level championship success, which is what everyone expects from this half-billion-dollar megastar collective? Will Riley, who now needs to sign eight more players under minimum-salary contracts, be able to attract quality support players or is the Heat destined to be a trio of disappointingly over-talented ball-grabbing egomaniacs who never bring home the trophy? To be sure, there's gonna be more pressure on this Dream Team to win, win quickly, and win big than on any other team in professional sports history.

In an open letter to fans, Cleveland Cavaliers owner Dan Gilbert wrote about James' departure this way: "This was announced with a several day, narcissistic, self-promotional build-up culminating with a national TV special of his decision unlike anything ever witnessed in the history of sports and probably the history of entertainment." Gilbert's right. The event screamed, "Me, me, me." It was not the action of a humble superstar ready to run the floor in Wade's shadow. And that could be a foreshadowing of what's to come from King James in Miami more than than anything else.
Posted by The Ostroy Report at 7:56 AM

There is one university basketball coach that is very happy he didn't switch to pro coaching at Cleveland. His name is Tom Izzo who is the coach at Michigan State University. He was courted to be the new coach at Cleveland. He has to have a big smile on his face now.

Dan Gilbert is yet another luck-of-the-draw mortgage slimeball.

Bought a basketball team for fun but couldn't build a team around Lebron James.

But the real problem is you Cleveland nut jobs who worship a corporate employee who bounces a ball. The NBA is a business.

This typo-laden Comic Sans goofiness is the height of corporate venality and personal vanity.
http://www.nba.com/cavaliers/news/gilbert_letter_100708.html

go back to writing political columns or blogs. First of all, "...his long-awaited, more-dramatic-than-a-soap-opera choice of where he'll be playing this Fall: the Miami Heat," this was created by the media, people like you, who cover the sports world. He took advantage of all the hype to raise reportedly millions for the Boys & Girls Club of America (as reported by The Huffington Post). What an egotistical and selfish move on his part!

As for not being Michael Jordan or(Kobe?)...a statement like that shows you know nothing about basketball, especially the NBA. No one can compare to Michael Jordan...moreover, Jordan needed Pippen to beat the "Bad Boys." Pippen is considered one of the 50 greatest players ever...possibly the greatest small foraward ever.

Kobe? Why is he even in the conversation? His first 3 championships were one with arguably the greatest center ever and the greatest center of his time. His name is Shaq! Kobe did nothing with this team after he forced the Laker's to trade Shaq. He then needed the Laker organization to get him Paul Gasol (best all around center in the game now)and Ron Artest (one of the best defenders in the game right now). Basically a superteam was created for him to win his last 2 championships. He did nothing on his own! Moreover, he needed the worst NBA officiating ever to win Game 7 of this years Finals.

If Lebron compares his game to Magic Johnson, as oppose to Michael Jordan, it shows he understands his talents and basketball. He is an all round player. He scores, passes, rebounds and plays defense. He does it all...these talents will now flourish to greater heights, now that he has weapons in Wade and Bosh, that cannot be stopped. This team will be impossible to double or triple team a player! Something he has never had in the 7 years with Cleveland. There is a reason why he struggled against the Celtics this past offseason. Look at the highlights, he was doubled and tripled team on every play, with absolutely no reliable help stepping up!

Please don't start sentences off with the "truth is"...the truth is your not Lebron!


Everyone can say he is an egomaniac and selfish or afraid to do it on his own. He asked Bosh to come to Cleveland, along with other possible future free agents, everyone refused, big surprise! This idiot owner, Gilbert, is now bitter about Lebron leaving, he couldn't attract or build a team around Lebron. He is the one who failed! Moreover, him acting like he gives a damn about Cleveland is a joke...the owner is bitter because he just lost out on gauranteed millions (possibly billion) for five years! It's nice to see a big corporation not get their way sometime. What is better is seeing them cry about it, greedy pig!

Tell me something, if you were 25 and you had the option to be in Cleveland, NY or South Beach, what would you choose?

I am amazed that David Stern sat there like a lox and let this shameful display go on.

It is clear that the three guys colluded with one another to go to Miami. Both Bosh and James left tens of millions on the table by jumping to Miami without even a sign and trade - that's at least $40 million EACH since they can't get the 7 year deal from a new team that they could get from their old team.

All three said they wanted to play together at the Olympics and miracle of miracle it happens. James left $80 million on the table the last time he signed for three yars with the Cavs at max salary instead of the 7 years he could have taken. Why? Who leaves that kind of money on the table when injury can wipe it all out?

Now if owners collude - say for example - they agree to allocate free agents among them and decline to make maximum offers, the players will sue and the owners will lose. But when the players do it, it's okay?

Makes no sense to me. David Stern should grow some cujones and stand up and block the Bosh/James contracts. They are the product of collusion.

Never mind they wave their rhetorical wand that players local taxes for "away" games, and Peggy Noonan-like refuse to support their rhetoric with numbers...

Never mind they have no W/L or championship analysis relating to local taxes, just more Noonan-like rhetoric with out numerical support...

Never mind all those other players who choose higher state (and federal taxes) in the NBA, and every other pro sport...

Never mind that every investment book every written says not to make taxes your driving decision...

Never mind that the WSJ itself hasn't decamped to Bermuda, Nevada or another tax-free haven...

The Wall Street journal opinion page, the queen of sophistry. So easy to shred.