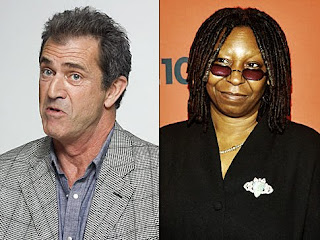 Whoopi Goldberg's on a mission. The Johnny Cochran of "The View" barked Thursday that new allegations of tampering should cast doubt on the validity of the now-infamous Mel Gibson tapes. That's four straight days of nationally televised defense of her racist, homophobic, anti-Semitic, misogynistic, spousal-abusing, drunken Hollywood pal.

What Goldberg is doing is utterly despicable. She's attempting to turn Gibson into the victim and Oksana Grigorieva, his ex, into the abuser. She wants to know why the tapes we're edited, and if that could prove Mad Mel's innocence. She asks why Grigorieva didn't simply hang up. Or call the police. Or exercise some other rational option.

Goldberg is ignoring decades of research and studies that show that battered women live in mortal fear of their abusers and don't think the same rational, logical, practical way that the rest of us do. That's why they often continue to be abused, because it's not easy for them to simply walk away or stand up for themselves. Whoopie's smug over-intellectualizing of Grigorieva's situation demonstrates supreme arrogance, ignorance and insensitivity.

To be sure, Grigorieva taped those calls and released the tapes for two reasons: fear and revenge. Fear over her life and that of her children, and revenge against her obviously verbally and physically abusive tormentor. Is it so hard to understand why this woman wanted the world to hear Gibson's vile, enraged rants against her? So hard to comprehend why she'd publicly go on the offensive like this? Is it difficult to understand that after allegedly being socked in the face, while holding their baby, she was terrified of being killed by this controlling monster?

Calling the cops, as Whoopie suggested, doesn't always work. It didn't work for Nicole Brown Simpson. Didn't stop O.J. from practically decapitating her in a fit of violent, drug-induced rage. Maybe had she showed the entire world what a dangerous, abusive asshole Simpson was, the way Grigorieva now has with Gibson, she'd still be alive.
Posted by The Ostroy Report at 8:48 PM

Agreed. Mel Gibson is a horrible pig of a man. He should be in jail. Besides his anti-Jewish and other racist remarks, he is a violent man and domestic violence is a horrible thing for women to have to live with. Shame on you Whoopi-- Mel is a scumbag and I have lost all respect for you for defending this pig of a man.

David Brooks says it's all because of global drift towards narcissism...

...well, not the global, maybe a national drift of all those overly-proud black athletes on TV high fiving each other...

...well, not national, just one guy, who co-right-wing blather bot Krauthammer has diagnosed as the the high-fiving Narcissist-in-Chief.

The selective modesty of Barack Obama

So as any arm-chair psychologist can tell you, all the dots connect back to Obama.

Get ready for the "narcissist" team at the upcoming GOP media machine ad agency pitch meetings.

One has to wonder if Whoopie secretly admires dominant men.