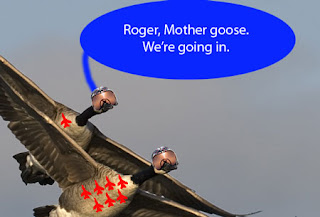 There's something very wrong with society when a court sets a child rapist free while 400 law-abiding geese receive a death sentence and are summarily executed.

This bizarre travesty of justice occurred Monday as Switzerland announced that it would not extradite filmmaker Roman Polanski to the United States to face charges stemming from his 1977 statutory rape of a 13-year-old, just days after U.S authorities gassed to death the birds for air safety purposes. Seems the entire species has gotten a pretty bad rap in the wake of January 2009's Hudson River emergency landing of US Airways flight 1549.

The poor geese were secretly yanked out of Prospect Park, Brooklyn last Thursday, six miles from LaGuardia Airport, where the ill-fated plane, captained by folk hero Sully Sullenberger, took off minutes before flying into a gaggle of kamikaze geese, destroying both engines.

I'm not exactly sure what the government has in mind going forward, but perhaps its ultimate plan is to kill off every goose within miles of every airport in America. Memo to geese: if you live near one, this might be a great time to start packing.

And regarding Polanski, that repugnant little pervert, it's become painfully clear that the Swiss are much better at making cheese than they are judicial decisions. Prosecutors in Los Angeles will now have to decide whether or not to continue their inept 32-year pursuit of him now that it appears he'll continue living unfettered in France. Sadly, the 400 geese weren't so lucky.

By the way, anyone interested in learning why this criminal piece of garbage should someday face trial can read my blogs from 9/29/09 and 9/30/09
Posted by The Ostroy Report at 10:22 PM

Andy - you realize that the main reason the Swiss chose not to extradite Polanski is because the prosecutors back in the US refused to tell them whether Polanski had completed his prison term prior to fleeing in the 1970s. He served 47 days in an institution while waiting to be sentenced, then released and awaited formal sentencing. There was a deal on the table that the 47 days would be considered the full sentence (crazy, perhaps). After the gov't intimated that they might be seeking a longer term at the sentencing, Polanski fled. The Swiss said that they wouldn't extradite to the US if his sentence was completed. The US would not release the materials to the Swiss to give them that info. SO given the uncertainty, the Swiss didn't extradite. It's not clear why the US wouldn't release the info. Of course, he would likely have had a longer sentence now because he fled. CB