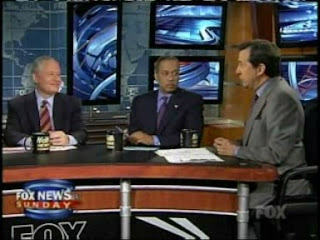 An interesting observation was made while watching Fox News Sunday with Chris Wallace. As usual, the second half's expert panel was mostly Republican, comprised of conservatives Bill Kristol of The Weekly Standard; Liz Cheney, daughter of former Veep Darth Vader; and of course, the host himself. The left was held up by Juan Williams, who always tries his valiant best despite often being drowned out by the right-wingers.

When the panel discussed issues pertaining to the economy, jobs, health care reform, entitlement programs and taxes, they came at it all with the usual rhetoric which reinforces the partisan propaganda about how it's the rich who start businesses, create jobs and drive the economy....while liberals just want to give away the store to the have-nots at the expense of the haves through more government hand-outs. Why can't everyone just pull themselves up by their own bootstraps and make their own way?, is the common Republican refrain. No free lunches!

But what the children of privilege like Wallace, Kristol and Cheney so arrogantly and cavalierly ignore is that their prominent careers are built on the foundation of nepotism....that good old fashioned tradition of rich mommy and daddy giving you that first big break.

And that's the whole point. 99% of Americans don't have wealthy parents who can give them a start. They don't have a former U.S. vice president dad to help get them exposed and primed for a prominent job as a political analyst. They don't have a "Godfather of Neoconservative" and Commentary Magazine editor dad who helped pave the way for their coveted political and publishing positions. They don't have a 60 Minutes-famous pop who can open the kind of broadcast news doors that the average journalism student can only dream of. And that's why they can be so smug, so insensitive and in such denial. They're the kids who were born on 3rd base and think they hit a triple.

The truth is, most Americans do have to fend for themselves in this ravaged economy and ever-competitive jobs market. They don't have rich parents to fall back on. There's no security blanket. No cushion. In fact, for many Americans, all they have is the government. That's their rich mommy and daddy. That's who they go to when they need a start. Need a loan. Need help. Or when they crash and burn and have nowhere else to turn. It's easy for the famous last-named Cheneys, Kristols and Wallaces of the world to sanctimoniously lecture the rest of us on what it means to be independent and self-sufficient when they had their own privileged, elitist version of big government handouts......the family kind.
Posted by The Ostroy Report at 7:07 AM

Ahhh, there but for the grace of God go I.....
My father built up his wealth doing the bidding of those right wingers; Al D'Amato, Ben Gilman and the like during the 70's... As a private detective he helped dirty tricksters Dick and Spiro cut the voter rolls through bogus challenges and what is now known as vote caging. His former State Trooper commander boss was arrested and did time for accessing the early State Police computerized data base for some of these dirty tricks.
Those were the days of gentleman and clambakes; the politicians look so quaint when compared to what has replaced them in the Republican party... they actually did some good... for patrons.
I was being groomed for a future of public service... until post Reagan first term I realized the only ones getting service were the servants on the public dime. When I spoke up, all dads support stopped and his authoritarian heel came down, I could do no right.
While I suffer with multiple disabilities from working the labor jobs of transportation that they built up in Orange County, living in the section 8 housing as the multiple surgeries have caused me to lose six long term jobs in twenty five years; I can at least have the satisfaction of knowing that I spoke up, took my consequences and am here to testify that blind faith and human loyalty are stronger than many family bonds.

And, in some cases, what the wealthy have in nepotism the poor have in affirmative action.