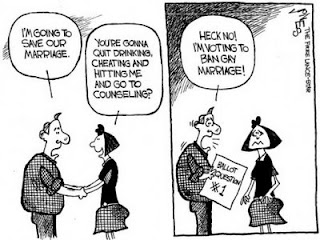 In the wake of the overturning of California's Prop 8 ban on same sex marriage, you terrified straight folks are once again regurgitating the old homophobic propaganda that gay marriage threatens the great institution of "natural" heterosexual marriage. You know, the kind that Mel Gibson, O.J. Simpson, Robert Blake, Joey Buttafuoco, Klaus von Bulow, Newt Gingrich, Mark Sanford, John Edwards and countless others have been so respectful of.

Of course, nothing could be as ridiculous and unfounded as this threat, which is based on ignorance and self-hatred. I'm sorry, but two gay dudes could literally be fisting each other on my front lawn while blasting Liza Minelli and it still won't threaten my straight relationship in any way. If you truly think it'll threaten yours then perhaps you're not as straight as you think you are. Maybe you actually want some of that gay action, and rather than be honest with yourself about who you really are, you amp up the testosterone and lash out at those who are living truthfully.

Listen, heteros, just what the hell are you so afraid of anyway? Why does it bother you so much...why does it arouse so much anger and passion... at the thought of two gay people in love who wish to marry? Do you think preventing gays from marrying will make homosexuality go away? Do you think preventing same sex marriages will end same sex relationships? Are you paranoid that a roving, predatory, wedding-banded rainbow-cock will come flying into your unsuspecting manly-man mouth if you walk down a street full of married gays? This issue is about human rights. Civil rights. Peace, love and happiness. So how about you just chill the fuck out and live your life and let gays live theirs?

All you petrified straights should get used to the idea that gays and gay marriage aren't going away. You should finally show some decency, respect and appreciation for our gay friends, as they are part of America's fabric. They stand beside you as they fight your wars, teach your kids, care for your sick elders, protect your homes, fight your fires, pay your salaries, do your taxes and more. They love this country just as you do, and they deserve the same freedoms as you, especially went it comes to sharing their lives with those they love.

To be sure, gays are not the first group to be discriminated against when it comes to marriage. Prior to a landmark Supreme Court ruling in 1967, interracial marriage was against the law in many states. Think about how unfathomable it would be for it to still be illegal today. Well, this narrow-minded, infuriating, fear-based effort to keep gays from marrying is just as unfathomable..
Posted by The Ostroy Report at 7:26 AM

You would do yourself a big favor if you dropped the angry rant attitude and addressed the issue with respect and dignity.

It's not a simple question, no one can argue that it is.

There are many people who sincerely believe that the traditional family unit is the foundation of society. There are rafts of statistics that show that when it breaks down, all sorts of negatives happen in society. All you have to do is look at the statistical changes that occurred after the Great Society's liberal welfare policy gave people tremendous incentives to break up nuclear units.

History has shown that a family is healthiest when children are raised with strong mother and father figures present in the household - something that is definitionally absent in a gay household.

Of course, it's true that gays who marry can provide a good home to raise children. And single hetero parents can as well.

The nuclear family has been provided many advantages to enhance it's attractiveness to continue the society. Health insurance for spouses, etc. Many of those benefits are based upon the traditional expectation that one spouse will neuter their productivity in the furtherance of enhancing the family unit - something that can but usually is not an aspect of a gay family unit.

There are plenty of responses to that - the most important of which is that sexual orientation is not relevant to a person's parenting skills and people are frequently called upon to pick up another parent's slack in myriad different ways.

But it's not a simple answer and certainly one whose progress is HAMPERED by the angry rants that you throw about.

You would do yourself a big favor by not wasting your time telling me how to write. If you don't appreciate what I have to say and the way I say it, move on. This may come as a shock to you, but I don't tailor my writing style to the whims of my readers. My readers either like who i am and what I say and how I say it, or they choose not to read.

I am for equal rights for gays, so this question is an honest inquiry.

The only difference I see betweeen the legal contract under the law with the consequent legal conditions, is a civil/legal matter which couples enter into.

On the other hand the word marriage when applied to this legal agreement conotes a religious and spirtiaul commitement between the two, having actually nothing to do with their relationship to the state. A coupld is not legally married without its being recognized by the state.

There is the possibility that some and perhaps all religions will refuse to perform a "marraage ceremony" which should have nothing to do with the legal union recogznied by the goverment as legitimate and the couple is "married."

So why isn't it that the government performs the legal requirements for a "marraige"union, valid whether the "churcHh recognizes it or not; and, hereafter, the religious ceremony of "marraige" in the church is not connected to the status of the provisions of couples' contract recognized by the government? One is the required legal structure and the other the required religious agreements by each religion.

In other words -- sepration of church and state.

Anonymous - it's only a complicated issue if you're a bigot, which you clearly are. As the judge's ruling showed, there are NO statistics which show that children raised by gay parents are any worse off than those raised by straight parents.

Really, we keep debating the ridiculous. People like you need to truly admit why you fear and/or hate the gay community so much.

It is beyond pathetic that you would go out of your way to try and deny a large group of people equal rights.

I have been married for 35 years, grew up with an effeminate kid who became one of the early AIDS victims, had gay friends in high school, worked among gays for almost 50 years, and I am using these experiences to post a challenge to the so-called Christians out there preaching hatred and violence that "their" Savior would angrily disavow:

Explain to me in clear terms -and not in religious gibberish you don't understand yourself- how allowing gays to share the joys, pains, and legal rights of marriage in any way harms me or my relationship to my wife of 35 years. Explain how society is harmed in any way by gays who aren't likely to reproduce being allowed to marry when 25% of American kids today suffer poverty because you self-righteous Pharisees won't tithe unto Caesar as you do that charlatan huckster whose pernicious rantings you swallow like Jim Jones' Guyana Blend.

You cannot, for there is not one shred of truth in your hateful rants.

First, let me state that I'm a different Anonymous. Now a quote from the article:

"Maybe you actually want some of that gay action, and rather than be honest with yourself about who you really are, you amp up the testosterone and lash out at those who are living truthfully."

I'd just like to point out that a more recent study shows kids of single parents doing as well as those of two parent households, when there is a stable home setting. Let's get away from the myths about single parents too.

that's all one url, no spaces. too wide to fit in the textbox

For the life of me, I cannot begin to understand how it is that same sex marriage is going to undermine "marriage" as an institution. It isn't as if, by legalizing gay marriage, more heterosexuals will suddenly opt into marrying their same sex best friends. Divorce does more to undermine marriage than anything, but I don't see nearly the amount of fervor towards it.

We're far away from it simply being a religious institution too as long as the government gives benefits to married couples. The government can make this all square by taking away said benefits and being completely impartial. Let the churches do their thing and let the domestic partnerships do theirs. But I doubt anybody will go for that.

And plenty of heterosexuals get married and never have kids or are unable to bear any. They are not the traditional family that religious folk speak of yet they get all the benefits of a married couple.

Meanwhile, I would like to start a family and raise kids whether I have a relationship with either a man or a woman (I'm bisexual). The latter is the likely scenario, but I never know who I'll meet. And if I did happen to meet a man, I would still want to raise kids, even if they're from a surrogate or an adoption.

Perhaps what frustrates me most about the Right is that legalizing gay marriage would actually be well in line with their philosophy, that of limited government involvement. But here we have the government dictating who can or cannot be a legally recognized married couple.

And all this doesn't even touch upon the most loathsome criticism of gay rights: the almost knee jerk reaction of the Right to compare homosexuality to pedophilia.