An Open Letter to Newt Gingrich 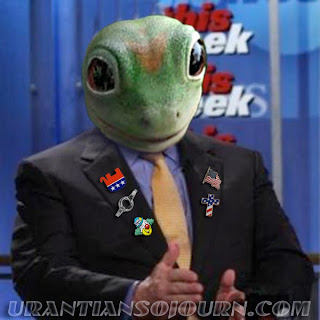 Dear Newt (May I call you Newt? Not because I seek any sort of convivial familiarity, but simply because you remind me of a slimy lizard):

There's been lots of speculation lately as to your political motives and aspirations, and whether or not you're planning a run for the White House in 2012. So I am here to ask you, in fact beg you, to please run for president. There, I've said it. And I mean it with all the passion and dedication of a card-carrying liberal who wishes to see your political fortunes erupt like Mt. Vesuvius. And if I may be so bold as to ask, even beg, for another favor...please name Sarah Palin as your vice-presidential running mate. This would be a Tea Bagger's dream ticket, and a Democrat's wet dream ticket. My goodness, I believe I just soiled myself a little just thinking about it.

Yes, Newt (snake would be so much more of a fitting name, no?), you should definitely run for president. What else should a delusional, narcissistic, self-aggrandizing, hypocritical Republican such as yourself do, just sit around raising tens of millions of dollars a year for your 527? What good does that do the GOP when you can perhaps control the joystick on the Oval Office desk? You know you want it, man! In fact, you want it so bad you can taste it. You've wanted it for so long, and ya know what? You deserve that damn Republican nomination. After all you've done for the party? Who else should get it, some comatose drone like Tim Pawlenty? Paw-leeze! Or some bug-eyed cartoon-character like Bobby Jindal? Or the GOP's Breck Girl, Mitt Romney? Or the Mama Grizzly herself, Palin? No, Newt, this nomination is yours. You're the one all those anger-drippin' Tea Baggers want.

Just think, after you and The Wasilla Wonder are nominated you can start thinking about your cabinet, and how you can stock it with brilliant 21st Century thinkers and bridge-builders like Rand Paul, Ken Buck and Sharron Angle. Sean Hannity could be your Communications Director. Rush Limbaugh your head of Community Outreach. You can even revive Dick Cheney and appoint him your Middle East Special Envoy. I hear they just love him over there. Good grief, man, just think about the bazillions of fired up Tea Party peeps you'd draw to the polls.

Now here's the good part. If you run, we on the left will tear into you like a Republican Congressman on a House page. We'll remind everyone at every turn that you cheated on and shamelessly and unceremoniously dumped two sick wives. How you had an affair with your much older high school teacher and your much younger aide before marrying these mistresses. How you asked wife #2, Marianne, to "tolerate" your tawdry affair with future wife #3 Callista in some sick, kinky open-marriage fantasy. We'll resurrect the 1982 House Banking scandal and your 22 bounced checks. We'll bring up your 1984 and 1995 book scandals. We'll dust off the GOPAC scandal and revisit your illegal use of non-profit funds for political purposes. And we'll expose your "family-values" hypocrisy 'round the clock like a McDonald's drive-thru. We'll slap the immoral, radical, fringe, dangerous tag on you so often and so hard you'll feel like you went 15 rounds with Mike Tyson. We'll play your smug, arrogant, defiant "It doesn't matter what I live" quote so much you'll feel like you're in elevator-music hell. And by the time we're done with you, even someone like Dennis Kucinich will be able to beat you. And just think...I haven't even mentioned yet what we'll do with Ms. Hopey-Changey-I-Can-See-Russia-From-My-Window.

So whattya say, Snake, you up for the challenge?
Posted by The Ostroy Report at 7:17 AM

Superb! Wish I'd said that.

Be careful what you wish for. Americans have already shown themselves to be morons. If they weren't, Sarah Palin would still be the little-known governor of Alaska and Sharron Angle would still be an activist for eliminating black high school football jerseys.

Don't wait, Andy! The sooner he's on the defensive, the better! Of all the Republicans vying for control of the GOP, he's the one who concerns me the most. I feel that only he could lead the Tea Baggers back to the GOP and actually gain that permanent majority he threw away with his misbehavior.