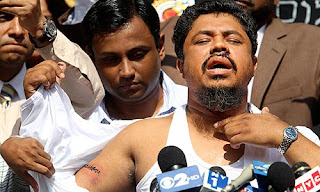 The despicable partisan-fueled campaign waged by Newt Gingrich, Sarah Palin, Rudy Giuliani and other leading Republicans to demonize the entire Muslim faith is unfortunately starting to influence the misguided racist animals who hear this fear-mongering and in a warped sense of patriotism take it upon themselves to protect America against the big bad Islamic bogeyman they're told is out to get us.

What the GOP leaders and right wing media have been doing is spewing racist venom and heightening tensions over the planned Muslim community center and prayer room two blocks from Ground Zero. They've been stirring the pot of ignorance and hate with broad brush accusations against the center's leaders, its funding sources and alleged connections to terrorists (where have we heard that one before?).

"Are you a Muslim?" is what 21-year-old Michael Enright asked cabbie Ahmed H. Sharif Tuesday night in Manhattan, following up with "Salaam aleikum" (peace be with you) and "How's your Ramadan going?" It quickly turned ugly, with Enright cursing at the driver, screaming "This is the checkpoint, motherfucker" and "I have to bring you down." He then whipped out a hunting knife, slashed Sharif's throat and stabbed him in the face, arm and hand. The wounds required 22 stitches, and Sharif was released from the hospital ok but understandably scared and shaken.

Congratulations Newt. Congratulations Sarah. Congratulations Rudy. And congratulations Sean Hannity, Rush Limbaugh and all the other Republican rabble-rousers who are front and center in this controversy. Sharif's blood is on your hands. You are the ones responsible for this attack....because you are doing exactly what George W. Bush did nine years ago when conflating al Qaeda terrorists with Saddam Hussein and Iraq, turning the masses against an easy scapegoat. You're the ones who are now conflating the 9/11 terrorist attacks with the entire Muslim faith. You're the ones filling Enright's and others' heads with not-so-subliminal suggestions of violence and revenge. Sharif was lucky. The next victim of your incendiary rhetoric and hate-speak may not be.

And, here's the kicker: as Jon Stewart brilliantly pointed out this week, Fox News has accused a Saudi prince as being behind the terrorist-sympathetic group funding the downtown NYC Islamic center. And this radical Saudi is none other than Prince Al-Waleed bin Talal Saudi, who's just happens to be the second largest shareholder in Rupert Murdoch's News Corp which, you guessed it, owns Fox News!

Posted by The Ostroy Report at 2:49 PM

It's not really racist. Islam is no more a race than catholicism.

It's so much easier to be a racist bigot than it is to examine difficult topics and decide where one stands. Because the GOP is pandering to simplicity for simpletons, can there be any doubt that the tactic works for a significant portion of the population? The real issue is why this bigotry resonates with smarter people as well.

Am I the only one who feels that it's all slipped away from us. We now read that the repubs might take over both the House and Senate. And if the repubs do take over the House they plan on investigating Obama!!!

Wake up. Just because we have not gotten all we wanted from Obama and the Dems, do we really want investigations for the next 2 years!!!! Come on folks. Please think long and hard about what this would all mean.

So Right wing rhetoric caused this wing nut to harm a Muslim? The presence of both simultaneously confirms cause and effect?

I guess then, the anti-black southern rhetoric, principally sourced to white Democrats makes the Democrats responsible for all those lynchings? After all, Democrats supported slavery and caused the civil war.

Leftwing pro Communist rhetoric made an anti communist attitude dangerous. I guest the left is responsible for JFK's assassination.

Hitler rose to power while FDR was president. Are democrats and their isolationist policies responsible for WWII and the holocaust?

Be careful about cause and effect. It can bite you in the butt

It's 8/30/2010 and I haven't heard a thing radical Imans or the Islamification of America, the "issue" has vanished from Fox...

Either the "intellectual" underpinning has been ridiculed so much that the middle ground is moving to support the Cordoba House...

...or Rupert Murdock kowtowed to Al-Waleed bin Talal like he did to China.

Rahm needs to get Obama back out there and pound this one, to show people how wrong their "feelings" are about these GOP-media-machine constructed issues.