Will Prop 8 and Gay Marriage Derail the GOP this November? 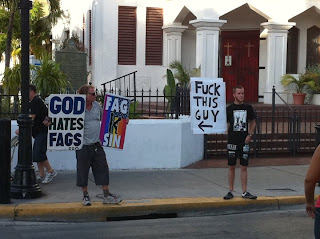 Just when the sputtering economy was seemingly presenting Republicans with the well-paved road to victory this November along comes Proposition 8 and gay marriage, the political equivalent of GOP crack. And these self-righteous morality junkies just can't get enough. They're addicted to guns, God and gays, as well as immigration and abortion, and relapse during every campaign they wage. Watch it be the death of them in the midterms as they embark on this diversionary homophobic witch hunt while 14-million Americans are unemployed and the poor and middle classes have been financially ravaged. To Republicans, It's the homo's, stupid! Can Karl Rove be far behind?

The economy is still facing unprecedented challenges, especially in the jobs market, as Friday's disappointing employment report indicated. But all the GOP has to offer voters are spending cuts on the lower and middle classes and huge tax cuts for the rich. It's the same old song. Nothing innovative. And not terribly popular with middle-America. Which is why it's so easy for them to lose focus and fall back into their comfortable hot-button social issues trap yet again.

Voters lapped up that polarizing rhetoric during the Bush/Cheney/Rove glory days. They astoundingly put aside their own financial interests and tapped their personal prejudices instead. While Republicans are predicting massive victory this year and a repeat of their "revolution" of 1994, that victory was fueled by New Gingrich's Contract with America which focused on issues that had broad popular support like welfare reform, term limits, tax cuts and balancing the budget. The Gingrich army didn't invade our bedrooms, as the current leadership is trying to do. And that will be political suicide. Voters are much more focused on economic issues this year, and any attempt to divert them away from their pocketbooks will be a disaster for the GOP.

On a completely different note, here's a little question for my Republican friends: how come Obama, who you label as the most liberal president in history, is against gay marriage? And, why would he appoint a Supreme Court justice, Elena Kagen, who's said there's no constitutional right to gay marriage? I'll be waiting for your answer....
Posted by The Ostroy Report at 9:45 AM

Andy, hate to tell you, but the only Republicans reading your wonderful blog are opposition researchers whose job it is to read your blog and of course the pundit classes. Real red-state Republicans DO think that Obama is in favor of gay marriage, in fact they think he's going to force them to divorce their spouses and marry people of the same sex. And of course they think Kagan is gay-married herself and will be an activist judge that will force Obama's nefarious plan into their homes. You know the red-staters categorically resist and deny things such as truth and facts because it doesn't fit in with their rigid narrative.

If progressives/dems feel this is a major election (which it is), and come out and vote, we should do fine. But I fear the impatience of many progressives will turn it over to the repubs. How they can forget the Bush/Cheney years and how it will be more of the same if the repubs are in charge is beyond me. When will they wake up, when it is too late?

@12:46, what you fail to recognize is that a good portion of the left thinks it already IS more of the same. Bailouts for the bankers and nothing for the little guy; escalation of war in the Middle East, to what end nobody knows; failure to come to terms with the fact that our planet is overheating and that our consumption of fossil fuels is driving it; the list goes on. As someone once said, given a choice between a Republican and a Democrat who acts like a Republican, the voters will go for the real thing.