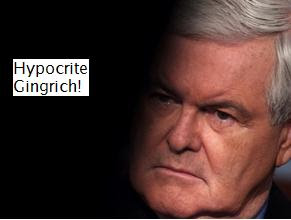 If Newt Gingrich expects to run for president in 2012, let alone win, he better think again. Seems his ex-wife Marianne has a little score to settle, and has gone public in a scathing magazine interview about her former hubby's kinky past, especially as it relates to marriage. Thanks to Mrs. #2, we've now confirmed what most of us have known all along: that when it comes to family-values, Gingrich, like most Republicans, believes there's two sets...one for him and one for everyone else.

So what's in Newt's closet? Well, Marianne unloaded her bombshells in ESQUIRE's September profile of the former House Speaker. Here's some of the juiciest revelations:

-That he met his first wife Jackie when she was his high-school geometry teacher. They married when he was 19 and she 26.

-He later dumped Jackie, while she was recovering from cancer, to marry then-mistress Marianne.

-He later dumped Marianne, for mistress and eventual third wife Callista, while she suffered from Multiple Sclerosis (apparently Newt has huge issues with the marital vow "in sickness and in health"). While married to Marianne, Newt wanted her to "tolerate" his affair with Callista, who is 23 years his junior.

-In answering an incredulous Marianne who questioned his hypocritical public family-values grandstanding while cheating on her with his much younger aide Callista, Gingrich arrogantly replied: "It doesn't matter what I do. People need to hear what I have to say. There's no one else who can say what I say. It doesn't matter what I live." Talk about delusions of grandeur.

Now don't get me wrong. In general, I sit in judgement of no one, especially those with marital failure and even infidelity. There's often more to a story than meets the eye, and no one's perfect. What a couple does behind closed doors is their business, not mine. But what I do have a major issue with is arrogant, self-righteous morality-cops like Gingrich who sanctimoniously lecture the rest of us on family-values while they're out cheating on their wives, screwing everything in sight. And in Newt's case in particular, even suggesting that the Mrs. sanction the affair. What kind of sick, twisted, radical family-values is that?

We surely remember how these skeevy hypocrites like Gingrich crucified Bill Clinton back in the 90's over his affair with Monica Lewinsky. He became just the second sitting president in United States history to be impeached. Yet one by one these witch-hunting hypocrites including Gingrich, Bob Barr, Henry Hyde, Robert Livingston, Helen Chenoweth, Dan Burton, John Ensign, Larry Craig and others were all subsequently embroiled in their own humiliating public sex scandals. These philandering phonies went ahead with their Clintoncide despite knowing they couldn't keep their own pants on. What unmitigated gall.

I cannot tell you downright giddy I am to see Gingrich's marital indiscretions broadcast for the entire world to see in all their disgusting, shameful, specious glory. No one deserves to be metaphorically stoned in public with his integrity and reputation dragged through the mud more than the smug, duplicitous, self-aggrandizing phony Gingrich.

As Stephen Colbert noted about Gingrich Wednesday night, "He's so morally upright he's only had sex after he was married, just not always to the woman he was married to."

It's hard to image Gingrich setting sail next year for a run at the White House. As I've written here on this blog years ago, his serial philandering will keep him from ever sitting behind the Oval Office desk. But if he does decide to defy conventional wisdom and run anyway, it'll be a lot of fun to watch him implode.

When will these glass-house-dwellin' Republicans finally learn not to throw stones...

The The Adrienne Shelly Foundation is a 501 c 3 tax-exempt, non-profit organization dedicated in my late wife's honor, and with a simple mission: supporting women filmmakers. Adrienne, who wrote, directed and starred in the hit film WAITRESS, was killed November 1, 2006. Through the Foundation, her commitment to filmmaking lives on. We've established scholarships, grants, finishing funds, screenwriting fellowships and living stipends at NYU's Tisch School of the Arts/Kanbar Institute of Film; Columbia University; American Film Institute; Women in Film; IFP; the Nantucket Film Festival; the Tribeca Film Institute; and the Sundance Institute. Your generous contribution will go a long way towards helping us achieve this very important mission. Please click here to make a donation. Thank you.
Posted by The Ostroy Report at 7:05 AM

However, we're not the ones solemnly moralizing on family values.

Hypocrites, thy name is Republican!

It is commonly said that the predicate offense in most crimes committed by politicians is typically the minor act - it's the coverup that kills you.

Nixon is generally Exhibit A in that case - most evenhanded people didn't accuse him of actually knowing about and instigating the break in. Rather he went to great lengths to cover it up.

Similarly, Clintons private misconduct was not a basis to disqualify him as a viable politician nor was it sufficient to impeach him.

But the top law enforcer should not criminally undermine the legal system. While practical considerations prevented indictment, he was undoubtedly guilty of perjury and obstruction for which he paid a steep fine and lost his license to practice law.

Gingrich on the other hand may have acted caddishly. But unlike Clinton and Nixon, he committed no crimes.

As much as I agree with your hoisting of Newtie-Pootie upon his own petard, I wouldn't count him out just yet. He appeals to that portion of our society that only utilizes its lizard brains for the purposes of hating, mating, and fighting. Thinking isn't a function of such a primitive organ, but it sure does react to the variety of stimulus Newtie-Pootie can deliver by the ton in his sleep. Ergo, as long as reptilians remain available to vote, Newtie-Pootie will play a political role no matter how vile he is.

Don't count NEWT out. All it would take for him to be a serious contender is to have Alaska's Mrs. Winkalot as a running mate. After all, most people do not know that Sarah graduated from Newt's Contract with America school in 1992. She has been being "groomed" for a long time.