Dear America: A Message From Your President 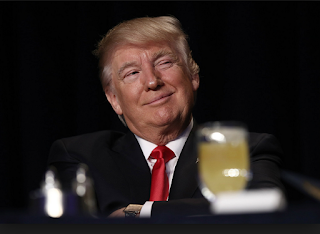 What a week that was, huh!? Just when you think things can’t get worse, they do! Jeb Bush predicted “chaos,” but I don’t think he could ever imagine just how chaotic it would get!

I’m gonna be honest with you which, as you know, isn’t my strong suit. Things are pretty messed up right now. I’m scared. Terrified, in fact. My former campaign manager’s been indicted, my former National Security Advisor just plead guilty to lying to the FBI, and he’s now singing like a canary in a karaoke bar. Then there’s my former aides Richard Gates, also indicted, and George Papadopoulos, also pleading guilty to lying to the FBI. And it’s just the beginning. I think my kids and Jared might end up in prison. It’s all crumbling.

I know I’ve called the Russia investigation a “hoax” and a “witch hunt” and nothing but “fake news.” But, you don’t believe that shit, do you? Believe me, Mueller scares me more than General Kelly...and Kelly’s one scary dude! He reminds me of my cold, mean dad. I crap my pants just hearing his footsteps. So, I’m screwed, believe me.

It’s obvious that my presidency’s as out-of-control as a New Jersey Housewives episode. You could almost see me and Rex Tillerson sluggin’ it out in the White House, right? Except that would never happen...because I’m not a fighter. I only talk tough. Remember Vietnam and the “bone spurs?” That was a good one daddy and his doctor concocted. Why do you think I love hangin’ around all those generals? Makes me feel strong and military-like...like that shit rubs off or something. But we all know I’m just a scared little child. A manbaby. Twitter is my Uzi. What these tiny little fingers can do with 280 characters! Watch out women, disabled people and military widows...I’m a digital warrior! But when I’m face-to-face? I cower like a frightened rat.

If you haven’t guessed by now, I really don’t give a shit about you, America, or anything or anyone but myself. I’m a slave to my rapacious ego. My Narcissistic Personality Disorder is swallowing me whole. The depth of my insecurity and self-loathing is staggering. I’m 71. This leopard ain’t changing his spots. It’s only gonna get worse...believe me. (Though I probably shouldn't call myself a leopard...Donnie Jr and Eric might shoot me).

I’m a political train-wreck. I cozy up to Russia, Nazi’s, white supremacists, the KKK, brutal dictators, Britain First and accused child-molesters and sexual abusers (of which I am one) while I disrespect and demean our allies, our judiciary, our intelligence community, veterans, the media and my own cabinet and staff. I lie to you 24/7. And, I’m utterly obsessed with Barack Obama. Honestly? I’m so jealous of that guy it’s killing me. Great wife, kids, reputation and people love him. And he accomplished so much. I hate him!

I say all the time that I’ve accomplished so much, but I know I haven’t done anything but sign executive orders undoing everything that Afro-Hawaiian guy did. Tax reform? We’ll see what those Republican idiots in Congress will do. They can’t even agree on what to order for lunch. And that Supreme Court justice? Does anyone really think I did that? First of all, you can thank that thief McConnell for it. I gotta admit: I’ve done some pretty shady shit in my life, but stealing that seat from Obama was a beautiful, beautiful thing! And, does anyone think any other Republican president wouldn’t have appointed a conservative justice? I did what anyone would’ve done. But you know how much I crave praise, so I'll happily take credit for it, believe me.

The craziest thing is that I have us on the verge of nuclear war and even that isn’t enough to stop me! As crazy as Kim Jong Un is, he’s Churchill compared to me! I’m about to send our soldiers to die (the sons and daughters of my BASE!) because I’m thin-skinned, lack discipline control and wouldn’t know diplomacy if it smacked me in my orange head.

And my sinking popularity...oy! Everyone hates me! There’s just different levels of hatred. There’s liberals, who hate me outright. There’s the Republican leadership and Congress, which hates me but can’t publicly admit it. There’s conservatives, who hate me but love tax cuts more. There’s evangelicals, who hate me for reminding them that they’re shameless hypocrites who hide behind the cloak of God. There’s my team—Kelly, Tillerson, McMaster, Mattis, Cohn, etc— which hates me but fears what I’d do if they weren’t around. And then there’s the base. They hate themselves, which explains how they could still support me. But, make no mistake: no one hates me more than me.

So I really gotta ask: what the hell is wrong with you people?! Are you ever gonna try to get rid of me? Will I ever be impeached? Indicted? Or removed from office by that stupid 25th Amendment thing? What will it finally take for you to say ‘Enough!?’ What more can I do to prove I’m a dangerous buffoon who’s so BIGLY unfit for office?

Will it all come down to Mueller’s investigation? This whole “Russia thing?” Hmmm...maybe it’s time to call Vlad and “WIK-ee-leaks” and see what they’ve got on Mueller...

Signed,
Your President
Posted by The Ostroy Report at 9:26 AM