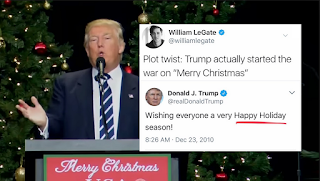 Enough is enough! It’s time! This all-out assault on Christmas has to end.

I’ve gotta be honest. As a Jew, and as someone who abhors religious persecution of any kind, I’ve been shocked by the virtual disappearance of Christmas. Been asking myself, “Where the hell did it go!? It’s become so invisible that it appears almost entirely lost from American culture.

And if that wasn’t enough, we’ve become inundated with all this Hannukah crap that society’s been ramming down our throats. Seriously, between Labor Day and New Year's that's all I see and hear....Hannukah, Hannukah, Hannukah. Every single day. Everywhere I go. "What are you doing for Hannukah?" friends, co-workers and even strangers ask. “What are you getting the kids for Hannukah?” And, "Did you get all your Hannukah shopping done!?" People on the street gleefully wish me a “Happy Hannukah!” Why do they automatically assume I'm Jewish? (must be the under-pronounced nose and the unblemished golden skin)

And if I get invited to one more office Hannukah party, or if I see one more damned "Happy Hannukah" sign, dreidel or Hannukah bush in one more retail store, I think I'm gonna convert to Christianity just out of protest! Oy, how I long for just one wreath! Some tinsel. Maybe some red somewhere. Just one day of walking around and you’d get the feeling that we’re a nation comprised of only Jews.

I feel really bad for all my Christian friends. That they have to be subjected to this kind of insensitivity is just so unfair! All they really want to do is celebrate their own holiday and not feel alienated from the rest of the country, yet Christmas has become utterly drowned out by the Festival of Lights. It’s eight days of torture for them.

So, I’d like to thank Donald Trump for being our brave general in the War on Christmas (even though he started it), and for his biblical effort to save this joyous holiday from the depths of irrelevance and obscurity.

Merry Christmas!
Posted by The Ostroy Report at 1:06 PM